This was not what the founding fathers had in mind on direct democracy; our correspondent ventures inside a laid-back rally aimed at softening cannabis laws. 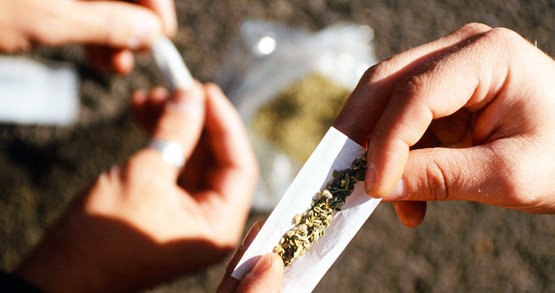 In the bowels of the Fox theatre, Boulder Colorado, a band of half-a-dozen white kids is cranking out Pick Up the Pieces, the Average White Band’s classic white soul anthem. “Yadadidadada dah da da dah de du dut da de duh dut. Yah da di duh …” Play and repeat, play and repeat. It’s a cavernous old picture house, the Fox, long since converted to a venue, the same sort of place you find all across the world, where I, and you have passed many of the best years of our lives, and some of the worst evenings, the old stage, the old screen, the barrel ceiling, the remaining ornate filigree work painted to black.

There’s only half-a-dozen people out on the floor proper, too; everyone’s milling in the foyer, which has its own bar. Bar-in-Star-Wars effect — dreads and army camo jackets, goth grrrls in black and black lipstick against white skin, close to monochrome, all Aubrey Beardsley, rockers in denim, big bearish guys in beards, and retro girls with henna bangs and polka-dot dresses. The brass section’s thin out here, but the bass bangs out of the walls, the aged plaster vibrating.

Everyone knows each other, or seems to — small college town social, checking out each other’s outfit. To one side there’s a table with the merch — not for the band, who are a local outfit, getting a free run, but for the cause. T-shirts, stickers and buttons featuring “64”, the big number, and beneath it that five-branch leaf, with its saw-bladed leaves, cannabis sativa, the flower of all our hopes, improbable symbol of freedom and liberty, to most kids 15 on up. Marijuana initiatives are nothing new — close to 20 states now have medical marijuana provisions, including Colorado. But this is something more — Proposition 64 is a measure to not only decriminalise marijuana use, but to tax it as well. The sale of marijuana would be regulated and individuals would be allowed to own six plants. By drawing dope into the tax system it would fully legalise it, rather than leaving it in a shadowy grey area where a blind eye can be turned.

Passage now looks likely — and whether Obama or Romney wins the White House, Colorado’s initiative, and a similar one in Oregon, will not merely constitute the greatest challenge to the failed 40-year “war on drugs”, but also stage one of the greatest state-federal confrontations since the founding of the Republic.

“Yeah do you know who we’ve got on side — the Governor, we’ve got Tom Tancredo, we’ve got the libertarians.” Behind the merch table, Betty, one of the campaign organisers, is bubbling with enthusiasm. She’s not from Boulder — it will turn out that practically no one running the event tonight is from in town — but she’s a true believer, hustling people to sign up for volunteer work, sign the petition, buy the T-shirt, make a donation. The band inside have switched to more gnarly jazzy free impro sort of thing, and the crowd is starting to flow in. “We’ve got Milton Friedman.” “Milton Friedman? Isn’t he dead?” “Yeah but he was very pro-drug legalisation — do you want to meet Mason?”

Mason is the organiser of Prop 64, and it’s no surprise, when he drifts over, glad-handing and greeting people as they pass, that he’s a dude in a shirt, a short-haired guy, and a lawyer. The shirt is yellow silk, a fine thing, shimmering in the light, but it’s a shirt with a collar and all, and you get the strong feeling that Mason would be more comfortable in a tie as well. “Yeah I’m a lawyer,” he says, a little defensively, “and I just got tired of seeing people get drawn into the criminal justice system for a little weed”.

Does he partake himself? He looks a little nervous, since as far as this question goes, there is no right answer. He’s an officer of the court, but he’s also the leader of a marijuana liberation organisation. “Yeah, well, I, uh, of course have partaken, but y’know, it’s not about the personal use, it’s about the law …” He wants to play down the radical nature of the measure, its capacity to impact on more than mere drug policy — and hence penal policy, less on the epochal constitutional challenge.

By now, the first white funk band has yielded the stage to, another white funk band. They’re better, but it’s not the wildest variety of music. They sure like their funk up here. Turns out they’re a band called “The Motet” and they’re quite something, because everyone rushes the stage. Notes and memory suggest they did a few Talking Heads numbers with a phat layer of horns, but further information as to their provenance is unforthcoming (when I Wikipedia them, I’m asked “do you mean The Motels?” — yes, Wikipedia, yes I do, now that was a band).Having talked to a bunch of folks who ran Boulder’s college radio, I went out into the side alley, and coming back after that my notes get fuzzy. Some is talking to me about 420, the dope protest day on April 20 every year. “Man the cops really whaled on us this year,” someone says/white funk white funk/tattoed bleach blonde at the bar/they love their white funk I say/yes we do/LUG city LUG city college town after all/Philip Larkin? (Philip Larkin? What the hell was that reference?)/dancin’ in the street is the founding US myth/older cohort drifting in/”I came here to study in 1972″, “and never left, right?” “That is correct sir”/Bob and Silent J emerge beside me/scuzzy bubfuss Green Day perhaps? Ficus co-regulator. Who’s basking a bit guzzly. Or something.

Proposition 64 is one of hundreds of “special measures” on various state ballots across the country in this election. Many of them are piddlingly and bewilderingly minor, about road-widenings or rezonings, the remuneration of water board commissioners, or the ratification of a new state motto. But they also have the power to shape people’s lives, far beyond the power of those elected. California has hocked itself into bankruptcy by a series of contradictory measures that limit tax increases, while also demanding that the education system keep pace with other states in education levels, etc.

The proposition capacity of such elections are often taken as evidence of the democratic genius of the founding fathers blah blah, but in fact such measures only arose during the populist revolution of the 1890s and 1900s, the same era that created the primaries in the form we know them now. They’re exactly what the more conservative founders of the Republic feared — popular processes that disconnect policy from reflection, the part from the whole, politics from government.

More recently they have become part of the wider process of the culture wars in post-Reagan America. Colorado has had a more interesting time than most — for more than a decade, it was the home of the “personhood” amendment, an attempt to rewrite the state’s constitution to have full human life defined as beginning at conception. The amendment would have made the law utterly capricious — as opponents pointed out, it would have made a woman suffering a miscarriage liable to a prosecution for homicide through criminal negligence. Many of the mainstream anti-abortion groups opposed the use of the measure as a political tool, arguing that its absurdities would damage the larger cause — to create a “human life” amendment for the federal constitution, which would thereby circumvent Roe v Wade, and criminalise abortion.

But Colorado is ground zero for the culture wars, a “new west” state, where a hip liberal crowd round Denver and Boulder go up against a huge fundamentalist Christian community based around Colorado Springs and points south. So the personhood amendment was put up year after year, obliging pro-choice groups to come out and fight it toe-to-toe each time, lest its seemingly innocuous language — after all, who could be against human life? — fool enough people to take it over the line. Nothing indicates the difficult task that the American liberal/left faces better than such fights, in which massive and exhausting energy must be devoted to combating pure absurdity, and essentially fighting to a draw. But such fights have their uses, for they keep political formations together, they are a defence against lassitude. Progressive measures such as prop 64 then arise, and have a formation ready to fight for them.

The populists intended that special measures would create direct democracy — bypassing the rule of professional politicians often elected via obvious vote-rigging. Yet in the current era they’ve become something else — an assertion of group identity, a way of making meaning in the larger flux of American life. The crowd here bleeds from the hardcore stoners in their rasta tat, and greaseball furry freak brother deshabille, to those who will form the next generation of progressive lawyers and other professionals. They are fighting not merely to make legal the consumption of one weed, but to define themselves, and define their state, and then the US, more in their image than in that of their opponents, who have been caught napping by prop 64’s widespread support — some polls suggest it may pass by around 65% of the vote.

The founders established a legal/political order in the hope of defanging fanaticism and the idea of a nation as that of armed camps. Instead they have created the opposite in an era where the greatest shortage, the greatest hunger is for meaning, identity, for a tribe, even if it ruled by the cannabis-kitsch imagery of the head shops. They have created a society in a state of permanent political war, for better and worse, a wrenching bout every two, four years, and then before the next regime is even sworn in, start it all again. Yah dah di dah dah pick up the pieces, pick up the pieces.

* For Rundle’s verdict on today’s US presidential debate, check out the Crikey website this afternoon

NMaybe, just maybe, Obama had something on his mind

They’re pretty stunning figures on male incarceration.
10% of the male pop have been in prison!!!
The ‘private’ prison industry is obviously alive and kicking.

I lived in Denver in 2005 when the city ‘decriminalised’ marijuana. It passed with 54% of the vote. There wasn’t much put forward at the election (tax increase, spending cap, school board election) so turnout was expected to be very small.

Question 100 made personal posession of less than 1oz legal in the city, but it remained illegal in the state and country. Mason Tyvert did an excellent job rallying young (high) people to vote in an off-year when it would normally only blue-hairs and soccer-moms at the polls.

I’m surprised that the movement has gained enough momentum to be able to pass during an election that will be well-attended.

“Life is an immobile, locked,
Three-handed struggle between
Your wants, the world’s for you, and (worse)
The unbeatable slow machine
That brings what you’ll get.”

Well if that slow machine brings me 6 plants growing happily in my backyard, my outlook will be much more optimistic than Larkin’s …. and perhaps a little more akin to Rundle’s, who obviously inhaled on this one.

It has become increasingly obvious that the US is currently engaged in its Second Civil War, and has been for some time. I just don’t get the feeling there is anyone capable of delivering a second Gettysburg Address.