Ten's new layout fails to impress as it struggles to woo back viewers. This and other media stories of the day, for Crikey readers to digest.

Ten in 2013: old, bold, obvious. The ratings-challenged Ten Network produced its 2013 line-up today, and it’s a sad story of the old, the bold and the obvious. The old in such stalwarts as MasterChef and The Biggest Loser, plus NCIS, the bold in the free-to-air rights for the rugby union (which moves from Nine), plus the Hopman Cup, which used to be on the ABC in summer. And if I was to say to you that The Simpsons was returning to Ten’s main channel, would you be surprised? That’s another example of the old, but not so bold.

Ten started its 2013 sell today after Seven launched its 2013 season last Tuesday night. Nine launches in November. The obvious part of the launch was the hard sell from Ten CEO James Warburton, who said in a statement today:

“For 2013 we have developed a schedule that builds consistency for our viewers and advertisers and will build our audience. It is a 40-week plan, consistently targeted with authentic Ten programs. Familiar, successful franchises will be in our schedule week in, week out, as well as a large number of new shows.”

He would say that wouldn’t he? To say anything else would be to throw in the towel. Among Ten’s new shows is Reef Doctors with Lisa McCune, which seems to have missed the bus this year. Among all the drama of management changes, ratings collapses and terrible shows in the wake of the London Olympics, Reef Doctors has slipped into 2013. — Glenn Dyer (read the full story here)

News buries the Leader in Victoria. News Limited’s struggling suburban print arm has moved to ape its giant-killing rival The Weekly Review, as the battle between REA Group and 50% Fairfax-owned parent company Metro Media Publishing ratchets up. Yesterday, Melbourne’s leafy suburbanites in the MMP-dominated Glen Eira and Port Phillip areas were shocked when their regular dowdy Leader appeared in letterboxes in extra-glossy format with the word “Leader” buried in the top left-hand corner. The new size and layout bears a striking similarity to The Weekly Review, as this revealing photo illustrates … 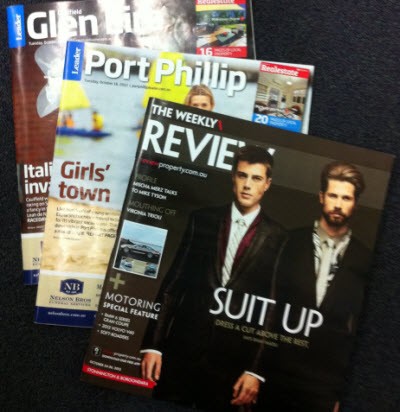 The Weekly Review recently launched three new editions — The Weekly Review Eastern, South East and Bayside in addition to the established Weekly Review Stonnington and Boroondara and Weekly Review Ivanhoe & Valley. Despite a flat market, the war for Melbourne real estate ads has involved allegations of inappropriate junkets being lavished on agents by REA that may be illegal if their value is not passed on to vendors. MMP has retaliated with aggressive emails to agents accusing their rivals of extreme inappropriateness. — Andrew Crook

Economic woes? Think Powerball. An excellent editorial in today’s Cairns Post imploring readers to forget their economic troubles and start gambling to achieve freedom. The paper explains that two local newsagencies have begun to offer a jumped-up Powerball syndicate arrangement that, according to the Post, “is believed to be a first in the region, Queensland and possibly the country”. 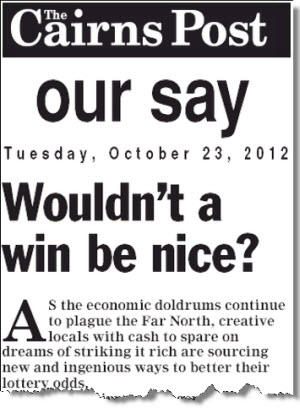 For just $1000 a pop, desperate locals can substantially improve their odds:

“While a regular Powerball ticket gives players five numbers plus the Powerball, the syndicate offered 15 numbers including Powerball four times to total 60 numbers. After all, there are better chances of getting six numbers from 15 than six out of six.”

With the Far North’s “struggling economy and jobless rate about twice the national average”, it’s time to put it all on black. “People in the Far North are desperate for a dream to cling to, and there’s not better dream than winning millions and no longer worrying if you’ll have a job to go to tomorrow.” All Power to them. — Andrew Crook

Video of the day. The US election is on a knife-edge and the lead candidates are battling it out once again today in their final televised debate. A bunch of American women — including artists Lena Dunham, Miranda July, and Carrie Brownstein — are calling on womankind to rise up and vote for Democratic candidate Barack Obama. “Our safety is at stake. Our silence is consent and our vote is our voice,” they say.

Front page of the day. Centre stage, indeed. The US presidential candidates are in Boca Raton, South Florida today for the third and final debate ahead of next month’s poll — we sincerely hope the “I didn’t want to kill him” heading does not refer to either candidate. 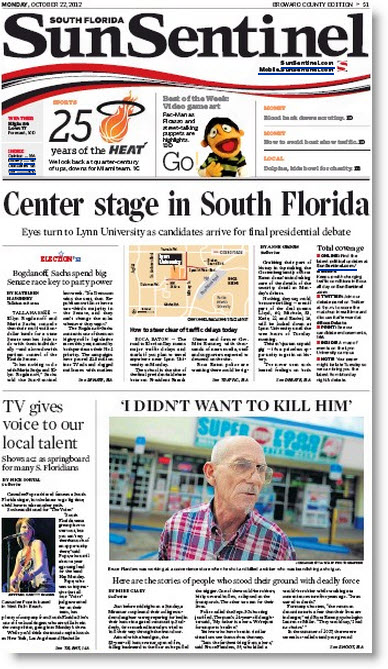 Legal action over phone hacking has spread for the first time to newspapers outside Rupert Murdoch’s British company with four law suits filed against Mirror Group tabloids. — The Australian

The New Yorker picks a side

“But the reelection of a President who has been progressive, competent, rational, decent, and, at times, visionary is a serious matter. The President has achieved a run of ambitious legislative, social, and foreign-policy successes that relieved a large measure of the human suffering and national shame inflicted by the Bush Administration. Obama has renewed the honor of the office he holds.” — The New Yorker

“Change.org, the online social movement company founded on progressive values, has decided to change its advertising policy to allow for corporate advertising, Republican Party solicitations, astroturf campaigns, anti-abortion or anti-union ads and other controversial sponsorships, according to internal company documents.” — The Huffington Post

Six Italian scientists and an ex-government official have been sentenced to six years in prison over the 2009 deadly earthquake in L’Aquila. — BBC News