Hard times for union members at The Launceston Examiner? ... another green boo-boo from the Libs ... Harry Jenkins' younger years ...

Is there power in a union? It seems not at Launceston’s Fairfax-owned daily, The Examiner. A mole from the far south tells us of a “nasty little fight” at the paper, which has long been light-on for union members (compared to the other Tassie dailies, The Mercury and The Advocate).

“The paper pulled a swiftie in 2009 and moved editorial staff onto the worst redundancy provisions in Australia. While all their Fairfax colleagues get four weeks redundancy for every year of service, those at The Ex get the basic NES provision. Workers were worried it made them a big target and so it proved — a couple of weeks ago four subeditors were made redundant. Funnily enough, they happened to be the four most prominent journos fighting to restore the standard redundancy provision and led the fight against the company’s appalling EBA offer.”

Our newsroom mole reckons management has brought on another EBA vote, where they are more likely to get their way because the unionised subs have gone “and there’s no one left to direct the fight against the EBA”. We hear management blocked a staff meeting last week with MEAA federal secretary Chris Warren, saying staff were “too busy” to attend. “Morale is rock bottom and many staff members, particularly among the subs, are seething at the treatment of their colleagues,” our insider says.

These developments are part of Fairfax’s new Tasmanian sub hub, which opened this month. The new regime means subs at The Examiner and Burnie’s Advocate now work across both titles. Total positions are said to have been reduced by eight; the company says 25 subs will staff the hub. While The Ex has got rid of four subs, sources at The Advocate (which apparently has a much better EBA) say only one sub was sacked; three more whose positions were axed were redeployed within the company.

A spokesman for Fairfax said:

“Fairfax Media knows its industrial obligations and complies with them, including consulting with employees and their representatives. A proper process has been conducted in both these matters — to suggest otherwise is completely incorrect. The EBA negotiations are ongoing and nobody is being “shifted” … The EBA negotiations are quite a separate matter to the staffing changes relating to the sub hub.”

The spokesman said the union meeting in question “did not proceed at the desired time because it conflicted with production requirements. We offered to reschedule to an earlier or later time but that offer was not taken up. We had no information about whether or not Mr Warren was going to be at that meeting.”

Know more? Drop us a line, and you can stay anonymous.

Liberals don’t like the environment. After Richard Farmer last week pointed out the federal Liberals’ webpage on climate change policy was blank, we bring you the next instalment in the Liberals apparently not giving a damn after matters green (this is from the same website; an eagle-eyed subscriber drew our attention to it). Obviously there’s not much time spent on environmental matters — or they might know how to spell it.

Pollies’ photo gallery. It’s been an eye-opening experience for Tips curating readers’ photographs of politicians from years gone by. Our personal favourite remains the pic of federal Labor MP Stephen Jones, although colleague Melissa Parke’s 1985 role as an Apple Queen is also memorable. Meanwhile, there seem to be very few photos kicking around of Joe Hockey or Julie Bishop, which has us very curious indeed. Can you help? Send us your photo by email or post any damning evidence to the address on our website. Meanwhile, these two gentlemen have certainly changed over the years — carrot-topped ex-Speaker (and who isn’t an ex-Speaker these days?) Harry Jenkins on the left, while a boyish Bob Katter is on the right. 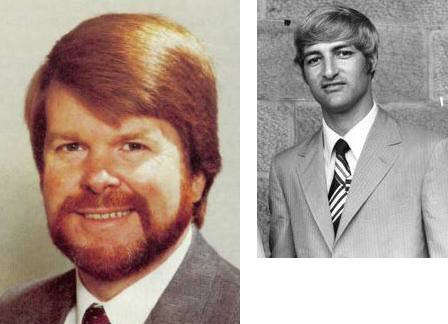 Photos from days gone by with comment attached are so instructive. Bring them on peoples. Now is the time! Edward james

Lets see them! And make it soon.

It depends on who controls the Union? Members or management! Edward James