There was one major thing absent from the Liberal Party's ACT election campaign. There was no attempt to develop a team of strong independents whose support could be relied on if elected.

Wise Crikey readers? If Newspoll follows the lead of AC Nielsen then the wisdom of Crikey readers will be shown. Nielsen’s 4 percentage point lead for Coalition on the two-party preferred measure is about spot on the mid-point of the predictions made by the 553 participants in our snippets pick the Newspoll survey. 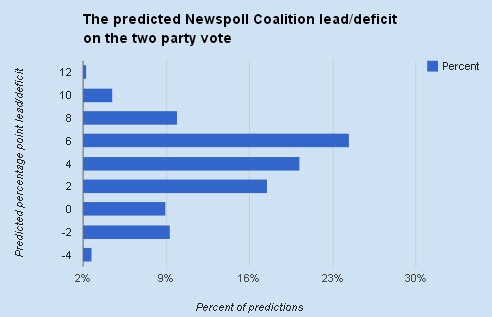 The prediction of what will happen to the approval/satisfaction rating of the Prime Minister also coincides with the Nielsen finding. A considerable majority expected Julia Gillard’s rating to go up. When it comes to Tony Abbott’s approval, Crikey readers clearly don’t expect to see an improvement when Newspoll delivers the “official” verdict. 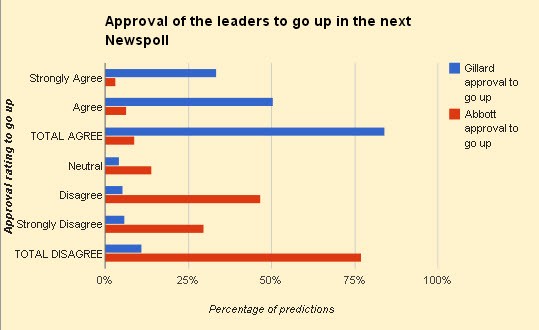 The missing Liberal ingredient. There was one major thing absent from the Liberal Party’s ACT election campaign. There was no attempt to develop a team of strong independents whose support could be relied on if elected. The Greens are never going to support them in the assembly and it is purely wishful thinking for them to try and persuade them even though they look like ending up as the party with the most members. The lesson of the success of former Liberal Chief Minister Kate Carnell has clearly never been learned. It was strong independents that enabled her to govern.

Making reform meaningless. The language of politics is a wonderful thing. My favourite is the way every change made by government is a “reform”. Like today’s announcement of a further cutback in the benefit for taking out private health insurance.

Words worth noting. As you consider the importance of today’s deficit-cutting  announcements by Treasurer Wayne Swan, just keep in mind this quote for the day from the FDL website by David Dayen:

What this debate showed, beyond any shadow of a doubt, is that actual Americans, those who live outside the Beltway and don’t frequent think tank panel discussions or green rooms for cable news, don’t give a damn about the deficit. At all.

Here’s the debate transcript. There were 18 references to the deficit. They all came unprompted from the candidates, when they were asked about subjects like job prospects for college graduates, tax deductions, differentiations from George W. Bush, the Obama record, and wage competitiveness with China. 11 of the references came from Obama, and 7 from Romney. And none from any questioner.

… I’m not always partial to the idea of the wisdom of crowds, but in this case, the political class would do well to follow the public. Polling consistently shows that voters don’t care about the deficit, and last night’s breadth of topics showed the same.

The group that consistently cares more about the deficit are, simply put, rich people. They don’t want their hard-earned massive tax cuts to get clawed back because the deficit gets so high that they can no longer use the “job creator” charade to shield themselves. So they obsess about the deficit, as a means to cut anything but their tax cuts. That’s the game. And the rich spend tens of millions to make that a reality, shaping opinions in Washington. The Democrats have sought to become the party of austerity in many ways to curry favor to a political class that demands so-called “fiscal responsibility.” But in reality, without our large deficit, we would not even have the recovery we have, a recovery that has outpaced the rest of the world, particularly in Europe, where they are mired in far more damaging austerity.

The more politicians realize that the public does not share the concern of the Beltway establishment on the deficit, the better off they — and the rest of us — will be.

Surely the time is nigh for a poll on whether the Crikey snippets poll will accurately predict the next Newspoll poll.

Richard, are you serving up this dreck on a dare?

Zut Alors
What an excellent idea!
People eventually might get the idea that polls are meaningless almost all of the time. Anything I can do to help that along I will do without anyone needing to dare me.