Obviously The Age struggles with Mandarin as much as Tony Abbott, because the raw footage shown above the article on Kevin Rudd's speech doesn't correspond with the translation that appeared.

Rivers of lead in scooped AFR. Another bad Saturday for The Australian Financial Review‘s weekend edition. Not only were the number of ads low to non-existent for a 64-page paper, but the rival Weekend Australian and The Sydney Morning Herald had more display job ads than the AFR. On top of that, the AFR was scooped by the SMH: it ran a confected story headlined “Swan’s surplus way behind: Forecast” based on the budget claims of Canberra-based consultants Macroeconomics.

The firm, which boasts celebrity doomster Steve Keen in its ranks and appears to operate under the tagline “I can reach any star”, had predicted a $13.4 billion reversals in finances this year based on a $9 billion fall in revenue (in fact the fall was around $4 billion, this morning’s MYEFO numbers show). That this was labelled “exclusive” and run on page one was sad enough. But it looked outright amateurish compared to the SMH‘s Saturday edition, which had the real thing in a Peter Martin story “Budget shock: $21b shortfall”. Martin the nature of the revenue falls and size of the spending cuts and revenue measures the government would undertake to keep the surplus.

The weekend AFR had a total of 13 ads, five of which were house ads (Fairfax or AFR). Of the five pages of ads, it had around three pages of paying ads, or an ad ratio of 5%. And it had no display job ads at all in the weekend edition, whereas the SMH had 21 in its first section and the Weekend Australian 14 in its first section. One of the ads in the Oz was right up the AFR‘s alley: the head of government relations for the big gold miner, Newcrest.

Nearly all the jobs ads were for either the state governments or corporates. Some of these appeared in the smaller, 40-page Friday edition of the AFR (30 pages without the Review lift out, which is now eight pages instead of 12 previously, and the ad-rich Lifestyle lift out). Just why the weekend edition of the paper had 64 pages is puzzling, given it’s printing those extra pages at a loss. — Glenn Dyer and Bernard Keane (read the full story here)

Rudd’s stand-up routine. Obviously The Age struggles with Mandarin as much as Tony Abbott (and the Crikey newsroom), because the raw footage shown above the article on Kevin Rudd’s speech to a Chinese function doesn’t correspond with the translation that appears in the article.

Journalist Deborah Snow wrote: “Mr Rudd translated for himself into English as he went — though some of his English lines did seem suspiciously shorter than their Chinese equivalents.” We were curious too, but after having a Mandarin speaker watch it, they told us there’s no need for suspicion as apparently the phrases in Mandarin are just longer and more complicated than they are in English.

It wasn’t exactly “stand up comedy”, more polite and friendly chit-chat. Rudd says he can’t speak Cantonese, but then banters with the other speaker at the Chinese Memorial gardens event who was speaking in Cantonese, a joke that the crowd loved. But what got the crowd really giggling was when Rudd joked about his son-in-law Albert Tse’s inability to speak Mandarin. Of course Rudd would bring out the dad jokes … — Amber Jamieson

Video of the day. Could this be the next chief minister of the ACT? After the sole pre-poll for last Saturday’s election said ACT Labor were going to romp it in, the close results mean that ACT Liberal leader Zed Seselja could emerge as the territory’s surprise new chief minister. A Labor-Greens alliance is more likely, but Seselja made the case that his party (which looks like winning one more seat than Labor) was ready to lead in his post-poll Saturday night address to the party faithful. Seselja could be one to watch — whether it’s at the territory or the federal level. 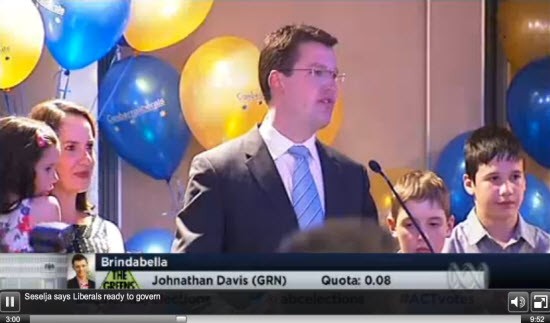 Front page of the day. The latest cover of The New Yorker is a ripper, paying homage to artist Norman Rockwell’s painting The Tattoo Artist in a statement about Republican candidate Mitt Romney’s past policies. 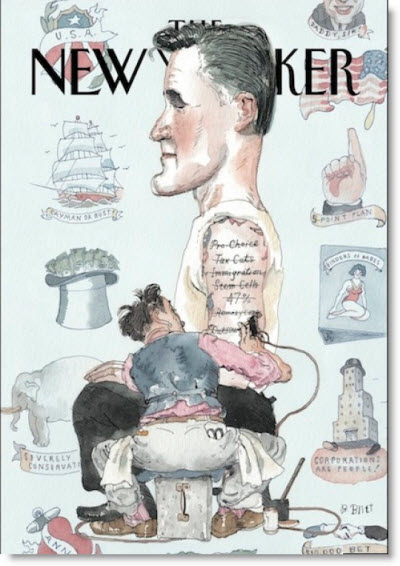 “With Tribune Co. expected to emerge from bankruptcy soon, News Corp. Chairman and Chief Executive Rupert Murdoch is looking to acquire two of its trophy properties: The Los Angeles Times and The Chicago Tribune — LA Times

“FRANCE 24 journalist Sonia Dridi filed a police complaint with Egyptian police on Saturday, a day after she was assaulted while reporting on a protest in the capital Cairo’s Tahrir Square. Dridi had just finished giving a live news report at around 10.30pm on Friday for FRANCE 24’s French language television when a crowd of men teemed around her, shoving and grabbing at her body.” — FRANCE 24

“Robin Parkes, who has been brought in as Magazine Publishers of Australia executive director, has been charged with bringing a more cohesive approach to the industry’s bid to convince advertisers and media buyers that magazines are as vibrant and powerful a platform as ever.” — The Australian

“Back in August, Victoria’s Secret accidentally published a set of two dozen raw, unretouched images from a photo shoot with supermodel Doutzen Kroes. Although we had to take down the unretouched images from our post after some kind of legal crap from VS, we knew the publication of the retouched versions in the brand’s catalog was only a matter of time. And now we can show you all the images, both before and after the VS airbrush job.” — Jezebel

The New Yorker with Mitt Romney getting tats – Hilarious!