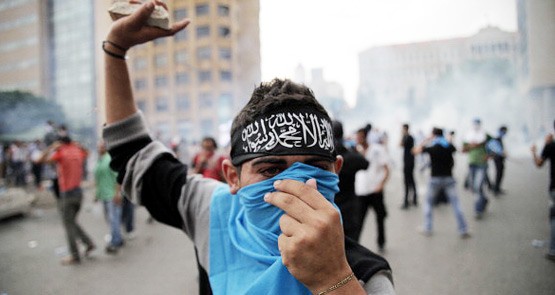 Lebanon buried the nation’s chief of intelligence of the Internal Security Forces yesterday, as mourning turned to violence that threatened to bring Syria’s civil conflict across the border onto the country’s streets.

The service drew tens of thousands to Beirut’s Martyrs’ Square, but degenerated into violence after former prime minister Fouad Siniora called on the crowd to force the pro-Syrian regime government, which includes Hezbollah, from office. He branded it “the government of assassination” and whispers swept through the crowd the protest would turn into an attempt at storming the parliament.

The assassinated official, Brigadier-General Wissam Al-Hassan, was the victim of a car bombing on Friday afternoon, as he drove through Beirut’s affluent Ashrafriyeh neighbourhood. At the scene, devastated residents — 78 of whom had been injured — were in agreement about who was to blame. “This is Assad! This is Nasrallah! You know the truth!” screamed one woman, at the dozens of army and police who attempted to cordon off the scene.

He had been the highest profile member of Lebanon’s intelligence services, after master-minding the arrest of a former minister, Michel Samaha, for allegedly importing explosives from Syria to conduct attacks in Lebanon. Although the thought of having to import explosives into Lebanon raises eyebrows, and Samaha has not yet been tried.

At the parliament, a large army presence was able to repel the crowd with tear gas, and Siniora quickly urged calm, saying: “The use of violence is unacceptable and does not represent the image that we want”. In spite of this, by nightfall armed Sunni opposition forces had set up roadblocks, and were patrolling neighbourhoods across Beirut, threatening to bring the increasingly sectarian conflict in Syria to Lebanon.

Earlier, the chief of the Lebanese Internal Security Forces spoke about Al-Hassan to the crowd as, a man who “put the interests of the nation before his own” from the foot of Beirut’s great mosque. Though in the crowd, many tried to turn Al-Hassan into a martyr for radical Islam.

Omar, a 27-year-old Islamist who had travelled to Beirut from the north of the country, explained that his hope for the future was: “Only revenge against the pigs, Bashar Assad and Hassan Nasrallah [general-secretary of Hezbollah], they want to murder every honest person in this country, and we will avenge our brother, Wassim Al-Hassan.”

The official photograph of Al-Hassan, which stood behind barricades at the head of the crowd, was draped with the flags of not only Lebanon and the parliamentary opposition, but the Free Syrian Army and the radical Islamic Salafist Group.

“The radical Islamist elements of the opposition are making a play for leadership,” said a Western security analyst who spoke on condition of anonymity. “They want to cut Hariri out of the picture,” he said, referring to Saad Hariri, the son of Rafik Hariri, the Lebanese prime minister who was assassinated in 2005 in a similar car bombing that is widely blamed on Syria or pro-Syrian elements in Lebanon. Al-Hassan was a security advisor to Rafik Hariri at the time, and was laid to rest alongside his former prime minister in the tent-tomb that has occupied the centre of Beirut for the past seven years.

Even though Al-Hassan, and all of the speakers at the three-hour event, were Lebanese, thousands in the crowd were Syrian. “We are here because of what Al-Hassan did for us; he died for us, and we want to bring justice to his killers,” said Majid [not his real name] a 21-year-old Syrian who fled Aleppo six months ago. “I had to leave because they wanted to arrest me, many Syrians must be in Lebanon now.”

Within hours of his assassination, the Free Syrian Army claimed it had named a brigade after General Al-Hassan. Although many protestors blamed Hezbollah, the armed Shia movement aligned with the Syrian government, for the assassination the organisation has remained quiet. “Hezbollah are being very smart,” said the Western security source. “They are not presenting the opposition with a target, so the Sunni militias can’t escalate the situation into clashes between themselves and armed Shia groups, but whether that changes in the next few days is the biggest threat to the situation escalating into something more deadly.”

Fighting in the aftermath of the funeral was contained in the northern city of Tripoli, where Sunni militia traded fire with Allawite allies of Syrian president Bashar al-Assad, where three have been confirmed dead including an eight-year-old girl. The Lebanese army also traded gunfire with opposition forces in the Bekka valley which runs close to the border with Syria.

Prime Minister Najib Mikati has been left in an unenviable position, having tendered his resignation after Friday’s bombing, the President Michel Sleiman refused to allow him to leave office, citing fears of a “power vacuum”. His premiership has now become the pretence for violence across the country and a second resignation would be seen as a major victory for anti-Syrian forces in Lebanon.

But the biggest risk could be Syrian or Shiite retaliation to the opposition. “The assassination showed that the Syrian state is strong enough and bold enough to hit anyone they think needs to be dealt with, even members of the state in the most secure areas of the country,” explained the Western analyst. “We know that their allies, like the Syrian National Party, are in the streets now and if you start to see exchanges of fire between them and the opposition, things could escalate very quickly.”