The whole idea of public servants deciding what is true and what is not is a step too far towards governments controlling our thoughts.

A Jones joke. At our house we listen to Alan Jones over breakfast — thanks to the wonders of the internet — and The Australian is our first newspaper reading choice. For me it is a simple matter of preferring an alternative view of events to my own. Sometimes my chosen morning media pair annoy me, sometimes amuse and occasionally make me think again about my existing convictions. To me they provide a more interesting start to the day than tuning into Fran Kelly and reading the Sydney Morning Herald to largely get reinforcement.

I certainly don’t feel subverted by either and share the majority public view reflected by the opinion pollsters that not everything said or written should be taken as gospel truth. Having expressed my own share of factual mistakes and overstatements during 54 years in journalism I am sceptical of comments like Jones’ “human beings produce 0.001% of the carbon dioxide in the air” but don’t expect him to give a radio equivalent of an academic footnote to explain his evidence for it.

Which brings me to the nonsense yesterday of the Australian Communications and Media Authority deciding that there must be “pre-broadcast fact-checking by the program’s executive producer of any material provided by non-media sources or third parties which may require additional confirmation and attribution”. What a boring radio program that could result in. The whole idea of public servants deciding what is true and what is not is a step too far towards governments controlling our thoughts.

I’m in agreement with that other radio spruiker Derryn Hinch who, while speaking with the Deputy Chairman of ACMA, Richard Bean, scoffed at the orders given to Jones, including attending training sessions on factual accuracy and Commercial Radio Codes of Practice, and ensuring the station presents alternative and significant viewpoints on issues of public importance either in Jones’ program or elsewhere on the station, 2GB.

“I’ll be damned if somebody’s going to tell me that you haven’t aired enough of the other side of (an) issue. You’ll have to let somebody do it on your program. I’d say go hee.”

What a pity that the management of 2GB did not take the same view instead of supinely submitting to ACMA’s whims.

Wayne would approve. Third party endorsements live on. This one from Bruce Springsteen on his official website:

Springsteen, whose We Take Care of Our Own, President Barack Obama has adopted as a campaign anthem, appeared overnight at an Obama fund raiser in Ohio on the same platform as Bill Clinton. 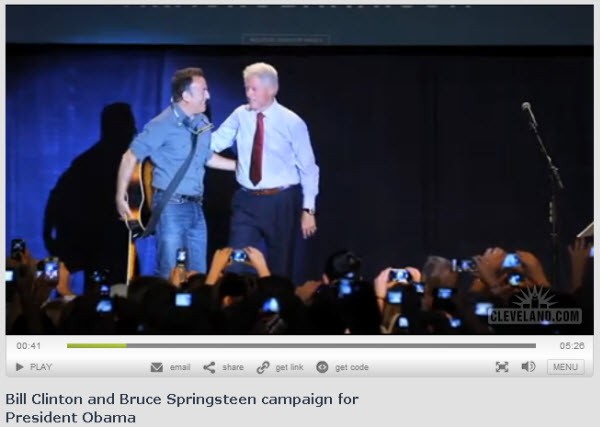 Perhaps the only disappointment for our Springsteen adoring Treasurer Wayne Swan is that former President Clinton did not bring his saxophone to the event as a replacement for the late Clarence Clemons.

Too churlish for words. So spending a few million on giving Australia a greater say in world affairs by being elected to the UN Security Council is dismissed by Opposition Leader Tony Abbott as “expensive”. What a small minded man he is.

Confusing opinion polls. The ups and down of Australian opinion polls have nothing on those in the United States with the difficulties of gauging where opinion really is for the presidential election made difficult by there being so many of them. Take, for example, this assortment of the most recently released: 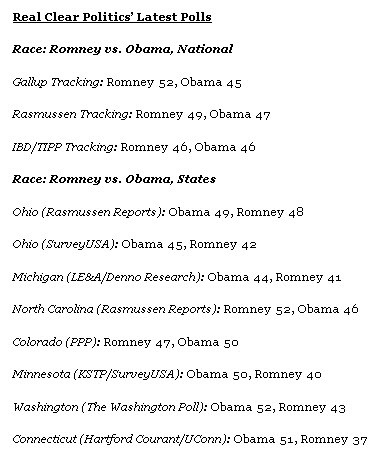 Romney on 52%, 49% or 46%. Take your pick. I’ll stick with the market for guidance with the long established Iowa Electronic Market putting the likely end result at Democrats 52.5%, Republicans 47.6%

And having turned the subject to polls, a reminder that my own little snippets attempt to have my readers predict the next Newspoll finding is still awaiting more contributions HERE.

All the evidence so far points to a big improvement in support both for Prime Minister Julia Gillard and Labor.

We will see on Tuesday.

Where’d you get the idea that public servants would be doing the fact checking? It says it’s his executive producer who’s responsible for doing that.