Another editor leaves Fairfax, The Week magazine finally shuts its covers and all the best media news of the day.

Fin slams its own op-ed. The Australian Financial Review has today hit back at an opinion piece it ran yesterday. The op-ed was written by Susan Sheridan, a retired professor of English and women’s studies. The piece discussed the ugliness of misogyny following the Macquaire Dictionary’s update of the word’s meaning this week. If you wanted to know about the fluidity of misogyny’s definition, Sheridan is an obvious choice.

But in today’s editorial — titled “Australia is not misogynist” — The Fin said it “champions free debate” before going on to attack the professor for stating that misogyny existed as a cultural norm, not an individual pathology, calling them “ridiculous”. Guess Sheridan won’t be appearing in its pages again then?

More talent on the way out at Fairfax. Today is the last day for EG editor at The Age Jo Roberts, who is leaving for “more family time”. The deputy editor of EG will be taking the top job, but Roberts’ adds another name to a growing list of Fairfax departures.

Department of Corrections. The Australian Press Council has found in favour of a complaint raised by the community action group Save Albert Park over “official crowd” of the Australian Grand Prix as it was reported in March this year. The Age reported the “official” numbers as “313,700 through the turnstiles, the biggest crowds since 2005”. But there were no turnstiles, as SAP argued, making the actual number of attendees unquantifiable.

“The only reference to any dispute about the success of the Grand Prix was very brief and related to its overall financial impacts on the State, not to attendance figures. Other references conveyed a favourable view of the event’s success. Accordingly, the Council considers that the articles were not sufficiently fair and balanced and the complaint is upheld on those grounds.”

On page eight of The Age today you can find the lengthy Press Council findings. The SAP group has been campaigning to have the Grand Prix moved from Albert Park, with the event’s dwindling numbers being one of the main weapons in its arsenal. 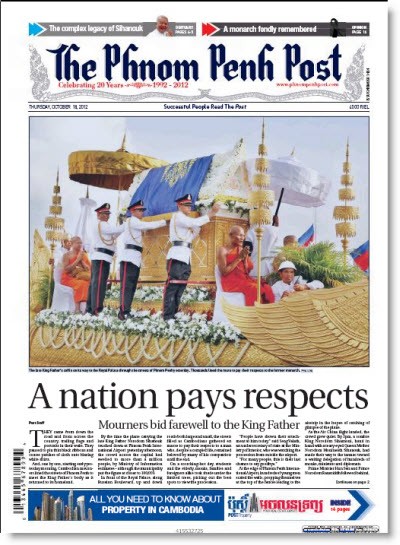 Video of the Day. Awww, poor old Finland. Their bid to win a seat on the UN Security Council is Finnished, courtesy of … well, us. So they’ll just have to go back to their nude saunas, enigmatic rock bands and air-guitar heroes. Not that we want to gloat, but this promotional video for the Finns’ bid to join the Security Council — featuring their long-running national UN character “Pax” (why don’t we have one of those?) — makes for good viewing.

“Current affairs magazine The Week is to close its Australian edition after four years of publishing. The title, which was launched in Australia by British publisher Dennis Publishing in 2008, has told its subscribers that the 12 October edition would be its last.” — Mumbrella

“The chief of the Taliban in Pakistan has ordered his followers to target media organisations critical of the group’s attempt to murder 14-year-old Malala Yousafzai.” — The Guardian

Afghanistan and Iraq through the eyes of a non-embedded journalist

“Frustrated with his own limited access to the Afghan side of the war, Mr. van Agtmael, a Magnum associate, decided to stay in a guesthouse in Kabul following a 2007 embed.” — The New York Times

“Ten staff will have a week to consider taking voluntary redundancy, before management sets out to meet rumoured targets of 40 jobs in Sydney, 23 in Brisbane, 22 in Melbourne, 18 in Perth and 13 in Adelaide.” — The Australian

I’m tempted to copy and later paste Susan Sheridan’s hilarious piece on language next April Fool’s Day. While she has thankfully retired from teaching ‘English’, she has a future in progressive comedy.
Fortunately, in our postmodern world, I shan’t even need to worry about plagiarism?