Billy Bragg sings for the supper of ‘insecure’ workers

The ACTU's campaign against insecure work is ramping up. This morning at Melbourne's Southern Cross Station it found a star singing recruit. 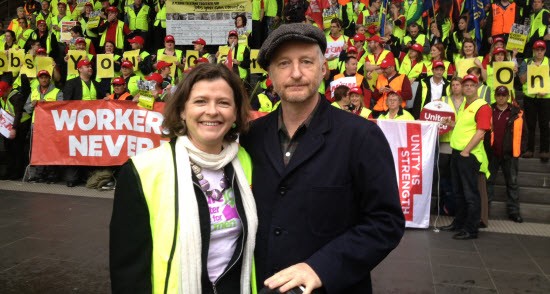 Woodrow Wilson Guthrie penned those famous lyrics last century, but for Melbourne commuters shuffling to their cubicles this morning it was Billy Bragg delivering them in a lilting London accent with a similar weary gravitas.

Bragg was drafted in to perform for a forest of hi-vis National Union of Workers members (and a few union officials) for its anti-poverty week campaign, the two-song set also signalling an escalation of the ACTU’s multimillion dollar federal election campaign on insecure work.

The NUW says casuals are now so widespread among some industries that the days of sidling up to the meatworks at 5am waiting for the boss to pick out day labourers seem sepia tinged.

Power in a Union got an inevitable airing alongside I Ain’t Got No Home but Crikey’s hopes Bragg might bust out last year’s updated version of Never Buy the Sun (“someone’s hiding in the bushes with a telephoto lens / as their editors assure them the means justify the ends”) were dashed as the Occupy member made way for Charles Firth and a strange musical chairs game.

A hepped-up Bragg noted that tomorrow’s Trades Union Congress protest in central London should see about 500,000 people on the streets. The Guardian reported this week that the turnout could easily morph into the first UK general strike since 1926.

Earlier, insecure work specialist Brian Howe offered a rousing gee-up, perhaps only bettered by his legendary rallying of Batman locals during his 1976 Horace Garrick preselection smackdown. The former Deputy PM recalled that the 1973 Henderson poverty inquiry found no one with a job was poor. “You can’t say that today” when one in every four workers is a casual, Howe said. Two-thirds of all NSW TAFE workers are casuals and every industry, including government, is privatising its workforce, he thundered.

Despite its political wing’s continued exclusion from Victorian Labor’s stability pact, the NUW has been one of the more visible industrial players in recent times after successful sit-ins at Baiada Poultry and Coles’ Somerton warehouse. State secretary Tim Kennedy has been keen to highlight the ABS’ recent Life on Struggle Street report, which says 800,000 households are doing it tough. As Bernard Keane noted last week, 15.3% of Australian households have reported absence of least three of the “essential” aspects of a comfortable life.

In between tunes, Bragg threw in some Keynesian theory, noting the UK economy was flatlining due to insufficient demand. Although that rule didn’t apply to his own output. “You can’t change the world by buying Billy Bragg records,” he said.

The op-ed rejected by the papers: unions and employers agree on skills