Mystery surrounds Austrade head ... the union election shrouded in cloak of invisibility ... which pollie looked like their dog in the 1980s? ...

Position vacant. We’re a little confused as to who is the CEO of the federal government’s trade-promoting squadron, Austrade. Peter Grey is leaving; is it true that his replacement is not available until February (if at all?). There’s no answers to the mystery on the Austrade website. An insider has told us to watch out for a “high-flying Sydney-based finance specialist, a Queenslander”. Know more? Drop us a line.

Largesse — for some. The NSW government may be on a mission to avoid wasting money on things like education services, paying public servants and running ferries, but Barry O’Farrell is happy to stump up $50 to allow each of his staffers to race in a corporate fun-run at Sydney’s Centennial Park. We hear an email has gone around the NSW Department of Premier and Cabinet offering to cover the registration fee. “Good to see Barry O’Farrell feels he can be this generous in his own office while clawing back conditions from staff in all other departments and crying poor,” our Macquarie Street insider says.

“I don’t know anything about your suburb, but I drive through it on the way to the Flemington Racecourse”.

Our tipster said: “Audience was too stunned to boo. The man knows how to win over the constituents.”

Tasmania’s cone of silence. Now this could really catch on: an election in which candidates are banned from campaigning for weeks before the poll. The Tasmania University Union (TUU) elections are on November 6-8, and “all face-to-face campaigning is strictly prohibited from Monday 22 October”. That’s because some genius has scheduled the elections for the exam period. An edict from the TUU states that there are to be no campaigning stalls either: “Posters are OK, but we ask that no posters are placed near exam venues.” Even if you place posters away from where the students are, there’s another rule to observe: no political material. “Political material (NUS exempted) … is not endorsed by the TUU,” a separate rule on poster content warns.

So, elections for a student union during the exam period, with no campaigning allowed. Should be a great voter turn-out! The Liberals don’t have to worry about reviving VSU — unions like this are driving people away all by themselves.

Pollies’ picture gallery. They may be the be-suited, august people who sit in our parliaments, but go back a few years and it was a different story for many of our politicians. Tips has issued a shout-out to the public for pics from pollies’ pasts (check out Apple Queen Melissa Parke and an activist Louise Pratt, both now federal Labor MPs). We note that most have been sent in by pollies’ “friends” and staffers. More, please! And why aren’t we getting any photos of Liberals?

We are forever indebted to Dermot Browne from the CPSU for sending us this pic of federal Labor MP Stephen Jones — we’ve created a “before and after” montage for you. Apparently Jones was setting off from Wollongong to cycle to Perth in the early 80s. “Funny how dog owners often come to resemble their pets …” Browne mused. 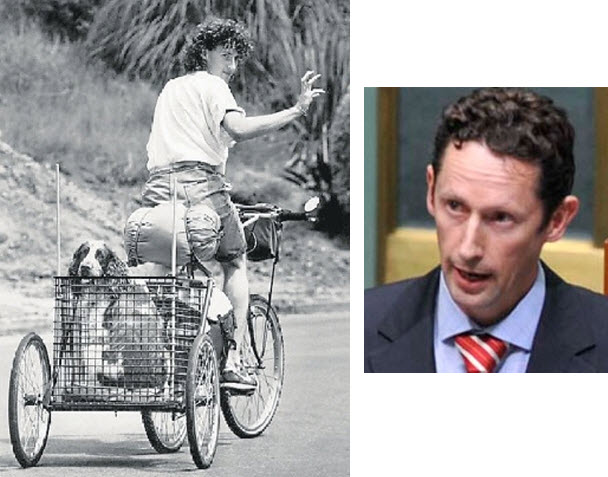 And here is a youthful Greg Barber (Barber is in the centre, meeting Bob Brown for the first time, in 1988), who is now the Victorian Greens leader. Greg, is that a mullet? Tips had previously claimed there were extra points for crimes against fashion. This was Barber’s response: “how many points do I get?” 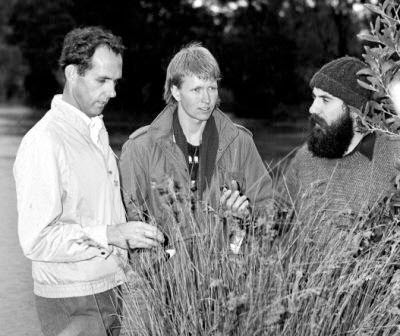 KK top of the pops, but a bombshell she ain’t

The O’Farrell legacy: a new model of government in NSW

Barry O’Farrell sticks his neck out on donations reform

Roadside signs don’t incite me to vote for the advertised person, if anything, the reverse.