Mitt Romney won the debate for the simple reason that Barack Obama lost it, our man in the US reckons. And the latest polling shows voters tend to agree. 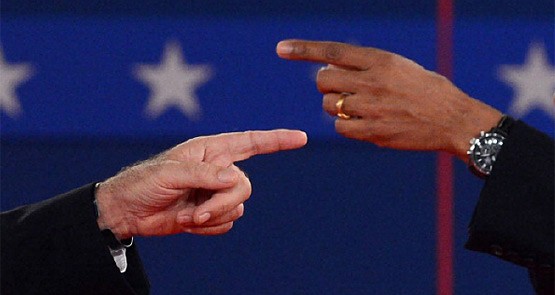 One day after the second debate, and the results are in — everyone thinks Barack Obama won it, or at least fought Mitt Romney to a draw. Instant polling after the event also gave Obama the win, with the CNN poll showing a seven-point edge over Romney: 46% to 39%.

It’s worth noting there’s a 4% error margin on that poll — but it’s also worth noting the sample was 33/33/33% Republicans/Democrats/independents, where the Republicans are actually only about 24% of the general population. So, to use a technical statistical term, eeeeh y’know.

The figures are also borne out by the qualitative analysis, with most pundits in the Mitt moshpit known as the National Review scoring it a draw, and the Left pundits who were tearing their hair out at Obama’s initial performance have come back to suckle at the teat.

Andrew Sullivan, ex-conservative and continuing doofus, was best: having previously dubbed Obama the “black Reagan”, he declared the election lost after the first debate, now returned, practically weeping, saying it was the “Obama I always knew”.

Well, maybe. Your correspondent, perhaps on a pessimistic jag, judged the debate a sort of win for Romney, which garnered a few hits from the peanut gallery. And when you look at the event in clips, with Romney’s various turns — cross-questioning Obama like a motel cleaner suspected of stealing his cufflinks, Obama saying that Romney’s five-point plan was a “one-point plan”, moderator Candy Crowley correcting Romney as to whether Obama had spoken of a “terror attack” the day after the Benghazi attack and, last but not least, Romney’s bizarre remark that people brought him “binders of women” to choose amongst in staffing his Massachusetts executive — there were no real clips showing Obama in a similar light. So that counts as a win.

But these are all victories on the pundit principle, of performance and besting. It’s not necessarily the way people watch the debate, especially those clowns (sorry, citizens) who are yet to make up their mind, between two substantially different ethical and political approaches to the organisation of society.

There, I thought, and still think, that Romney won the debate for the simple reason that Obama lost it. Though the President took the fight to Romney right from the top, he failed to follow through — coming back to his own record. Yet Obama’s own record only passes muster by reference to what would have happened had he not done what he had. The only thing that the middling American recovery looks good beside is the potential depression, unemployment spike and auto industry collapse that would have occurred — or can be argued would have occurred — had the Republicans got their mitts on the big House again.

That’s arguing a counterfactual, and difficult to do, but essential. The great example of that is Paul Keating’s 1993 victory over John Hewson, in which the prime minister stooped to jam it up the opposition leader’s freckle. The spectacle of the Blade Runner style blasted earth that would be implemented days after Hewson landed in the Lodge was sufficient to drive a grumbling populace back to Papa.

Obama hasn’t swung that, and there’s no chance he will really try. In the absence of such, Romney’s economic plan — ze plan, ze plan — continues to impress people. The polls bear this out. A CBS poll had Romney rated as better on the economy: 65% to 34%. That’s a major lead in the area where people will be listening very carefully. In that respect, I suspect there will be no major bounce back to Obama on the basis of his overall win.

Mind you, one poll had Obama winning by 51% to 17% among undecided voters. The poll in question was taken by, erm, Xbox, via a survey on Xbox Live’s “election channel”. Say what? No, me neither. But the Italian plumber vote is sewn up, blah blah, other sad lapsed cultural references, signs off, opens beer, sigh.

How could they all get it so wrong?

All hail the pollsters as Obama becomes a two-termer

…especially those clowns (sorry, citizens) who are yet to make up their mind, between two substantially different ethical and political approaches to the organisation of society.

Could not agree more. While there is something to be said for politics as sport/entertainment, it seems strange to me that so many are “floaters”.

Guy is getting the vote out going to make as big a difference this time as it did for Obama last time ? Has that tree been shaken and all the low hanging fruit is now taken into account ?

Well Guy, when it comes to who won or lost, it seems to me that you’ve fallen for (or been dragged into) the curse of the deadline. I think I prefer Nate Silver’s take, that it will take a few days to see just what the second debate has done to the polls.
Meanwhile, it *did* manage to give us the “women in binders” meme and that’s no bad thing.

This morning a Professor from Wollongong University was interviewed on ABC 97.3 and he added the most important fact – the lies that Romney is premising his statements with! His ‘math’ just don’t add up? He also mentioned that Obama’s support could be higher than posted? Perhaps Obama could’ve challenged him on more of these ‘incorrect policies’? When Romney asserted his ability to employ more people, he should’ve been challenged with his comment, that he likes sacking people? Such compassion for the unemployed? His taxes? His refusal to be accountable re his yearly incomes for the past 10 years or so? Why is that?What does he have to hide? Claims by him of Obama fostering companies in China, but wasn’t made to tell us how much of his investments are in China? Talks with a forked tongue in my view!

I watched the debate all the way through, and I kept on ‘talking’ to Romney about his so-called plans for the economy. He’s voted against much of what he now asserts while in front of the people. His running mate’s view of how he’ll ‘fix’ the economy has been disputed by people with heaps more knowledge/experience than I have. It’s more of the Republican’s war cry – tax cuts for the rich, and their distorted view of the ‘trickle down’ effect, which is bs, and most middle income and poor people know it – in all capitalist countries, not just the US.

Look at the so-called ‘remedies’ for countries like Spain, Greece etc. No tough restrictions on the rich, only the poor. Extreme hardship leading to huge increases in the suicide numbers. People starving including children, while the so-called ‘Leaders’ are still being driven around in their Mercedes? None of them look like they’ve had to tighten their belt? No weight loss that I can see? Still living OK in the top paddock? It’s obscene!

The Republicans will only cause further harm to those on the lower rungs of the economic ladder. Romney has already let us know what his opinion is of anyone on social security etc. Every accusation against Obama re the economy was caused on George W’s watch? The wealthy were allowed to commit crimes in order to feather their own nests. Monies, trillions of them, taken from the ‘ordinary folk’ to bail out the wealthy? THEN, when things started looking up, they were going to engage in the same behaviour/s? They were lucky not to have been lynched – such was the anger among the masses. Wonderful capitalism – bail out the crooks and greedy, and make the ‘little people’ pay. It’s called ‘socialising the losses and privatising the profits’?

Who started the two wars, that took trillions away from health and education for example. Romney’s pathetic example of his so-called positive attitude to women was a joke – except I wasn’t laughing! One thing extreme right wing politicians have anywhere in the world, is their attitude to women – patronising, churlish, inhibiting and sexist, misogynist even – that is, an ingrained negative view re the rights of women, from the cradle onwards. Romney’s “binder full of women” didn’t impress me. At the same time, he’d vote against ‘Obama Care’ even though it’s the same as what he introduced as Governor? Why is that? To make the misogynist Republicans in Congress etc happy, and to appease the Tea Party followers.

When they berate the Democratic Party for ‘big government’ it doesn’t include the sexual health and reproductive lives of women. No way! Some even go so far as to insist on women being ‘raped’ by an invasive vaginal ultrasound prior to having a termination. How can anyone who believes in the US Constitution have anything to do with such a gross view!If you believe that women are only chattells, play things, sexual toys even, it’s easy! I shakes me head! Freedom of speech, perhaps? More like ‘free if you agree speech’,(certainly was that way under Bush – I don’t think the PATRIOT Act has been repealed, has it?) the right to bear arms, too right! But the right to control your own personal space – your own body, NO? Hypocrites!

I don’t like what Obama is doing re foreign affairs, or should I say, war mongering and deliberate assassinations of ‘enemies’, particularly in Pakistan at the moment, but on domestic issues, they run rings around the Republicans re the whole country, certainly poor people and education! Hilary Clinton’s outrage over the attempted assassination of that very brave young woman almost made me puke? Every Tuesday, according to reports, Obama chooses who’ll ‘get it’ that week via drones? The 1.6 million dead in Iraq, and the almost 50,000 in Afghanistan – that’s the first time I’ve even seen a figure re Afghanistan. It’s probably way out – probably a lot more! No grief for them though!

The ordinary American person doesn’t seem very militant to me. They appear to put up with a lot without any protests or rallies etc. Perhaps we just don’t hear about them! They need to take more interest and start making some demands – such as free and fair elections! That’d be a good place to start! My understanding and from the ‘How Bush Won Florida’ experience is that the political parties/leaders have too much involvement with the electoral process. While that remains, it’s hard to take this seriously!

Lemme see if I’ve got this right: if you’re a woman but you’re not in a binder Uncle Mitt won’t let you into cabinet. Anyway, I think that’s what he said.