Adam Cresswell, health editor at The Australian, is leaving for greener fields. And the nation's tabloids go nuts for Julia Gillard's "leadership spill". Plus other media news of the day.

Oz exit: health editor goes corporate. As noted in a recent post, many journalists with long-standing experience and expertise in covering health, medicine and science have left mainstream media outlets. And today, news of another departure — Adam Cresswell, health editor at The Australian, is heading to the National Health Performance Authority as director of communications. He announced the news on Twitter, saying it’s a “big step” but he’s excited to help “drive a new venture that will ultimately improve health outcomes”. — Melissa Sweet of Croakey

Front pages of the day. It was the fall that stopped the nation. Or at least editors at News Limited tabloids, who had a field day with Phil Hudson’s copy from India on the Prime Minister’s latest slip-up …

“PM’s fall from grace,” The Daily Telegraph thundered, with an accompanying op-ed from gossip writer Annette Sharp reminding women of the dangers of high heels and grass:

“It is a handicap to glamazons the world over — particularly those with a soft spot for stilettos.

“And, coming as a surprise to many yesterday, it can also bring undone those women who prefer a sensible pump.”

Whoops! The Herald Sun found a double page for the “Bollywood bungle” — with nine photos capturing every micro-second and a front-page pointer to watch the Australia’s Funniest Home Videos candidate online. 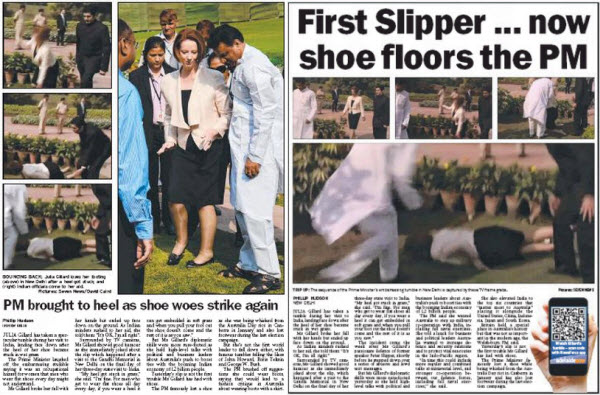 The Courier Mail had the PM “brought to heel”, while The Advertiser won best headline with its “First Slipper … now shoe floors the PM” (plus a pointer to the “LEADERSHIP SPILL” on its cover).

Veteran Age watcher Michelle Grattan told Radio National this morning that it’s a “cheap shot” to use Gillard’s fall against her. And yet her breathless copy was pumped into Fairfax websites yesterday afternoon and splashed on page four of The Age today (The Sydney Morning Herald, like The Australian, showed more restraint). If only the shoe was on the other foot.

Video of the day. We all know the feeling — someone is trying to explain their PhD thesis to you, and you can’t follow a word of it. Now there’s a solution: the enterprising “Dance your PhD” contest! You can check out the finalists of the comp (which is sponsored by the journal Science and its publisher) here, but a warning; this site is strangely engrossing. Here is the winning entry, submitted by Sydney University chemistry student Peter Liddicoat. 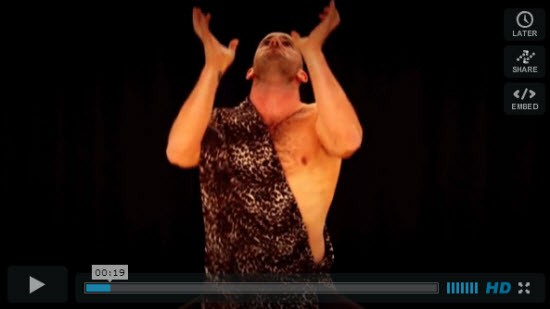 “Nine Entertainment Co will emerge debt-free with a licence to expand and pursue digital opportunities after its warring lenders yesterday agreed to a recapitalisation deal that will underpin its future.” — The Australian

Cameron quiet on those ’embarrassing’ chats

“David Cameron has refused to answer whether he held back dozens of communications between himself and Rebekah Brooks from the Leveson inquiry because they were ‘too salacious or embarrassing’ for him to reveal.” — The Guardian

“The second debate between President Obama and Mitt Romney reached nearly as many people as the first debate, according to Nielsen, reflecting robust and sustained interest in the presidential election three weeks before Election Day.” — The New York Times

How to Kickstart your journalism project

“Before you start a Kickstarter campaign, you better have a long list of people to tell about it. Otherwise, unless you’re lucky enough to have Kickstarter put your project on its homepage, few will even know it exists.” — Nieman Journalism Lab

Has anyone else noticed that the only time the big brave press and the big brave dunces have a shot at the PM is when she is out of the country. Geez she must be tough to turn all these heroes into chicken dung.

The woman fell over FFS! It is not Front Page News it is Funniest Home Videos.

…and should given all the credibility of that blight on television.