In a week when news beat entertainment programming in the ratings there was significant competition for most media mentions, writes Sentia Media's John Chalmers.

Through the course of last week Opposition Leader Tony Abbott was mentioned in the media more than at any other this time this year, and Prime Minister Julia Gillard was not far behind with media coverage shaded only by her leadership tango with Kevin Rudd back in February.

So is any press good press? Well not for Abbott, who can only take solace from the fact that most commentators agree he is not officially a misogynist, while he’s been deemed s-xist by many of the million social media viewers who tuned in when the PM turned what began as the defense of Peter Slipper’s s-xist texts into a stunning victory for feminism that went viral the western world over.

Following that spike, and despite few non-political stories to steal their oxygen, the pair’s numbers dipped a touch this week as footage of their respective foreign policy forays were met with mixed reaction.

And with Slipper relegated to the crossbenches to join embattled MP Craig Thomson, it seems a fair bet that Gillard’s recent uptick in the polls will soon be met with the type of parliamentary instability that typified her first year in office. But with only four members of the federal opposition making this week’s Top 20, it appears the government will have the show on its own terms for a little longer yet. 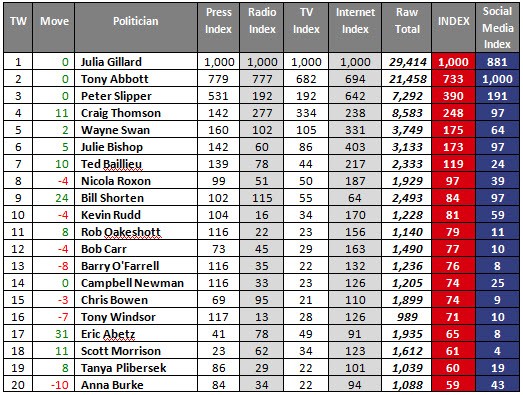 Social media and talkback radio sentiment aligned this week, with our analysis indicating the majority of talkback callers disapproved of Abbott’s “die of shame” comment in parliament.

There was only one show in town on the social network this week — the Gillard Explosion starring Anthony John Abbott. No cameo from K-Rudd.