Rupert, on his LA throne, banishes dissenters from his kingdom

That Rupert Murdoch was able to so easily dismiss dissent at News Corp's AGM today was not surprising. It was the farce of the whole exercise, as Crikey found in the heart of Hollywood. 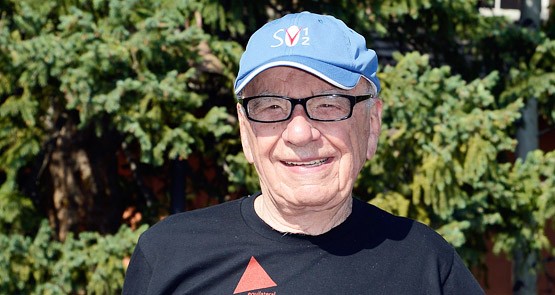 Despite the hype, no one really expected the News Corporation annual general meeting in Los Angeles this morning to sack Rupert Murdoch or transform the way he runs the company. But few could have predicted such a farcical affair.

The point of a shareholders meeting, after all, is to listen to shareholders. And some of the big institutions that own News Corp are pretty pissed off with the way the group is run.

So, the independent directors — led by Viet Dinh — did their best to lend an ear. But then the guy who really runs the company had his say.

Last week, Murdoch made it quite clear he was tired of shareholders complaining, and tweeted that they should “take profits and sell”. That is, more bluntly, f-ck off.

At the Daryl F Zanuck Theater today, one brave soul enquired whether Murdoch had really meant what he said, and whether they were all wasting their breath by asking for change. Without missing a beat, Murdoch replied that there were many media stocks on the market and if they didn’t like News Corp they should go and buy another.

“When you buy the stock, you know what the company is,” the 81-year-old CEO and chairman continued. “If you don’t like it, don’t buy the stock.”

So there we were in the middle of Fox Studios, surrounded by almost 100 years of movie history. And if I were a film buff I’m sure I could point you to the relevant scene. It’s the one with the king on his throne, surrounded by courtiers who laugh at his every joke. One by one, his loyal subjects approach and throw themselves at his mercy. Praising his wisdom and kindness, they beg to be heard. The king waves his hand, the courtiers laugh again and the petitioner’s claim is dismissed.

At least at the News Corp version, none of the complainers was in danger of being marched off by the black-suited guards to be locked in the dungeon, but their chances of getting King Rupert to cede any of his power were just about the same.

And power is what was at issue here. The petitioners’ fundamental complaint about News Corp is that Murdoch runs it like a family business, and has 40% of the voting power, even though he and his children only own one eighth (or 12%) of the company.

His defence of this arrangement, repeated faithfully by his fellow directors, is that the dictatorship has served the company well and made money for shareholders. And that is certainly true, because the share price has risen 45% in the last year and News is thriving while many media companies are taking their last breath. But Murdoch’s rule has also been responsible for some gross failures of corporate governance (of which phone hacking is one), and for some dodgy deals to buy assets from his family at inflated prices.

Even more to the point perhaps, it is likely to leave the company in the hands of a far less brilliant mini-Murdoch when Rupert finally leaves the throne.

So, a variety of resolutions were presented to this AGM to introduce more checks and balances and more democracy. First on the agenda was a motion to separate the roles of CEO and chairman, so that Rupert’s dominance is reduced. Second was a motion to change the share structure so that all shareholders have a vote. Both came with a huge amount of support from corporate governance advisors and independent shareholders — i.e., those outside the Murdoch family.

But they got precisely nowhere. Murdoch’s response was to proclaim at the end of his 15-minute intro, and before debate even began, that the votes had already been counted and the proposals defeated by “more than a majority of the votes cast”. He also informed shareholders that their attempts to unseat directors and vote against the executive pay package had failed.

“If the board wishes to ignore them it can. Indeed, even if a majority of shareholders were to vote against half the board of directors, they would still take their seats at News because there are no other candidates.”

He could hardly have made his message any clearer: I don’t care what you think, I’ve already made up my mind; you might as well all go home. Yet none of the petitioners was brave enough to point this out.

This year, the protest against the family and associated directors gained far less support, despite James Murdoch’s annus horribilis. But the two key resolutions did extremely well, winning a majority of around two-thirds of the non-Murdoch votes cast. Yet in spite of this they were roundly defeated because Rupert and his family had the numbers. The Murdochs have a voting bloc of 316 million shares, or 40% of the vote, and can rely on the support from Saudi prince Alwaleed bin Talal Alsaud, who owns a further 7%.

Even if the protesters had carried the day, News Corp would not have been obliged to do anything about it, because the resolutions are purely advisory. If the board wishes to ignore them, it can do just that. Even if a majority of shareholders had voted against half the board of directors, they would still have been able to take their seats at News because there were no other candidates.

But aside from the lack of action, there was fun to be had in observing it all: Rupert, looking bent and shorter and struggling up the steps to the stage; the “independent” directors all choosing pink ties while the executive directors opted for grey; the entire team of directors (at least the ones on stage) all laughing dutifully when Rupert made a nasty quip about The New York Times. That moment spoke volumes about who stands up to the boss.

There was also the process to savour: the black truckousines that ferried us onto the Fox lot; the besuited security guards telling us “this way, sir” and the ID and security checks to get us into the inner sanctum. There were even free copies of Rupert’s New York Post on offer, with a front-page headline announcing: “The Fallen Mighty”.

On this day, that certainly didn’t apply to the paper’s proprietor. Fifteen months after the phone-hacking scandal blew up, Rupert’s grip on power does not appear to have loosened.

All in all, one wondered why anyone had bothered to go, and certainly to fly in from the UK at great expense, as some of the shareholders had done.

At the end of the meeting, the advocates for change, led by Julie Tanner of Christian Brothers Investment Services, tried to put a brave spin on it by telling reporters these issues won’t go away and nor will they. But as Tanner also told Crikey: “It’s very disappointing. This does not bode well for shareholders.” What comes next? “That’s a very good question. It will be interesting to see … how the board responds.”

It seemed the board — and Rupert — already had. And that no king, least of all this one, gives away power to the people unless he’s forced to.

Right now — and for the foreseeable future — the force is with him.

The most dramatic News Corp AGM since Maxwell came to town

I expect any of you pundits with a clue could have predicted this. So why didn’t you?

The longer he reigns and flouts power the more I’ll relish his Rosebud moment. Patience…

That reminds me, I gotta buy the turkey this Xmas…..

I think the today’s real news was Murdoch’s latest broadside against his victims:

That “most humble day in my life” it seems, is a long way past. Remorseless bastard.