Employment rate of youths falls but rises for older workers. Figures released overnight show the OECD area employment rate — defined as the proportion of people of working-age who are employed — was 65.0% in the second quarter of 2012 while Australia was doing better than most. The figure for the OECD as a whole […]

Employment rate of youths falls but rises for older workers. Figures released overnight show the OECD area employment rate — defined as the proportion of people of working-age who are employed — was 65.0% in the second quarter of 2012 while Australia was doing better than most.

Australia certainly has fared a better than the OECD as a whole. Its second quarter employment rate of 72.5% was well above the average and only 0.7 points less than it was back in 2008. 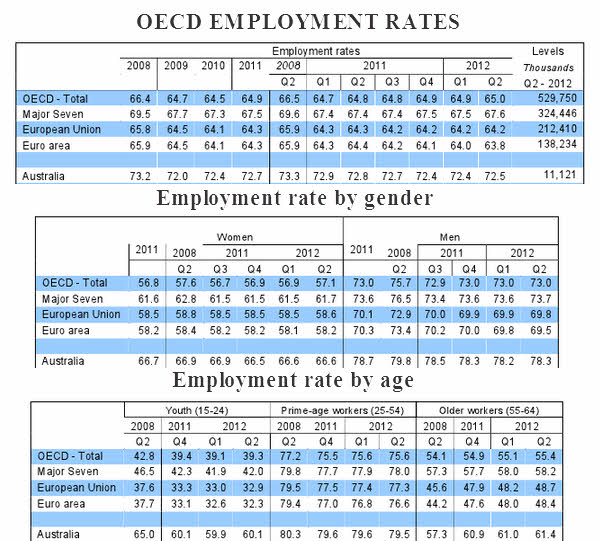 The Canberra Times to the rescue. At last a public opinion poll about the ACT election to guide us pundits and I’m scurrying to retreat. There are no figures yet on voting intention but a midday post on the paper’s website shows Labor Chief Minister Katy Gallagher has a commanding lead over Canberra Liberals leader Zed Seselja as preferred Chief Minister. The phone poll of 1203 eligible voters, conducted by Patterson Research Group between October 11 and 14, showed that 54% of those surveyed thought Gallagher would make a better chief minister, while 26% preferred Seselja for the top job.

Voting intention figures will be published tomorrow but with leadership figures like that the Liberal task is clearly enormous.

Looking in vain. I flicked through the pages of the Jakarta Post this morning looking in vain for a mention of Tony Abbott and his shadow cabinet colleagues. Not a mention could I see. Such is the importance of a visiting Australian Leader of the Opposition.

Political cats. I am anxiously awaiting an update on Jasper but can find nothing since this disturbing message: 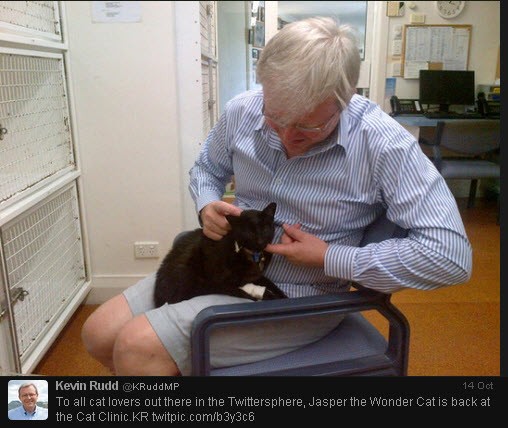 The Ruddster should be twittering updates more frequently to prevent growth of national hysteria.

In the meantime, this cat news from the United Kingdom. Downing Street has denied rumours of a feud between cats belonging to the chancellor and prime minister after they were pictured fighting. George Osborne’s Freya was photographed slugging David Cameron’s Larry with a nasty-looking left claw, the evidence being posted on Twitter. 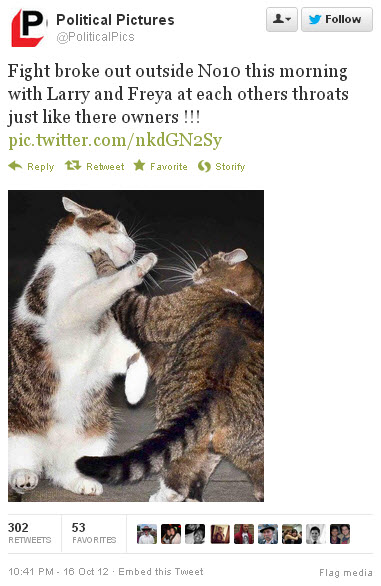 But the PM’s spokeswoman insisted the two tabbies were able to “co-exist”. She told the BBC that she would not “get into commenting on the adventures of our feline friends”.

Good on you PM. Golly we Australians can be a churlish lot. What the heck could be wrong with our Prime Minister announcing an honorary honour for one of the greats of world cricket? I heard Alan Jones carping away about it this morning and have seen some quite extraordinarily negative comments in the social media. They have a warped and narrow view of life. If an Order of Australia to Sachin Tendulkar helps improve relations between our country and India — and I’m sure it will — then it is an honour well bestowed. 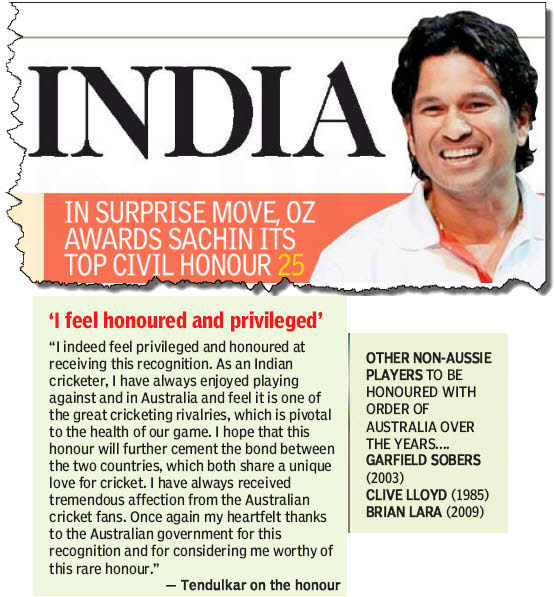 From this morning’s Times of India

….. to stop him “taking his temperature” again?