Did the Leveson enquiry miss out on some correspondence between David Cameron and Rebekah Brooks? Peeking into Brooks' pay packet. And Nine v Seven on coverage of Nine's debt woes.

Downing St didn’t give Leveson full story. It has been revealed a cache of emails containing correspondence between British Prime Minister David Cameron and former head of News International Rebekah Brooks were not handed over to the Leveson inquiry. The Independent reports sources thought the documents, which include exchanges between Brooks and former News employee and then advisor to Cameron Andy Coulson, contained some “embarrassing” material.

“The contents of the private emails are described by sources as containing “embarrassing” exchanges. They hold the potential to cast further light on the close personal relationship between the Prime Minister and two of the media mogul’s most senior lieutenants.

“However Mr Cameron, as part of legal briefings he received before and after his appearance before the inquiry, was said to have been advised that the Brooks-Coulson emails were outside Sir Brian Leveson’s remit and so he did not need to offer them up to form part of his report, expected to be published next month.”

Meanwhile, The Guardian reports Brooks received a payout somewhere close to A$11 million:

“The exact figure has never been disclosed by the Murdoch company — whose parent News Corporation holds its annual meeting on Tuesday — but one source said they believed it was between £6m and £8m.”

Murdoch once said that Brooks was his “top priority” when implicated in the News of the World phone-hacking scandal last year. She was close to Murdoch, but resigned in order to draw some of the heat away from the company. Such is the price for loyalty. — Nicholas McCallum

Video of the day. With Nine locked in crisis talks over its debt, a bright spark created this video from Nine and Seven’s coverage of the issue on TV last night. No prizes for guessing which network claimed Nine’s management were “upbeat” about the future … 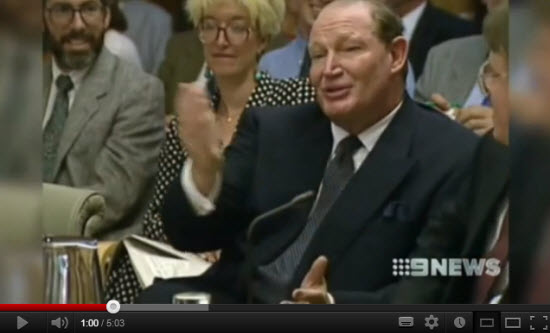 Front page of the day. Even when the presidential candidates come to town, the folk on Long Island, New York are more interested in how much they have to pay to catch a train … 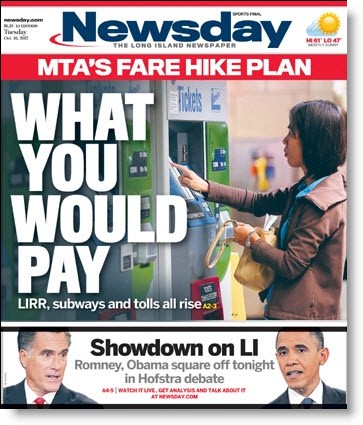 “The surprise resignation of 60 Minutes stalwart Liam Bartlett after six years on the road will again fuel speculation Nine is clearing a path for Today co-host Karl Stefanovic to join the flagship.” — The Daily Telegraph

“Depp will help run a publishing imprint with the same name as his production company, Infinitum Nihil, meaning “Nothing is forever”. Already on the list of books is The Unraveled Tales of Bob Dylan, which aims to set the record straight on the songwriter’s enigmatic life and career and will be based in part on interviews with Dylan by best-selling historian Douglas Brinkley.” — AP

You can understand Limited News not handing over such a cache (they’re a “lore unto themselves”) – but Cameron not doing it – in the interests of full and frank disclosure by the British Prime Minister?

And it looks like “Our Ms. Brooks” drew a bit more than some of that heat by resigning?

The question is, both domestically, and globally, when does the submission and public exposure of ‘private’ emails, become a decision of benefit in the public interest? One is amazed at the ‘naivety’ of those who, one would think, would have had a greater awareness of such exposure. Does this grow from their relative insularity from reality and engaging with us ordinary folk? Maybe it’s a kind of rebirth into arrogance?