Devine’s news story, republished on the Herald Sun and Australian websites, claims NSW students “are being taught it is wrong and ‘heterosexist’ to regard heteros-xuality as the norm for human relationships”. In her full-page opinion piece, Devine says the Proud Schools anti-homophobia program — which is being trialled in 12 NSW schools — “appears designed more for indoctrination and propaganda than to eliminate bullying”. She argues there is “little evidence” that homophobia is a big problem in schools. 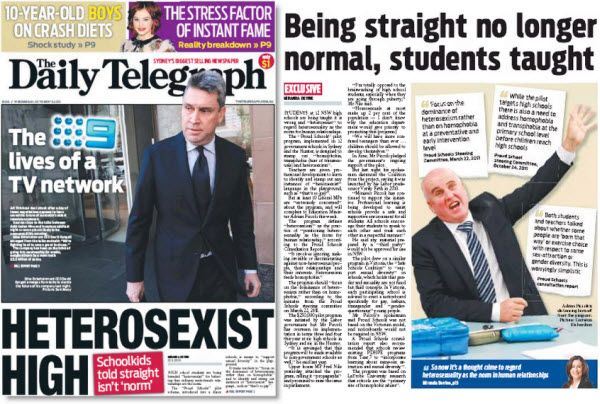 Senthorun Raj, who was a member of the Proud Schools steering committee, told Crikey: “Miranda Devine has chosen to write an entire article using evidence that shows exactly the opposite of what she argues. It’s quite concerning.”

In both articles, Devine refers to 2010 research from La Trobe University, based on a survey of 3000 school children, that was used to guide the Proud Schools program. Some of the report’s key findings, not mentioned by Devine, include: 61% of same-sex and questioning young people reported verbal abuse because of homophobia, 18% physical abuse and 26% other forms of abuse. The number of students reporting homophobic abuse had risen since 1998 and 2004. Eighty per cent of those who suffered homophobic bullying said it happened at school and over a third of respondents described their school as homophobic.

The La Trobe researchers also found an association between school anti-homophobia programs and students’ feelings about their sexuality: 87% of students who ranked their school as supportive felt good or great, compared to 75% at a school labelled homophobic by students.

Raj, a former policy officer at the NSW Gay and Lesbian Rights Lobby, said he’s disappointed by the Tele‘s coverage given its recent “Stop the Trolls” campaign to stop cyber-bullying and harassment: “If they are really going to call out the trolls why would they publish inflammatory stories that are misrepresenting information and saying bullying isn’t a problem?”

Anne Mitchell, an associate professor in health sciences at La Trobe, and one of the authors of the 2010 study, said: “I take exception to this whole idea about being normal. Heterosexuality is more common, but heterosexuality and homosexuality are both normal. This is not about trying to recruit people, it’s about trying to take the heat out of an issue so young people who are questioning their sexuality know they’re OK.”

NSW Labor frontbencher Penny Sharpe said: “The article misses the point of what Proud Schools is about. It’s an anti-homophobia program that says school students are worthy of respect and should be free to be who they are. It’s about being inclusive of all people.”

Devine says the idea heterosexist attitudes could lead to homophobia is “offensive”. The dictionary definition of heterosexism is: a prejudiced attitude or discriminatory practices against  homosexuals by heterosexuals.

Macquarie Street insiders told Crikey the Tele story appears to be driven by right-wing Liberals angry that Premier Barry O’Farrell handed the key education post to Adrian Piccoli, a moderate member of the National Party. According to Devine, “at least 10” Coalition MPs will complain to Piccoli this week about the Proud Schools program. There are 69 NSW Coalition MPs.

Piccoli came out strongly on ABC Local Radio this morning, saying he stood by the Proud Schools program. In a speech last month he praised his Labor predecessor Verity Firth for initiating the pilot program in Labor’s final term of government as “it is important for [the] cohesion of a harmonious, tolerant and inclusive school environment”.

Why should it be surprising that a bully attacks an anti-bullying program?

MAYBE MIRANDA CAN GET THE DICTIONARY DEFINITION CHANGED SO SHE DOESNT SEEM SUCH A SILLY T*T. THERE IS NO DOUBT THAT FOR ALL THE PROGRESS THAT WE MAKE IN THIS COUNTRY TO A MORE ENLIGHTENED POSITION THERE ARE ALWAYS MANY NOISY AND UGLY MINDED PEOPLE WHO FIGHT HARD TO DRAG US BACK INTO THE PRIMORDIAL SLIME.

Limited News 101 :- “Start at a point wanted and work backwards.”

But her article did deny that homosexuals are bullied. The article said “there is no evidence that homophobic bullying is a big problem”…even though there is.
I was absolutely disgusted when I read her article this morning.

Seems to me the argument is basically over the definition of “normal”.

One side is using “normal” in the context of “Homosexuality naturally occurs with a small percentage of any species”.

The other side is using it in the context of “Heterosexual relationships are the average”.

Someone buy them a dictionary so they can have a laugh about it and get back to stopping homophobic bullying trolls.