Now that’s a story. Have you heard about the fraduster impersonating an Australian Story producer, who has been booking camera crews and organising interviews with various people, claiming to be preparing stories for the top-rating ABC1 program? We hear staunch monarchist David Flint was one of those tricked by the imposter. And is the person from Byron Bay? If you’ve been approached by this David Copperfield of current affairs, tell us your story.

Reality audit … you be the judge. The overblown taste for reality entertainment has reached as far as those crazy cats at the Australian National Audit Office. Thanks to a tipster, Crikey is taking advantage of the public contribution section on selected official performance reviews conducted by the ANAO. Opening up the process is not entirely novel as public submissions to performance audits have always been accepted; this program has simply made it easier for the public to contribute during the field-work phase.

You just jump online, pick your favourite audit (not all are open to the public as it’s at the pilot stage) and unleash your views. Voila! Whether it’s the recovery of Centrelink debts by external agents or the administration of the GP Super Clinics scheme, your country apparently needs YOU to facilitate the smooth and efficient functioning of government.

Winds of change in SA Labor. A well-placed insider (who just might be from the Labor Right) sent us this report:

“On Saturday, South Australian Young Labor held its AGM. Let’s be clear — there has been a deal on positions between the Left and the Right for close to 20 years. Left takes President. Right takes Secretary, Treasurer and VP. Following on from the disaster at the Adelaide Uni Labor Club a few months ago where the Left lost control of the club for the first time, the Left on Saturday decided to go to a ballot for positions. It appears that having a Left member as premier has created some strange type of kamikaze reasoning within the Left of the party. After being outnumbered two to one on the day, the Right for the first time has taken all positions with the promising Tim Picton as President and Jonathan Schomburgk as Vice-President. There will be a number of head honchos at the Missos Union scratching their heads about how such a disaster could occur, particularly given the implications for recruitment.”

Pollies and Twitter part 327: It’s always commendable to see politicians prepared to speak honestly. WA Liberal senator Alan Eggleston is one such: a strong advocate of foreign investment, Eggleston is plainly infuriated by the xenophobic attacks of eastern state Nationals on foreign investment and has repeatedly commented via his (occasionally obscure) Twitter account about the subject. Yesterday, alas, he evidently felt he went too far. “Australian commercial history shows unequivocally that we have always depended on foreign investment because we lack capital …? no change” he tweeted yesterday. Then he followed it with “could ‘N’ stand for neanderthilic”, presumably a less-than-subtle dig at the Nats. Alas, he deleted it not long after, perhaps alarmed that I’d retweeted it with a herogram. Fearing that outcome, however, I captured it for posterity.

While we’re on Twitter, some politicians might be careful whom they, or their staff, follow. An account named @TheCompleatCnut (that’s the bowdlerized version; it used to be called worse), whose bio is “I might be a cnut, but I’m not a f-cking cnut.” (location “Australia, the Lucky Cnut”) has some interesting followers. After the recent focus on misogyny in federal politics, one wonders about the wisdom of Tony Abbott following an account named that, but there he is in the follower list. So too is NSW Labor MP Penny Sharpe, and Adam Bandt. Bandt is also on the thankfully tiny follower list of a disgusting, misogynist account intended as a parody of a well-known female press gallery journalist, as is Tony Burke. We know a lot of politicians more or less automatically follow back, but some judgment might occasionally be useful. — Bernard Keane

Reverse discrimination? A tipster was interested to see this job ad at the Australia Network (the ABC’s satellite TV channel which is beamed into the Asia-Pacific). The position is only open to Aboriginal and Torres Strait Islander applicants. Is this standard practice at the ABC, or is it a sign that the network is struggling to meet its ABC Reconciliation Action Plan? 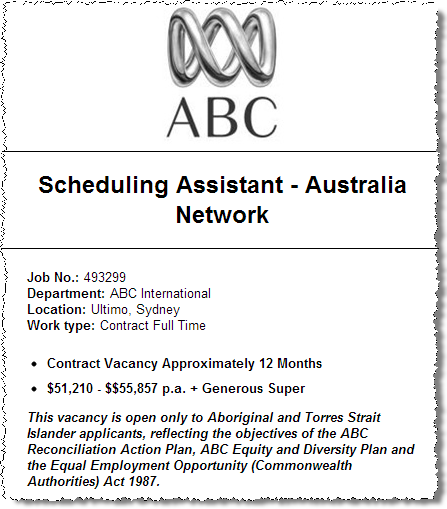 Tips and rumours: Imagine there’s no tax on religion