Figures from the federal government's Australian Institute of Health and Welfare out today provide Tony Abbott with evidence he can truthfully be negative about.

Something to be deservedly negative about. Figures from the federal government’s Australian Institute of Health and Welfare out today provide Tony Abbott with evidence he can truthfully be negative about. Despite the Labor boasts to end the hospital blame game and the spending of extra billions, median waiting times for elective surgery have increased from 34 to 36 days over the past four years. 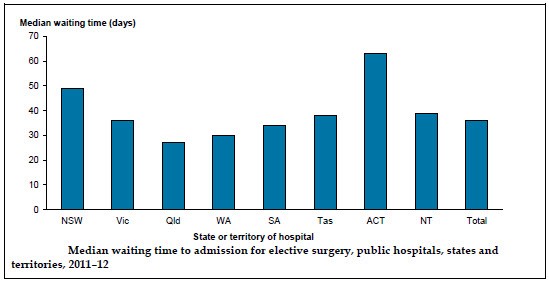 A sign for the ACT election? Perhaps that very high waiting time figure for Canberra provides a clue as to what will happen at this weekend’s ACT election. In the absence of opinion polls from the cash-straitened Canberra Times, predictions about the election outcome by pundits have been rare.

Undaunted I will offer the opinion that the Labor vote in this traditionally Labor town will drop considerably.

Close to the sewer? The rather tasteless jokes about the PM made the racing pages of the Murdoch tabloids this morning. This contribution by The Daily Telegraph’s Ray Thomas: 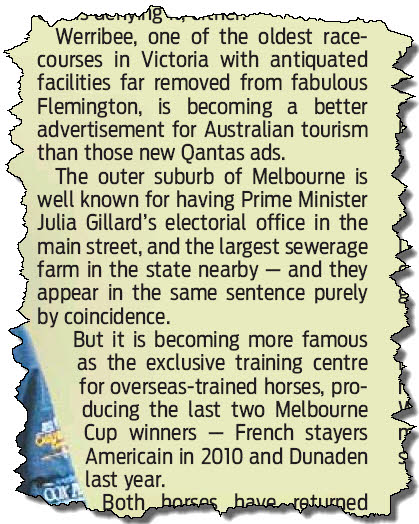 A sign of things to come? So the Gold Coast Council is facing bills of more than $20 million in ratepayer money to stop millionaires’ homes being washed into the ocean with a council report revealing Palm Beach beaches are so eroded a major storm could damage or even destroy the beachfront homes. The causes apparently are storms, combined with king tides in recent years, that have already swept away parts of some back yards. It makes you wonder what the cost will be like when a little global warming created rises in sea levels are added in to the mix. 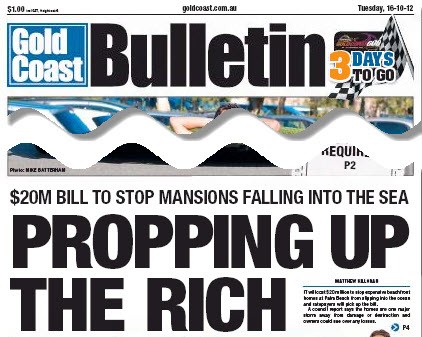 The report estimates $20 million will have to be spent on artificial reefs and other strategies to prevent more erosion and to rebuild the sand dunes.

Councillors fear the city could face legal threats from landholders taking action if it does nothing.

Property records show the residents have paid more than $174 million for luxury homes along the beachfront side of Jefferson Lane in the past 20 years.

Ignoring the initial evidence. My favourite pollster Essential Report yesterday may have reported no change in the two part preferred federal vote but Crikey readers are undeterred. They are continuing to predict that the next Newspoll will show a significant improvement for Labor. Make your prediction HERE about what The Australian’s next poll will show.

Is Richard Farmer for real? Hospital waiting lists for elective surgery, that is non-essential surgery, that a patient(consumer) chooses to undergo, blowing out from 34 to 36 days is a crisis? And fuel for the Abbott spleen?.

Non essential is also quite often unnecessary (nose job, boob job,buttock lift) which is a burden on our health system. This notwithstanding Australians enjoy the best health care and hospital system in the world. Only the truly ignorant or the monumentally self-obsessed (the nose job, boob job,buttock lifting narcissists on the non essential waiting lists)can say otherwise. Of course I’m aware of genuine need on the non-essential wait lists and these would be better served without the narcissists.

To argue from the position that the health system is not perfect, as nay saying whingers like Farmer and the former Health Minister Abbott are wont, is a beggaring argument and thus no argument at all.

So in response to Farmer’s pointed observation it needs to be asked: Why would anyone in their right mind go giving oxygen to narrow minded instrumentalist wreckers like Abbott and his mob with the only possible outcome being the evisceration of this fine system?
Then of course one is reminded, Farmer is a disaffected ALP insider, a Ruddite, a wrecker of the Machine, so to speak.

Put simply with friends like Farmer who needs the Abbott opposition?

It would be very surprising to see the ACT shift to the liberals in these days of austerity and Newman, even if all the hospitals in Canberra burnt down.

Vitriolux, you make much of nose jobs, boob jobs and buttock lifts as if these procedures are a major component of the elective surgery waiting lists in Australian public hospitals. Without any evidence it’s hard to judge but I would be surprised if such “unnecessary” cosmetic surgery features as an important item in the public hospital system.