Rupert tells whingers where to go ahead of AGM ... Fairfax delivery woes in Sydney ... which politician was Apple Queen in 1985?

Rupert’s warning to malcontents. News Corp’s AGM is in Los Angeles this week (Wednesday our time) and Rupert Murdoch has this advice for any shareholders with concerns about the company:

As one tweeting tipster noted: “He’s getting verbose in his old age, surely ‘my way or the highway’ would have said it.” Paul Barry (who filed this preview of the AGM) will be at the gig in LA, reporting for Crikey. We’ll be sure to pass on to Paul that people with “complaints” are supposed to up sticks and leave. Murdoch is certainly uninhibited on Twitter, passing on his commentary on the US presidential race and providing useful tips for the Romney camp, which appears to have won his preference:

Boffins face funding woes. An insider has passed this on:

“The federal government’s quest for surplus is blowing back into CSIRO capital expenditure, producing a backlog of research infrastructure spending that will take years to clear. It doesn’t even matter if the capital is provided by external entities. Apparently having depreciable assets that help you work more productively is a bad thing.”

Fairfax delivery fumble. A Sydney spy tells us that their Sydney Morning Herald and Australian Financial Review dropped on the doormat at 10.12am today; “latest I can remember”. Apparently newsagents only started receiving them between 6.30 and 7am. “That makes a mockery of the AFR’s campaign for its subscribers to bypass the newsagents and deal directly with Fairfax — and ‘save’ $28 a year in delivery fees,” our disgruntled newshound said.

Pollies’ picture gallery. Intrigued by Campbell Newman’s moustache (you’ll have to read Friday’s Tips to see why), Crikey is keen to see some of the photographs’ from politicians’ pasts. Hats off to federal Labor MP (and ex UN-lawyer) Melissa Parke, who submitted her own entry. You can see a tasteful modern headshot of the WA politician on her official page, but it was a very different story in 1985, when Parke took out the title of Apple Queen at the celebrated Donnybrook Apple Festival (she’s sitting in the middle there). As you can see she had some tough competition from Miss Apple Personality, in taffeta (hard left). 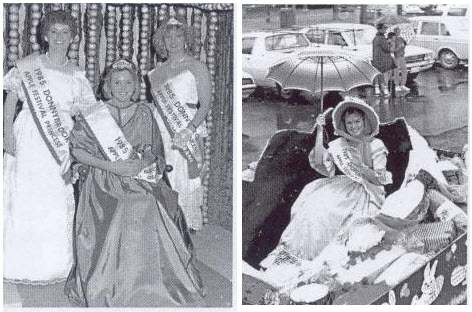 With the gender wars dominating the political agenda of late, Parke informed us that any possible gender bias in the competition has been addressed: “The competition, held every two years at Easter during the Donnybrook Apple Festival, is now gender neutral: Apple Queen is now ‘Apple Ambassador’,” Parke reassured Crikey.

Tips is now very curious to see more photographs of politicians, so send in your entries here (and you can even fire up the old snail mail if you have hard copies — our address is on the website). We know the evidence is out there! And we’re sure not all the pollies looked as good as Parke in the 1980s …

Rupert, “When you say FUX News – you said it all!”