Well there's one part of the retailing business that should not be complaining. Motor sales are doing well -- too bad so few of them are made in Australia.

Motoring along. Well there’s one part of the retailing business that should not be complaining. Motor vehicle sales are literally motoring along with the Australian Bureau of Statistics figures today showing September figures up on the previous year by 10.6% in trend terms and 14.4% on the seasonally adjusted measure. Just a pity, I suppose, that so few of the new cars are actually made in Australia.

The great Labor revival? Well there’s no doubt what the early respondents to our snippets “pick the next Newspoll” survey think. With over 400 replies a staggering — to me, at least — 82% expect to find that support for the Coalition has gone down. Nearly one in 12 actually expect the next poll to show Labor in the lead on voting intention. 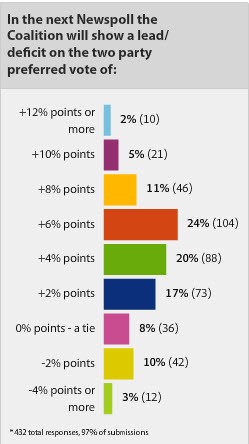 When it comes to the popularity of the political leaders there is an overwhelming belief that Prime Minister Julia Gillard’s standing will be shown to have improved considerably while Tony Abbott goes backwards.

It will be interesting to see if these trends continue. Your help in taking part in this Crikey snippets survey is appreciated.

A comment of the day. A reaction to Friday’s report on our snippets poll:

The high price of justice. Was staggered to read the estimate of Peter Slipper’s legal bill for defending himself against the charge of s-xual harassment. It’s $450,000 and rising!

Richard I am surprised you are surprised at the snippets poll. Crikey subscirbers are largely urban public sector/ academic types or Labor politicians glorying in the PMs watershed speech and assuming a similarly awakening electorate. They need to get around a bit. Lofty speeches dont usuaally translate into votes out Rooty Hill way. Just ask Goff Whitlam. And the Essentials Poll published today — in Crikey — points exactly that way – no vote change. Oh dear.