The biggest media stories of the day from around the globe.

Video of the day. If you’re afraid of heights (or flying) you might need someone to hold your hand as you watch this video of Austrian stuntman Felix Baumgartner, who leapt from 39km above the earth on Sunday, becoming the first person to break the sound barrier. Organisers reckon he reached a top speed of 1342km/h. “Well, I had a lot of pressure in my head. But I didn’t feel like was passing out,” Baumgartner said after landing safely. Most of us are probably familiar with that feeling. 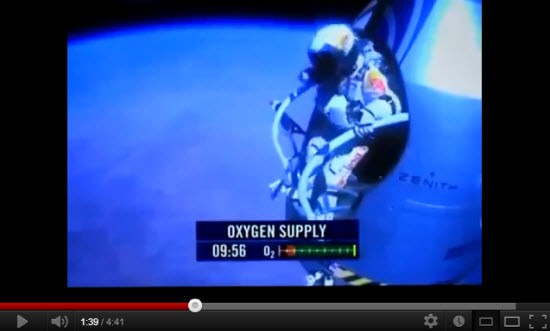 Front page of the day. Citizens of Portugal take to the streets to protest the rising taxes and austerity cuts, in anticipation of a very tight federal budget being announced today. Diario de Noticias has the story: 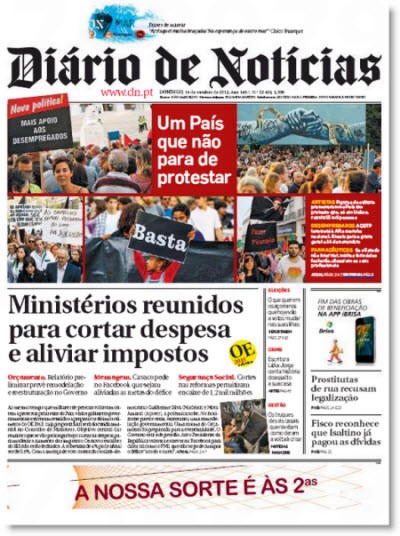 “Tomorrow could decide the financial future of Nine Entertainment, with a high-stakes council of war to be held among the key lenders after Nine boss David Gyngell last week threatened to put the company into imminent receivership.” — The Australian

“Being made to use your “real” name online does not hold most accountable. If that were the case hundreds of facebook/social media managers around the world would be out of work while people behaved politely online and with civility towards fellow humankind.” — Mumbrella

Daily Mail editorial: Why does the BBC get away with it?

“No, ask yourself instead why Lord Justice Leveson — who, of course, granted star witness status to Grant, Coogan and Mosley — is not reopening his media ethics and standards inquiry to deal with the BBC’s role in the ever-deepening child s-x abuse scandal.” — The Daily Mail

“Last Wednesday afternoon I called Michael Brutsch. He was at the office of the Texas financial services company where he works as a programmer and he was having a bad day. I had just told him, on Gchat, that I had uncovered his identity as the notorious internet troll Violentacrez (pronounced Violent-Acres).” — Gawker

“The idea of lumping four random writers together on a festival panel, each of whom have written very different books, might seem like a recipe for disaster and confusion. And yet it happens at almost every festival in the country, year in, year out, when those books also happen to have been the first novels to be squeezed out of the writers’ laptops, wrung from the sweat of their brows and so on.” — Meanjin