Which Premier should grow a beard? ... mass walk-out at Dutch opening to Melbourne Festival ... wheeling and dealing as deadline for Nine Network looms ...

He could be a New Man. Well, it’s Friday so some silliness is allowed here at Tips. Crikey is delighted with the enterprising blogger who contacted Queensland Premier Campbell Newman urging him to grow facial hair. “I am writing out of curiosity and in the hope that you may offer your perspective on the following question: Have you considered growing a beard?” our blogger asked. He went on to note that he wore a beard himself, and outlined some of the benefits. Here is the Premier’s response: 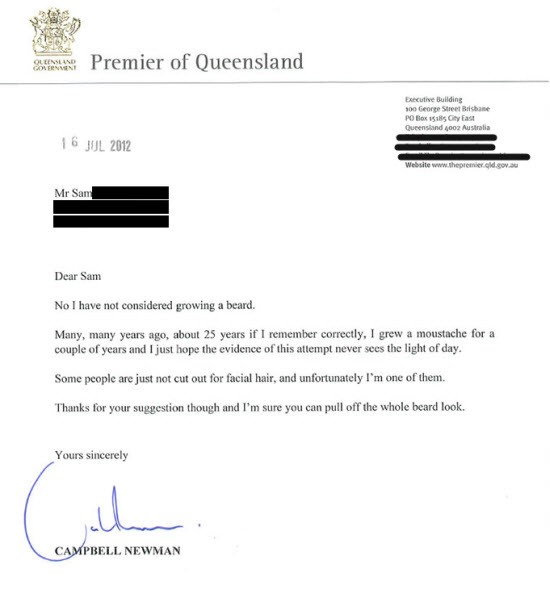 Crikey dashed off an urgent media request to the Premier’s office and we can confirm the letter is genuine. Naturally, Tips is burning with curiosity to see photographs of Newman’s hirsute days. Come to that, we’d love to see your photographs of any senior pollie’s more youthful days — extra points for perms, outrageous facial hair and dated fashion. Email us your photographs here (or you can snail mail them to the address on our website). Photographs of this Crikey reporter from the 1980s will not be accepted.

PM safe in Bali. We don’t know why Indonesia first claimed then retracted that there was a serious and credible threat to Australians visiting Bali for the 10th anniversary of the bombings. However, Tips hears the ADF has left nothing to chance with significant and highly skilled personnel in place for discreet security of their own — not just the usual PM’s entourage. We also hear the relationship between the ADF and Indonesia is better than ever … as long as everybody keeps their media messages straight.

Melbourne Festival opening bombs badly. Hardcore theatre-goers like Alison Croggon couldn’t recall ever seeing so many walkouts during a show. Dutch contemporary opera After Life hasn’t been reviewed yet, but take it from us, it stinks. And as the opening gala of the Melbourne Festival — one of the country’s leading arts events, funded with buckets from the Victorian government — that makes it an unmitigated disaster. Crikey spies confirm the high walkout rate at the Regent Theatre last night and the decidedly lukewarm applause for the imported cast and outgoing Melbourne Festival artistic director Brett Sheehy, who barely had time to take to the stage before the clapping died down. There will be plenty of arty types — and government figures — asking questions today.

Read all about it! Tips mused yesterday on the practice of editors giving newspapers away to boost sagging circulation offers (some McDonald’s customers are being given a free Daily Telegraph with their greasy feed). We’ve heard back from people getting a free Tele or The Canberra Times with their vegetables at Tom’s at Canberra’s Belconnen markets, while Qantas fliers still get The Weekend Australian and the Sun Herald at some domestic terminals. “Does anyone buy a newspaper any more?” one of our tipsters lamented.

Another tipster reckons this, of our tip that McDonald’s was giving away free papers:

“The Macca papers will be added to the audit figures, also the supermarkets run the free papers through the cash register and it gets noted as a sale but the price is then deducted from the total sale.”

We’re interested on whether there’s a minimum spend to get your complimentary paper. Anyone tried buying one apple (or one 30 cent Maccas cone) to see if you get a free paper (“value” at least $1)? Any would-be investigative reporters can cut their teeth on this task — let us know how you get on.

Nine deadline looms. The deadline for the fate of Nine Entertainment and its major asset, the Nine Network, is Tuesday, meaning a busy weekend for the various parties to the dispute and their advisers. An increasingly involved party not mentioned in dispatches is US entertainment giant Warner Brothers, the Nine Network’s biggest supplier of TV programs (think The Big Bang Theory, CSI, Two and A Half Men, 2Broke Girls) and others. It is said to have briefed Australian lawyers on the Nine Entertainment debt talks and what they could mean.

Could receivership at Nine end this deal if a receiver reckons the deal is “onerous”? Without Warner, Nine has huge holes in its schedules in the channels Gem and GO. Could a receiver try and claw back Nine’s share of the $90 million advance payment (or stop it if it has not yet been made), which the Australian Rugby League Commission demanded as an upfront payment on the new broadcast contract starting in 2013?

Tips and rumours: the Victorian Young Labor conference is on

I love tips and rumours, I really do. But when it comes to valuing chip wrappers….. ‘a free paper (“value” at least $1)’ ROTFLOLOLOLOL

Why wouldn’t he stick with the Brazillian? Every one thinks he is one anyway and he probably would not look all that different with hair.

Yes there were walkouts at the opening night of After Life. If Alison Croggon couldn’t recall more then she has been leading a very sheltered life. Not unusual at Festivals for patrons to leave things which are out of their comfort zone – particularly on opening nights which are notoriously unrepresentative of the. As for the accuracy of the rest of it – Brett Sheehy wasn’t on stage at all so how could we have just made it there before the applause died out.

Whether he’s cut out for facial hair or not Soup Newman may eventually resort to wearing a false beard as a decoy to escape the angry Qld crowds.