Who will edit The Sunday Telegraph? National newspapers get thinner and thinner as jobs ads migrate online; we look at the numbers. James Packer is back in The Australiam ...

Reading the Sunday Tele tea leaves. The most intriguing question in the Australian media right now is: who will replace Neil Breen as editor of The Sunday Telegraph, the nation’s top selling newspaper? Many News Limited watchers thought the decision would be announced during — or immediately after — Rupert Murdoch’s recent visit down under. Yet the great man came and went with none of us any the wiser. Breen himself says he has no idea about who’ll get the gig.

One name being floated as a likely contender is Daily Telegraph deputy editor Mick Carroll. The former Townsville Bulletin editor is little-known outside the company, but is very well-respected inside it. Former deputy editor Chris Dore is also seen as a strong contender, but there’s doubt about him filling the post given he was appointed editor of Perth’s Sunday Times in April. Another former Tele dep ed, Women’s Weekly editor Helen McCabe, says she’s happy at ACP Magazines and will be staying put for the foreseeable future.

Mia Freedman’s name has been mentioned in the press, but it’s hard to see how she could take up the job without stepping away from her popular Mamamia website. When Breen’s announcement is announced — and it won’t be long given he leaves for Channel Nine this month — another question will then take centre stage. Will, or won’t, the new Sunday Tele editor be working for Daily Telegraph head honcho Paul Whittaker. Breen certainly wasn’t. — Matthew Knott

Newspaper job ads have been falling for years because of the secular change among employers who get more response and cheaper buys from using online job ads sites. But for senior corporate and government roles, papers were still being used, especially the two national dailies and broadsheets like The Sydney Morning Herald and The Age. But now the federal government has moved most of its run-of-the-mill job ads to the online world, the number of job ads in the big newspapers will fall.

Already the ANZ job advertisement series shows the slide in newspaper ads (the series does not cover local and suburban papers, such as the weekly free papers owned by News Limited and other publishers). In 2007-08, just as the GFC was starting, newspapers (the big city dailies and weeklies) carried a total of 19,283 job ads a month. By 2o10-11 that had fallen to 9203 and by the end of the 2012 financial year, the number was down to 6612 (on an original and not seasonally-adjusted basis). That has risen to 7,056 in September, indicating a steadying (June was actually the lowest month recorded and was close to 70% lower than the peak in 2007-08). — Glenn Dyer (read the full story here)

Now Packer’s paying in The Oz. It’s not a total free ride for James Packer in The Australian. Following yesterday’s front-page advertorial featuring a svelte Packer announcing a partnership with the National Centre of Indigenous Excellence, Packer has a full-page ad on page five today. In case we forgot after yesterday’s glowing photo opp, Packer rammed home the message today, showing all the happy endings his new casino would bring to Sydney. 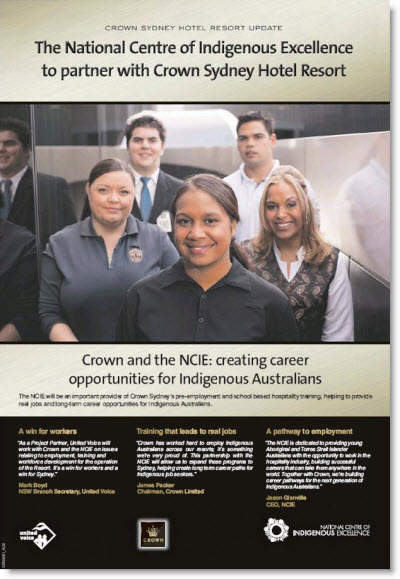 Video of the day. Bringing together the US presidential debate, those cheeky Taiwanese animators NMA and the most catchy pop songs of the last few years, this video has got it all. 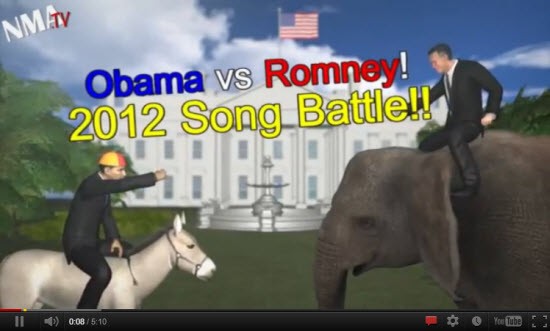 Front page of the day. Julia Gillard and Tony Abbott have occupied column space in today’s Fairfax papers paying tribute to the victims of the Bali bombings. The 10th anniversary of the terrorist attack seems to be more important to pollies here than in Indonesia, however; today’s Jakarta Post says Indonesian President Susilo Bambang Yudhoyono won’t be attending the memorial ceremony. 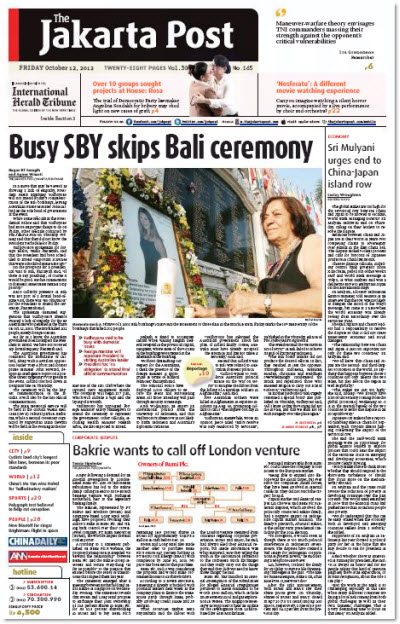 Another Obstacle down for News

“News Limited has triumphed in its battle for control of James Packer’s Consolidated Media Holdings, clearing the path for a shake-up of the Australian media landscape.” — The Australian

“Ms Broughton said that in such circumstances she did not believe the publication of photographs of Bayley would prejudice the administration of justice. She did, however, order any damaging material about Bayley be removed from the internet.” — The Age

“Secret-spilling site WikiLeaks has moved millions of documents behind a paywall, prompting blowback from elements of an underground ally, the hacking group Anonymous, including one well-known member to conclude that it ‘cannot support anymore what WikiLeaks has become’.” — Wired

Citizen journalism gets its own channel

“ITN Productions confirmed this week that it would launch a new citizen journalism channel, called Truthloader, later this year, as part of the initiative, while Euronews will launch a Knowledge channel.” — Journalism.co.uk

Dear Ms Broughton, just a polite heads up.
These days, not even a Deputy Chief Magistrate has the power to order things be removed from the Internet.

The Age got this wrong and published Bayley’s photo (I will charitably assume) in error. That was emphatically *not* what the magistrate said.