The HIVE Lab is an innovative experiment in connecting some of Australia's most interesting artists. And there's a history of artistic result.

What do you get when you put Bill Henson, Lally Katz, Eddie Perfect, Sophie Raymond, Cat Jones and Natasha Pincus in a room together — plus another dozen artists, directors, writers, filmmakers and producers? We’ll find out at the end of this weekend, at the completion of the HIVE Lab as part of the Melbourne Festival.

The HIVE Lab — an initiative of the Adelaide Film Festival, Screen Australia, South Australian Film Corporation, ABC TV and the Australia Council for the Arts — is a kind of mix-and-match artistic collaboration hothouse, bringing together 18 of Australia’s brightest talents across the worlds of film, theatre, art and literature. The aim is to “stimulate the development of new work for cinema and TV that is shaped and crafted by an artistic vision and process, ideally with new creative partnerships”. Each of the presenting bodies has pledged $200,000 towards the program.

You could say this is all an exercise in name-dropping and “super-group” style star collaboration. But that doesn’t seem to be the vibe coming from participants. Playwright Katz, for instance, told Crikey yesterday “there’s some really interesting people there” and that “it’s really fun”.

“Usually I write for theatre, so I guess it’s about getting people to try different mediums,” she said. “I’ve written some television episodes and a bit of stuff, but yeah not that much really.”

“We heard about everybody’s ideas today which were all really exciting, and really different. They were all people that I’ve certainly heard about, and so it’s exciting to be in a room with everyone.” 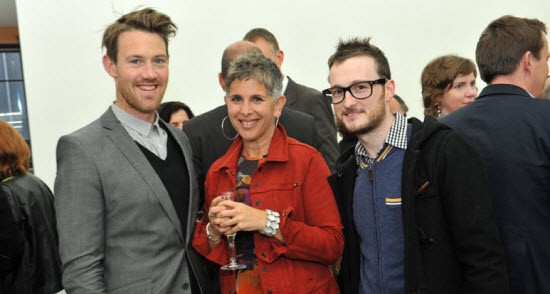 The idea for the HIVE Lab stems from the fertile imagination of ABC drama executive Katrina Sedgwick. Sedgwick proved herself a nimble and clever director during a decade at the helm of the Adelaide Film Festival, and her 2011 HIVE lab looks set to bear fruit with three projects premiering at the 2013 festival, including a feature-length rock musical to be directed by Michael Kantor entitled The Boy Castaways.

Another project emerging from the 2011 collaboration is an hour-long documentary, Tender, featuring artist Lynette Wallworth. She’s also involved in this year’s HIVE Lab. “It’s a sort of creative lab which invites some really fantastic artists working across many mediums, to imagine if they have an interest in working in the moving image with an outcome that could be broadcast on ABC TV and at the Adelaide Film Festival,” Wallworth said.

“I guess it’s the equivalent of the novel in the drawer. These are people who haven’t necessarily worked in film. It’s the possibility of a film idea that many of these people might have, who are highly talented and highly skilled and their skills could be transferred into film.

“The other aspect of it that’s invaluable is what’s very likely to emerge is incredibly interesting collaborations from putting those sort of people together. I think this is where the original idea came from from Katrina. Film enters into all these art forms, and then if you flip it back and ask what might filmmakers do if they took their skills and work in an interactive environment?”

Wallworth is particularly excited about the possibilities of longer-term, cross-art form collaboration that the lab offers: “There’s a long-term investment in really wonderful artists, giving them this opportunity to meet one another — because you don’t necessarily meet people working in a medium different to your own.”

The HIVE Labs continues as part of the Melbourne Festival until Sunday.