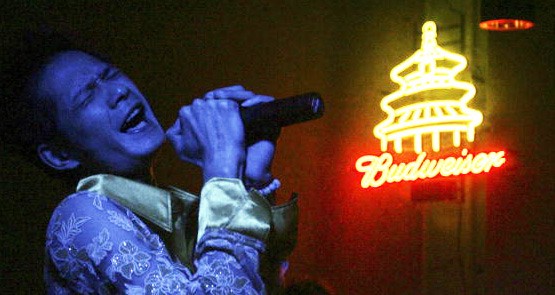 It’s Saturday night in Beijing and Destination is packed. The city’s biggest gay venue is a warren of rooms, with a loud central dance floor and an abundance of differently themed areas on either side. Some are noisy. Some are not. All are crowded to the point of overflowing onto the streets, where pockets of people more youthful than young huddle in the autumn chill.

It’s easy to assume China’s notorious authoritarian streak extends just as far into culture as it does into politics. After all, a government that vigorously and vigilantly scours the internet for dissidence is just as likely to crack down on the LGBT scene, right? Wrong, says Destination’s owner Edmund Yang.

“Westerners who have not been here probably think we are really underground, we are insecure to come out and be known as gay, but that’s not the case,” he told Crikey. “In Western countries sometimes the media exaggerates a bit … but if you don’t try to be a political activist, people won’t bother you.”

China’s monolithic government, in fact, has had the unexpected side effect of ensuring LGBT culture suffers none of the paralysing or polarising effects of a two-party system.

“In a way, it actually works better,” Yang said. “You don’t have a situation like you do in the US, where it’s an agenda for the election. It’s nothing like that here.”

Even government approval was relatively easy — at no point did Yang have to specify that Destination was a LGBT venue, but he takes pains to ensure it remains drug free: “To the authorities, it’s not really whether you’re a straight bar or a gay bar, it’s whether you’re clean or not.”

Homos-xuality was legalised in China in 1997. The path to acceptance hasn’t been entirely smooth — the first edition of the Shanghai Pride march was forced to be held privately, though in recent years it has taken place in public. The inaugural Mr Gay China contest was shut down by police in 2010, and there will be no Chinese participant in the contest’s international edition. Still, more and more universities are offering queer studies, and if the composition of Destination is anything to go by, healthy curiosity is in abundance.

Yang, a Canadian national who is a partner in the Beijing branch of PricewaterhouseCoopers, moved to the capital 18 years ago. He was originally meant to stay for six months, but ended up finding love — Yang and his boyfriend Wang Qiang, a former army doctor who grew up in inner Mongolia, have been together ever since.

The couple agrees China’s opening-up in recent decades has meant the younger generation is exposed to, and more accepting of, points of view that are different from their own. They feel safe being openly gay, and say that hate crime is rare.

“China is changing, and our culture is changing too, because of media, education and access to different culture via the internet and television,” Wang said.

In China, it’s common to see women of all ages holding hands while strolling down the street. It’s a little unusual to see men doing the same, but Wang says this was not always the case.

“People are more accepting and understanding, but more exposure to different cultures may be not good. In my hometown, men who are close to each other used to walk hand in hand,” he said. “But now it’s not very common because they’re afraid that people will think they’re gay, even if they are very close friends.”

“In Western countries sometimes the media exaggerates a bit … but if you don’t try to be a political activist, people won’t bother you.”

When Yang and Wang first got together, what is today the bustling bar area of Sanlitun contained more cafes than clubs. The gay scene at the time would shift from location to location, word of mouth sending interested people to the corner of one straight venue or another. Over the past 15 years, dedicated gay venues have opened to varying degrees of success, including Destination eight years ago.

Yang says it’s important for people to have a place to be who they really are, “where they can enjoy a night out somewhere where people don’t look at them differently”. Still, he finds that few eyebrows are raised at the difference between his day and night jobs.

“It’s an open secret. I don’t hide it — my colleagues know, and some of them have been here,” he said, recalling a recent basketball game between his Destination staff and his PwC workmates. Who won? “It was a tie,” he said, wry smile blossoming. “A bit unusual for basketball, but a good result for everyone.”

This brings us nicely to Yang’s plans for Destination. He intends to make it a hub for gay culture, and also a venue for people regardless of orientation.

In a refreshingly progressive move, the district government’s health arm approached Yang with the notion of setting up a HIV testing centre in Destination. Several hundred people have been tested in the five months since the centre opened; Yang says it removes the stress of going to a public hospital. The CIA World Factbook places China’s HIV/AIDS rate at 0.1% of the population.

Destination recently took over the rest of the building it inhabits. Yang has incorporated room for a dance studio, a reading room and public seminars, the most recent of which was on the topic of safe s-x. The bulk of the space is an art gallery for up-and-coming artists; Yang stresses that Destination does not take a cut, and that you don’t have to be gay to have your work shown.

“I want to have this as a platform for gay and straight culture to merge,” he said. “I’m hoping that those LGBT people who are not really into the club scene may also find it interesting to visit Destination during daytime, and for straight people hopefully some of them will realise that there is more to being gay than just clubbing and one-night stands.”

Yang wanders through his venue largely unnoticed, chatting quietly. He hasn’t considered marriage, and says he doesn’t think a petition would get anywhere; the impression is that while LGBT culture may be mostly unremarked upon, it is also hard to galvanise support for the cause.

At one point he emerges onto the main dance area, and even his trim physique is briefly unable to maneuver through the sheer mass of bodies. On the stage, leather-clad dancers are soon joined by regular punters; it’s hard to tell who is gay and who is not, and you suspect Yang isn’t particularly bothered either.

‘Friendly neighbours’ no more? China is slowly cutting off parts of Bhutan