Richard Farmer’s chunky bits: will the next Newspoll be up for Abbott?

Richard Farmer might think the ups and downs of voting intention and popularity largely are irrelevant but inside Parliament House they don't. He's hosting his own Crikey survey to guess the new results.

And the winner will be? It’s been a wonderful week for parliamentary freaks with some passionate views about who emerges as the winners and the losers. But what will the broader community think of all the charges of misogyny and hypocrisy?

I’m a wisdom of crowds man and by that measure Labor has perhaps gone a little forward — not much, but a little — being nearly a percentage point up as measured by the Crikey Federal Election Indicator that is based on the judgment of the betting markets. 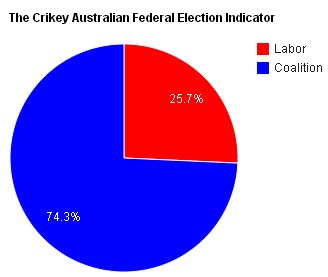 When it comes to what happens next in our Canberra sideshow, however, it is probably the opinion polls, and in particular Newspoll, that will have the greatest impact on the participants. I might think the ups and downs of voting intention and popularity largely are irrelevant but inside Parliament House they don’t.

Hence another of our little snippet surveys to tap into the good judgment of Crikey readers. 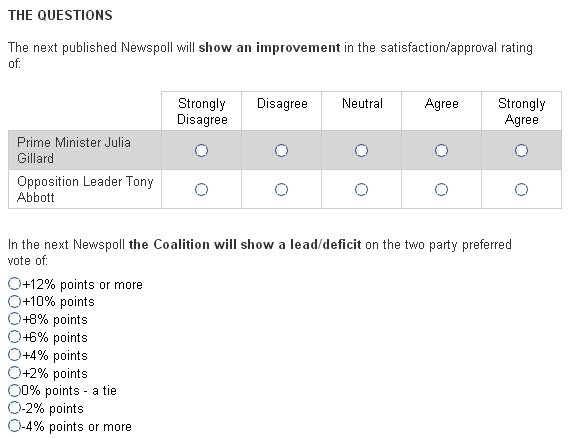 Unfortunately it is beyond the programming skills of this old fellow to make the form directly interactive but you will find The Crikey Survey: judging the winner of the parliamentary performances HERE.

It will be open until the next Newspoll is published and remember we are after what you think will happen, rather than what you would like to happen.

A little bit of history about minority governments. Maybe the turmoil in our federal parliament is just part of the great tradition of Westminster government. From a recent book review in The Guardian kindly forwarded to me by my eagle eyed friend Richard Hurford:

“In February 1974, after Heath has been ousted, Labour forms a minority government and we see Bob Mellish and his fellow whips offering sweeteners to the Liberals, the Scot Nats and the Northern Irish in order to stay in power. But, although Labour ends up with a slender majority of three after the October 1974 election, things get rougher and tougher. The party changes leader in mid-stream, the Tories cancel all pairing agreements after alleged cheating, fighting breaks out in the Commons, the sick and dying are wheeled in to vote. This, incredibly, is British democracy in action.”

The Reserve Bank gets it right. Weakness in the jobs market was given by the Reserve Bank as a major reason for lowering official interest rates and today’s employment figures from the Australian Bureau of Statistics show that it called things correctly. Australia’s seasonally adjusted unemployment rate increased 0.3 percentage points to 5.4% in September although the trend figure remained at 5.3%. 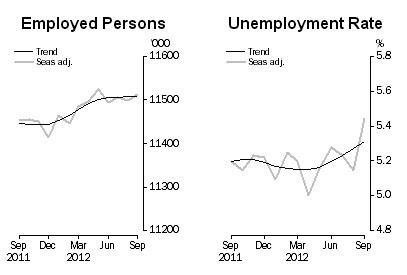 The race gets interesting again. A couple more opinion polls overnight showed Mitt Romney in front on the national vote and the market is certainly suggesting that the presidential race is getting close again.