Stokes backs News , cashes in on Cons. Kerry Stokes’ Seven Group Holdings will receive around half a billion dollars in cash from the Murdoch empire after announcing today it would support News Limited’s takeover bid for Consolidated Media. Seven’s decision followed the Australian Competition and Consumer Commission rejecting its application to make a bid for Consolidated […]

Stokes backs News , cashes in on Cons. Kerry Stokes’ Seven Group Holdings will receive around half a billion dollars in cash from the Murdoch empire after announcing today it would support News Limited’s takeover bid for Consolidated Media. Seven’s decision followed the Australian Competition and Consumer Commission rejecting its application to make a bid for Consolidated Media Holdings.

Seven Group owns 25% of Cons Media and James Packer’s private company has 55%. Packer has already announced his support for the News Ltd move, which will give it control of Fox Sports and half of Foxtel, restoring the situation that existed before the Super League war and settlement which saw the late Kerry Packer negotiate a 25% stake in Foxtel (carved out of News Ltd’s 50% stake) and half the News stake in Fox Sports.

Packer Watch: The Oz and slim James. They must be so desperate for ads in The Australian that they are running them for free. He’s a shadow of his former self but it’s hard to miss James Packer in today’s paper, beaming under the headline “James Packer rolls the dice for indigenous prosperity” on the front page … 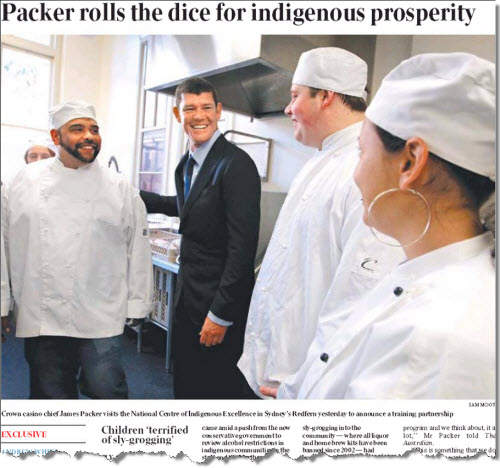 Packer was stopping in at Redfern, in what one indigenous elder labelled “one of the biggest things to happen in the area for 20 years”. (For those wondering, it’s almost exactly 20 years since Paul Keating made his famous address in the same suburb on December 10, 1992.) The photo opportunity was a chance to show the benefit of Packer’s planned casino at Barangaroo for the indigenous community in Sydney, as he launched a partnership with the National Centre of Indigenous Excellence. The partnership would mean training 2000 hospitality staff at the centre for his mega casino, but only if Premier Barry O’Farrell changes the state’s one casino legislation.

Packer said “we have got a high percentage of Aboriginal people working for us and we really prioritise that program and we think about, it a lot”. The advertorial is not just for Packer though — it includes some of his mates too:

“Mr Packer has been a big supporter of indigenous employment. Crown signed the Australian Employment Covenant in 2009, an initiative promoted by Mr [Andrew] Forrest, who with fellow billionaire Kerry Stokes is the biggest donor to its Generation One program.”

Packer told The Australian earlier this week that the Barangaroo development wouldn’t interfere with Star’s exclusive license until 2019, but “you can’t afford to build the best hotel in the world if you don’t have VIP gaming”. — Crikey intern Sally Whyte

Where’s the support for Penberthy’s speech? When will we see the fleet of News Ltd commentators sweep to the defence of one of their own, David Penberthy, who yesterday revealed in The Daily Telegraph he had been banned by Sydney radio station 2GB for being critical of Alan Jones (Penbo makes a weekly unpaid appearance on Steve Price’s show).

So after their stirring efforts in defending Alan Jones last week and this week, we no doubt will see a rugged defence of free speech for Penberthy as soon as possible from the likes of Janet Albrechtsen, Piers Akerman (after his performance on Q&A on Monday night), Miranda Devine and others, plus the likes of Gerard Henderson at the Fairfax broadsheets and Andrew Bolt on Network Ten and in the News Limited tabloids. All did great work in coming to the defence of Jones and bagged claims of “cyber-bullying” and descried the organised nature of the online opposition to Jones, 2GB and advertisers on his program.

Now we have 2GB and the likes of John Singleton, the major shareholder, Russell Tate, the chairman and others engaging in a spot of revenge bullying. But isn’t free speech a “to the barricades” issue for the likes of the News Ltd crowd? It all sounds a bit black kettle and noisy pot at Holt Street — one rule for Jones on free speech and another for everyone else.

And where is the boss of News Ltd, Kim Williams, who has been blasting the federal government over a claimed re-regulation of the media and threatening free speech? You’d think this attack on the freedom of Penberthy to write what he thinks of Jones would inspire Williams. And Rupert Murdoch for that matter. — Glenn Dyer

Something’s changed … The Global Mail launched its schmick new site — sans horizontal scrolling — today, to the relief of many readers. The press release puts the new format right up front, highlighting that “we’re live and vertical”.

Video of the day. After Mitt Romney said “I love Big Bird … But I’m not going to keep on spending money on things to borrow money from China to pay for it” in last week’s presidential debate, the Obama team returned fire with a video about Romney’s imagined “menace” of Big Bird. The Sesame Workshop have complained about the use of its furry star appearing in a political ad, but the Obama team haven’t removed it yet … 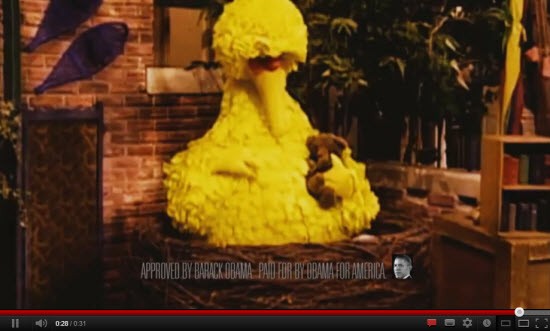 Front page of the day. Pakistan Today covers the hideous story of a 14-year-old Pakistani girl — Malala Yousufzai, a peace activist and blogger — being shot in the head by the Taliban on her way home from school. 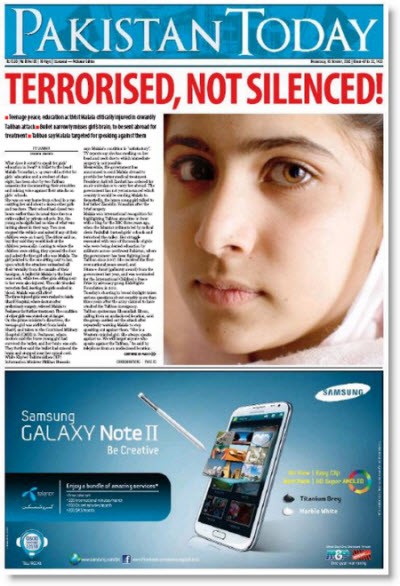 “News International’s high court bid to get a phone-hacking lawsuit brought by a former adviser to model Elle Macpherson struck out has been adjourned, after the publisher revealed it was having technical problems searching for vital documents needed for the case.” — The Guardian

“After more than a century of reporting on show business with a mix of quirky headlines and insider gossip, Variety is being acquired by the owner of the six-year-old Hollywood website Deadline.com for about $25 million.” — The Wall Street Journal

“During the Slate Reader Takeover, which will run for the next several weeks, you’ll be able to dole out assignments to your favorite Slate writers.” — Slate

Murdochs win back pay-TV via ConsMedia, Packer and Stokes clean up

And guess who wins.