Imran Khan and victims of the US drone war in Pakistan invited media and activists to join a convoy of protest through the outskirts of the war-ravaged nation. Justin Randle was among them. 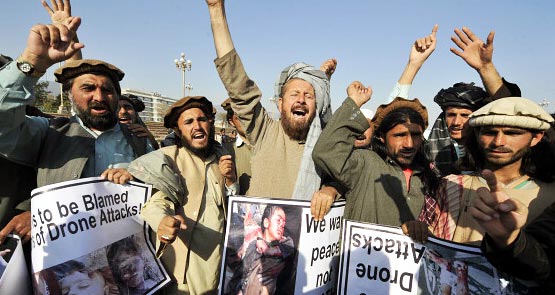 Last weekend in Pakistan, Imran Khan lead a convoy of vehicles toward Waziristan which was at times over 20 kilometres long. The peace march, which I flew from Australia to attend, mobilised thousands to focus world attention on this impenetrable region and the still officially secret US drone war that is being carried out there.

According to Clive Stafford Smith, director of the legal charity Reprieve, the journey to Waziristan was Imran’s idea. According to Imran, it was Clive’s. But while they may joke around together, there is no friendly disagreement on the purpose. It was to protest drone strikes that have decimated the region and continue to kill innocent people. The strikes are not only against international law; they are also counterproductive and fuelling extremism in Pakistan. Though derided by critics as politically expedient, the peace march was an historic step in the larger global effort to lift the veil of secrecy that shrouds this extrajudicial assassination program.

At around 9am on Saturday, October 6, on the Islamabad motorway, we began the 440km journey from Islamabad to Waziristan. A convoy of hundreds of cars with flags and pictures of drone victims jostled for position as though in some kind of crazy race. The atmosphere was electric.

The participants included both men and women supporters of Imran’s Pakistan Tehreek-e-Insaf (PTI) party, victims of drone attacks and local media. The international contingent included a number of foreign journalists, more than 30 activists from the US anti-war organisation Code Pink and those invited by Reprieve, including me.

The convoy wound its way through a rarely seen part of Pakistan, outside the cities where the majority of people live. Along the way more supporters joined from the towns of Rawalpindi, Attock and Mansehra. The convoy also travelled through Talagang, Rikhi, Mianwali, Kundian and Paharpur. At times people surrounded cars and threw rose petals upon them.

At every stop and through every built up area, the roads were lined with enthusiastic supporters. People on the ground seemed genuinely thankful that so many people had come so far to shine a light on policies that have terrorised their communities for over eight years.

A great deal of international and Pakistani coverage focused on the alleged security risks; one report went so far as to suggest no less than nine suicide bombers “may target Imran Khan’s rally”. It is perhaps not surprising that such “threats” emerged. The peace march mobilised large numbers of people to draw attention to an issue many would prefer remained secret. In this context, it is difficult to separate fact from politically convenient fiction.

Yes, the march was undoubtedly risky. But living in Pakistan is risky. And the march commenced, continued and concluded with no bombings or other attacks. For me, as with other dangerous regions of the world I have been in, I felt the most unsafe when simply driving in the car. Why only overtake two trucks at high speed with oncoming traffic, when you can overtake in a convoy of four?

The focus on the security of the march was understandable, but while people who participated made a choice, the people whose plight the march sought to highlight face a far greater daily security risk and have no choice in the matter.

Both during and prior to the march I had the opportunity to hear from victims of drone strikes themselves. Their voices are almost always absent from discussions on drones. On New Years Eve in 2009, just days after President Obama was inaugurated, a missile fired from a drone struck the home of Karim Khan in North Waziristan.

“After the drone strike my house and kill my son, my brother and a mason, the media say they killed another person Haji Omar [Amir of the Pakistan Taliban],” he tells me, “but after four months they announced they killed Haji Omar again. A man has one life or many lives?” Karim Khan’s brother was a teacher and his son was a student. He strenuously maintains that the victims were not involved in any terrorist activity or with any terrorist organisations.

There is a total lack of any rule of law or due process in relation to drone strikes. He says, “if there are criminals, or people who done something against the government or are harming anyone, we are a sovereign state … ask them to arrest people and bring them to the court”.

I ask him what life is like living with the constant presence of drones. “Our houses, Madrassas, mosques have all been destroyed by drone strikes. Twenty-four hours they’re circling, we hear it, see it, everything is affected, our trade, the school is empty,” he says.

“Our houses, Madrassas, mosques have all been destroyed by drone strikes. Twenty-four hours they’re circling, we hear it, see it, everything is affected”

I speak to other drone victims including family members of a strike on March 17, 2011. This strike hit a jirga: a tribal meeting of elders. An estimated 45 people were killed. They tell me how a team of 12 people took four hours to clean the drone site and identify body parts all while three drones continued to circle in the sky. Again the victims strenuously maintain the people killed were innocent.

I ask one of the Waziris how his relative’s wife and children survive financially without their husband and father. He says he and his brothers take out a portion of their pay and provide for them — they don’t want compensation; they work and can support themselves, “we just want the mass murder to stop”.

The victims and many Pakistanis blame the US for the drone strikes. After all it is President Obama who, according to The New York Times, personally authorises who will be executed every Tuesday while reviewing a “kill list”. But the question of Pakistani government complicity is also often raised; to what extent have Pakistan’s rulers been turning a blind eye to the extrajudicial killing of their citizens?

We eventually make it to the town of Dera Ismail Khan and stay at a farmhouse for the night. Prior to setting off in the morning Imran and the Code Pink delegates address the crowd. Code Pink apologises on behalf of their government for the drone program and the up to 3300 people it is estimated to have killed in Pakistan.

The convoy sets off for the remaining towns before Waziristan. At several points the convoy is delayed. Approaching late afternoon and knowing the army would block access to Waziristan, the march finally turned to make the long journey back to Islamabad.

Akbar v the drones: the Pakistani lawyer taking the US to court

Drones carry the war to the Taliban in their own heartlands. And while I cannot be privy to how targets are selected, there must be an intelligence system that identifies enemy targets which presumably has some degree of reliability, which doesn’t mean that it is always right or that collateral damage won’t be inflicted as well.

After all, Taliban do not conveniently set themselves up in military enclaves so that drones will only hit them, and not ‘civilians’ (whatever that means to people who are prepared to use children as suicide bombers).

Let us remind ourselves that the Taliban are enemies that must be fought. They are ruthless enemies who will not just attack absolutely anybody, using any means, but will use anybody in their control for any purpose they see fit, such as collateral damage propaganda.

And let me remind the writer of this article that one cannot always rely on what one is told by ‘civilian’ witnesses. These witness statements about the iniquities of drones can’t be checked. Are they Taliban sympathizers who agree that girls shouldn’t get an education and deserve to be flogged or shot if they try to oppose Taliban will. Were they relative or friends of Taliban? What would happen to said witnesses if they confirmed that Taliban were using villagers as human shields and Taliban found out?

I just cannot get over what uncritical ideological sucks some reporters can be? That doesn’t mean drones do not have negative effects. But that is how it is in wars, I would have thought. Nasty things, wars…..

Christopher :
So simple! The US says that ‘they’ are Taliban, ‘we’ are at war with them, note: they are not at war with the US and its allies, or at least only to the extent that the USers are invaders in their country/s with the avowed intention of destroying their way of life, imposing the far superior lifestyle of the ‘West’, a lifestyle sustainable only on the basis that the resources of all those not powerful enough to prevent the theft of their resources, and the slaughtering their people.

No: the USsers are making war, murdering innocents, in an attempt to seize control of the worlds diminishing oil/energy supplies. It is they who are the invaders, murders, plunders, terrorists. That they depict the Taliban and anyone else who opposes them as ‘terrorists’ and a threat to the world is for the consumption of those too bloody lazy, too bloody careless of the rights and lives of others to care.

The then Secretary of State Madeleine Albright’s answer on U.S 60 Minutes (5/12/96) on to Lesley Stall sanctions against Iraq: ‘We have heard that a half million children have died. I mean, that’s more children than died in Hiroshima. And, you know, is the price worth it?’
Secretary of State Madeleine Albright: ‘I think this is a very hard choice, but the price–we think the price is worth it.’ illustrates how completely unhinged people in these positions can become.

On the basis of that answer alone, why was she not taken out and hanged?

These people that the USers abuse are too damned civilised for their own good! It is past time that they realised that merely killing a few ‘soldiers’ was a waste of time. Rather they ought identify politicians supporting the invasions, the officers and those soldiers involved in atrocities and target their homes, the schools which their children attend and the hospitals that treat the war maimed. Yes, I mean right there in the states.

Let them know that while they can certainly main and kill the innocents in the countries that they invade they cannot protect their own, at home. It is time that the USers were made the understand what ‘terror’ means. Understand what it is to dig the broken remains of their kids from the rubble.

They are to thick to understand anything less.