What's happened to whizz-bang ABC roll-out? ... The 'Tiser gives away the tricks of the trade ... people will pay to listen to Abbott on rugby after all ...

Aunty hits a snag? A tipster claims the rollout of the ABC’s new whizz-bang online “content management system” is struggling.

“Millions of dollars spent and now project has ground to a halt with only ABC News Online using the new system. Word is this core media might never be rolled out across the organisation. Wasted money and bad project management.”

If you can tell us more about the roll-out of the system, drop Crikey a line.

Here’s how to manipulate us for your own commercial success! Companies in South Australian can learn how to get their story in the newspaper — from the newspaper itself. Paul Starick, Head of News at The Advertiser, is speaking at a free working lunch for members of “Advantage SA” next week. We’re not quite sure what Advantage SA is, as their website contains the usual PR guff. But if Starick gives away The ‘Tiser’s secrets to everyone at the lunch, who will get ahead? Anyone who goes along can update us on the tricks of the trade here. 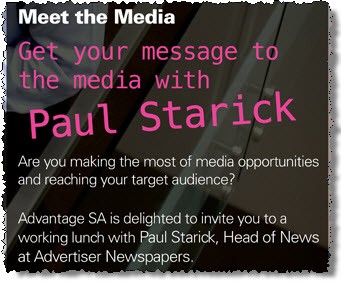 Double dipping. Which councillor has been accused of double dipping into council funds? Apparently he represents the council on two external bodies, and his critics reckon he “claims expenses through them and through the Council”. Is the ombudsman investigating?

This one could be a bye. A sporting enthusiast reckons a Melbourne Rebels lunch, at which Tony Abbott is to be the guest speaker, is at risk of being cancelled because people don’t want to listen to him. The SuperRugby team’s event on October 19 doesn’t come cheap, at $175 for non-members to hear the speech by the “rugby union enthusiast”. All this while you can listen to Abbott in question time for free!

But it seems our anti-Abbott tipster has got this wrong. A spokesman for the Rebels told us: “Certainly not cancelled, full steam ahead. Crowd numbers down a little but that is pretty standard for this time of year with this event.”

Empty chairs in the press gallery. Tips couldn’t help but notice that the parliamentary press gallery was all but empty last night, as Peter Slipper made his emotional resignation speech changing the dynamics of federal politics. Yawn. Nothing but rows of empty pale green seats just after 7pm, with perhaps Sam Maiden from The Australian (and surely those workhorses at AAP in the far right corner?). So, were all these reporters having dinner down at Portia’s, or glued to their TVs in their offices? Fill us in with your insider gossip on who was doing what here (and yes, you can stay anonymous).