The Peter Slipper saga will be forgotten. What people will remember is a Prime Minister standing up for women and demanding sexism stop, writes commentator Susan Mitchell. 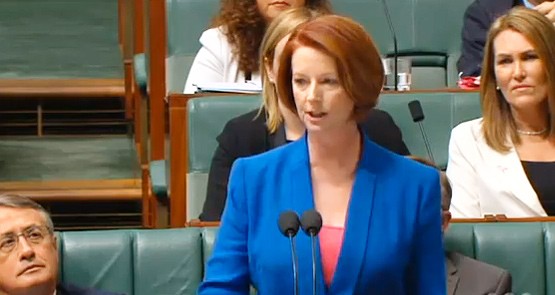 It is difficult for many men to ever truly understand what it is like to be a woman who is forced to put up with sexist and misogynist remarks. Some of them are devious and sly. Some of them are openly hostile and aggressive. Rarely in the workplace do women ever call out men on these remarks.

Why is this? Because men usually hold the positions of power in most workplaces. Because to call out a man on sexist remarks is to be labelled a man-hating feminist or a troublemaker or not a “team player”. Those women who are brave enough to do this are sometimes punished in some way. And for this reason most women try to ignore the insults and just get on with their work.

My mother always told me “to rise above it” and not reduce yourself to the level of the abuser. Thankfully my father taught me to never be put down and to speak and write as an equal. It has not always been to my advantage to do so. But unless you do, nothing will change.

For the first time in our political history, we have a woman holding the power of the highest office in the nation. There are many men, particularly Tony Abbott, who have sought to rip that power away from her as soon as possible. But she has withstood them. Despite all the “slings and arrows” they have flung at her, she has tried valiantly to rise above it.

Yesterday in Parliament she could take it no more. And she let Abbott  have it. She had reached her tipping point and refused to be silent in the face of his hypocrisy.

“Whether Abbott changes his manner, his language and his beliefs or just pretends to in order to become the next prime minister is up to him and the women and men of Australia to judge.”

She challenged him to confirm whether he still believed that “men by their physiology and temperament were more suited to the exercise of power”.

She stated that she was not only personally offended but was offended on behalf of the women of Australia when he stated that “abortion is the easy way out”.

She pointed out that no man would ever have been challenged in the manner she was, “to make an honest woman of herself”.

She underlined the double standard of Abbott standing in front of posters saying “ditch the witch” and naming her as “Bob Brown’s bitch”. Such hypocrisy, she said, could no longer be tolerated.

Abbott sat there unsure of how to shape his expression, knowing his usual stony, killer stare would not work. Looking decidedly uncomfortable at being forced for the first time to endure this personal attack on his own sexism, he finally looked at his watch, to check how much longer he had to endure. She even called him out on this, adding: “Apparently a woman has spoken too long. I have had him yell at me to shut up in the past.”

While most male commentators admitted that it was a “feisty” performance, they did not go on to discuss the hypocrisy and double standards of the Leader of the Opposition. Nor do they understand how important such a speech is to the women of Australia. This was not just one woman’s exasperated outburst on her own behalf. This was the Prime Minister of Australia saying to every Australian woman: we don’t have to take this any more.

When Peter Hartcher claimed in his column in The Sydney Morning Herald that Gillard had let down the women of Australia, he could not have got it more wrong. The hundreds of responses to his claim demonstrated that for the first time in our lives, a prime minister was speaking on our behalf. The fact he and most of the male political commentators have totally missed the point of her speech only serves to prove what she is saying is true.

Will her speech just drift off into the ether with all the other political hot air?

Why has her speech spread so quickly around the world? Why are women in many different nations reading it and commenting on how lucky Australian women are to have a prime minister who has the guts and passion to attack the kind of sexism that some of us face on a daily basis?

Few might remember the details of the Slipper saga but her words will ring in our minds and our hearts forever.

The Prime Minister’s message is clear. When confronted by relentless sexist and misogynist language and behaviour, women should: confront it openly, call it for what it is and never consider it to be acceptable behaviour under any circumstances.

Whether Abbott changes his manner, his language and his beliefs or just pretends to in order to become the next prime minister is up to him — and the women and men of Australia to judge.

Whatever happens, Gillard’s words in that Parliament will never be erased. They are proof that words can change the world.

*Susan Mitchell is a commentator and author of the book Tony Abbott: A Man’s Man

The words may be remembered and the clip played often etc, but people will recall that 70 Labor, Green and Independant MP’s voted to support the ‘word’ and ‘texts’ of Slipper by retaining him in the Speakers role, albeit for a few hours.

Look at Rudd’s body language during her speech, he never looked up once, was on the iPad and reading. That was interesting

Its not just male commentators that have missed the mark. Emma Alberici, Latika Bourke, Sabra Lane and Annabel Crabb are all doing the same. I cant believe it.

What people will remember is Julia Gillard and the entire Labor Party voting for a misogynist and s3xist Peter Slipper.

It’s now on the public record, every single Labor MP including Bandt, Windsor and Oakeshotte voted in support of Peter Slipper and his comments.

Even Peter Slipper himself thought it was untenable for him to stay… but not this Prime Minister, so desperate she was to hold onto him.

Whatever yesterday was, today surely is a new low in the MSM, a new low tide mark for the slide into the toilet bowl beckoning aussie journalism.

Anyone who actually watched and comprehended the speech understands precisely why this PM absolutely deserves the support of every intelligent Australian.

I suggest you read the speech then you can come back and apologize for being an ignoramus.