Julia Winterflood attended the celebration for an iconic song about Aboriginal dispossession at Uluru -- and found a sea of white people taking photos with their iPhones. 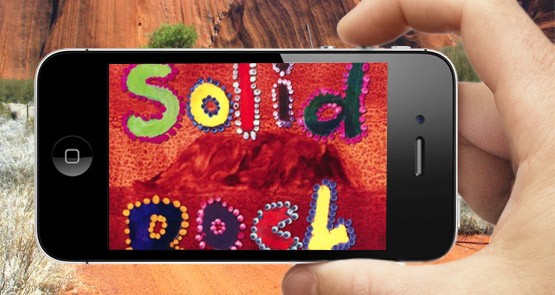 Shane Howard, frontman of the band Goanna, was walking around Uluru 30 years ago. A big mob from Amata, a community in the north-west corner of South Australia, had set up a tent and were performing imma, a community ceremony. Shane wandered over and was invited to sit down. The experience moved him and he wrote a song about it, Solid Rock.

Solid Rock became an iconic Australian protest song and recently at Mutitjulu, on the eastern edge of Uluru, Howard (along with John Butler and others) celebrated the song’s 30th anniversary by recreating it. The “Other Side of The Rock” concert was free and despite it being held in a community usually closed to unrelated outsiders, everyone was welcome.

Excited, I rang a friend who was going to meet up, and we joked about how it was gonna be dead easy to spot each other as we’d be in the minority. Whitefellas in the minority? I couldn’t have been more wrong.

When Mum and I wandered in there was a sea of white faces and hundreds of cameras and iPhones in the air. It looked like almost every other festival I’ve been to. White girls in singlets with severe sunburn, white girls in tiny frayed denim shorts. I couldn’t spot my friend. I couldn’t see any Aboriginal people anywhere, except for a bunch of kids playing in the portaloo truck. We were standing on red dirt in Mutitjulu, but where were the locals, where were the Anangu?

The sea of white faces made me feel sick and strange.  This was a concert to celebrate 30 years of an iconic song about Aboriginal dispossession, yet the only Aboriginal people I could see without scouring the peripheries were the old painted-up women performing a ceremonial dance in the centre of the white sea. A dance so sacred the MC wasn’t able to give any explanation of its meaning because of the whitefellas present. The cameras snapped away, including mine.

I figured everyone who was staying at Yulara, the tourist resort at Uluru, was there. Of course every tourist would’ve jumped at the chance to catch a free concert at a community they would never normally be allowed to see. What a shock they would’ve got, travelling from one side of The Rock to the other.

It was a white man’s gig. It was a celebration of a song written by a white man, and even though Howard shared the stage with Aboriginal music luminaries Archie Roach and Bart Willoughby, there was no Mutitjulu representation whatsoever. Do people at Mutitjulu listen to John Butler? Nup.

John Butler’s song towards the end of the night was the most cringeworthy moment I think I’ve ever felt in my life. I’d already shed a few sad tears to Dan Sultan’s achingly beautiful black-timbered voice while I was standing on the boundary where a small group of Anangu had gathered, but Butler made me feel toxic. The irony broke my heart and scratched and clawed at my guts.

He performed Kimberley, a cowboy tale in which the Kimberleys are anthropomorphised into a girl who was a “special, rare and wild soul / Nearly every man who met her, their hearts she always stole”. Even though it was a song about a sacred land grab, its trite narrative was entirely untranslatable. I had to look up to the stars to stop my tears as Butler got the white sea to sing the chorus with him:

I asked an old man in a wheelchair where everyone was. He shook his head and gestured towards the crowd. “We just bin keepin’ away.” Every now and then Howard would say “Nyuntu palya?” which means “are you OK?” in Pitjantjatjara. There were some barely audible replies.

The only musically-redeeming moment for me was the little choir of kids from Pukutja (Ernabella), who sang the chorus to Solid Rock in Pitjantjatjara. Their high-pitched voices pierced the pomp and polish.

Why wasn’t there more of this? Why wasn’t Iwantja Band from Indulkana in the APY Lands, who are enormously popular in Mutitjulu, on the bill? Why were the Anangu sticking to the shadows when the concert was meant for them?

This afternoon I called a friend who lives at Mutitjulu. She agreed there was something sad and strange about tourists pushing the Anangu out:

“The Anangu don’t rush the stage like that, they have protocols for these things. They always stay a bit back and leave a space up front for the kids to dance … So when all the whitefellas got up to dance and filled the entire area, that was it. It was an invasion.”

Afterwards, we walked in the opposite direction to the crowd. We hadn’t parked with everyone else but driven through Mutitjulu and stopped at a different gate where there were fewer cars. The tourists didn’t see what I saw on that drive. I’ve been to communities and town camps before but that doesn’t mean the dilapidation and detritus is any less confronting.

It was made even more so having just driven through pristine Uluru Kata Tjuta National Park and past Yulara, immaculate tourist town. As we walked away from the site, dozens of Aboriginal people walked towards it; women pushing prams, women with babies on their hips, men in wheelchairs, kids and dogs. Once the concert was over and the whitefellas were on their way out, the Anangu came streaming in.

*Julia Winterflood grew up in Alice Springs and recently returned there. She works in Aboriginal education. This post was first published at her blog and has been edited for length.

Uluru is not yours to climb

Pretty sure it’s the 30th anniversary…

Pretty sure Iwantja was on the bill, but failed to show up to play.

Have spent lots of time in lots of Aboriginal communities and have never once heard Goanna or John Butler being played. Maybe there weren’t many locals at the concert because they weren’t interested? Perhaps Julia W should be more worried that it’s generally a racist who’s bothered by the racial construct of a crowd. Horrid shame she works in education…

Please remove this offensive story and print the writers apology posted today on her blog instead. Unfortunately, she got the story very wrong and the Mutitjulu community and ‘Other Side of the Rock’ concert production team are very offended. This event was run by the community and an invitation was sent, by them, out to all whitefellas to come to Mutitjulu and start building bridges with music .. and they did! What a success.. well done Mutitjulu mob, keep up the great work! Crikey should be more careful or may be accused of supporting bad journalism. ( PS:The sno cones were not ironic, but they did keep all our kids cool on a very hot day and help raise funds for the community!)

I wrote ‘Solid Rock: Solid white out’ the moment I got back to Alice early Sunday afternoon after the concert the night before. I was still reeling with sadness and heartache and when I’m upset I write, so that’s what I did.

I only asked Anangu “Where is everybody?”

I didn’t ask “Are you having a good time?”

I believe the worst thing you can do to a person is make them feel like a stranger in their own land. I thought the massive influx of whitefellas would have made Anangu feel like strangers in their own community. That was an assumption I made, and it was wrong to make that assumption.

I wrote my piece from the perspective of a whitefella who was deeply distressed by the sea of white faces when she expected to be in the minorty. But I failed to consider that perhaps Anangu were not distressed at all.

For this assumption I am deeply, deeply sorry. I offer a bottom-of-my-heart-and-soul apology to Shane Howard and the entire production crew, but most of all to the community of Mutitjulu.