Julia Gillard and Tony Abbott were at war in Parliament yesterday, and led media mentions for the week after a fiery few days in parliament, writes Sentia Media's John Chalmers.

Prime Minister Julia Gillard and Opposition Leader Tony Abbott were neck-and-neck in this week’s media coverage. And at each other’s throats yesterday as personal denigration ruled the day, with the PM angrily accusing her foe of being misogynist in a lowest common denominator slanging match reflective of the widespread vitriol in recent public debate.

Indeed, Abbott’s perception problem continues despite his wife’s recent support — a small lift in the polls still left him level with the lowest popularity levels for an opposition leader in 40 years, a point not lost on independent MP Tony Windsor who was quick to preference Malcolm Turnbull.

But Labor’s attack on Abbott’s “problem with women” — served up by Attorney General Nicola Roxon and the “handbag hit-squad” — landed back in its lap when the Speaker of the House Peter Slipper resigned following the outing of s-xist texts he himself described as inexcusable. It was a loss of both principle and power for Gillard, first losing her credibility as a role model for women by supporting Slipper in order to preserve her numbers on the floor, and then losing Slipper too.

Her cred went south as Slipper’s coverage went north, his resignation following a nudge from independents Windsor and Rob Oakeshott, amid pressure from the likes of Deputy Opposition Leader Julie Bishop who, accurately, claimed Slipper’s position was untenable. It’s a shame, for despite the inevitable brouhaha he was actually a very good speaker. 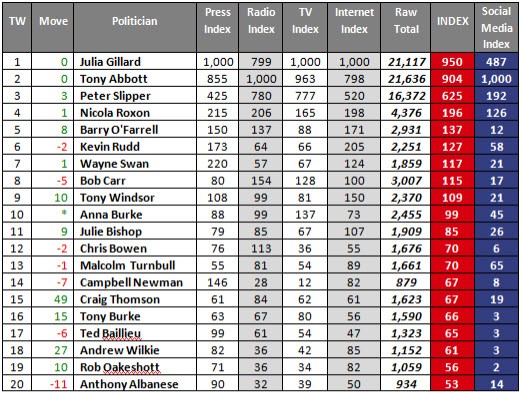 Roxon came under fire for briefing lawyers on the Slipper case, while playing the man not the ball with Abbott may be working in Turnbull’s favour.

Kate Ellis ranked high on Twitter following a spin on the ABC’s Q&A. And for the first time in forever, K-Rudd is nowhere to be seen.

Alan Jones’ prolific letter writing looks outmoded against new media activism which is as swift as it is lethal.