With as much money as Australia's Rich List members have, and the vast stretches of beautiful coastline to explore, is it any wonder they love to spend it on boats? 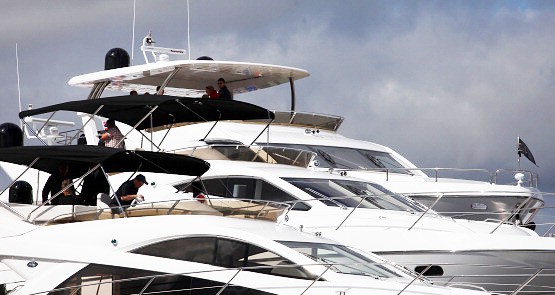 Is it the fact we are an island nation? Is it the fact that our ancestors arrived here as boat people? Is it some sort of deep, spiritual connection to the sea?

Whatever the reason, Australia’s Rich List members love boats: big, expensive, floating-palace-of-the-high-seas boats that cost a large fortune to own and a smaller fortune to run. But owning a big motor yacht or super-yacht isn’t always smooth sailing (don’t worry, I’ve got a million of them), as Noosa-based millionaire Paul McDonald found out this week.

McDonald struck trouble off the coast of Canada as he was attempting take his super-yacht Fortrus through the Northwest Passage, part of a circumnavigation of North America. While the Northwest Passage, the sea route through the Arctic Ocean that skirts the top of North America, is famous for claiming the lives of early Arctic explorer such as Sir James Franklin, McDonald’s expedition wasn’t exactly a rugged trip into the wild.

The 34-metre Fortrus has seven staterooms, a Jacuzzi and a crew including a private chef. In this sort of environment, it’s not hard to imagine McDonald and his passengers would enjoy a party or 29 as they cruised around North America. But it’s these parties that landed McDonald in not water.

McDonald has been charged with one count of providing liquor to a minor and one count of being in unauthorised possession of liquor by authorities in Cambridge Bay, a small town located deep in Nunuvat Territory in Canada. The locals have strict rules about the possession of alcohol and what has been reported to be a “wild” party on board Fortrus did not go unnoticed.

McDonald is a notoriously private entrepreneur whose empire spans building products, resource and agribusiness. He rose to prominence last year when he sold a quarry in the Queensland town of Gympie to Boral for more than $80 million.

So far, his statements on the incident have been limited to a release through his lawyers saying that McDonald “regrets he was not familiar with the local laws or the restriction on fireworks or liquor at the time of the alleged incident”. McDonald’s lawyers denied reports that a cheque used to pay $10,000 in fines had bounced and they say the fines will be paid in full by November 15.

The fact that McDonald remains on a boat thousands of kilometres from Australia means he doesn’t need to answer the questions from pesky journalists. And, of course, that’s one of the key attractions of a super-yacht.

For the super-rich, being able to get away from the pressures of work — and least some of the interruptions of modern communications — in a luxurious environment is one of the big attractions of owning a super-yacht. The privacy offered — at least when you’re on the open sea and away from paparazzi and pesky locals in port — must also be extremely attractive.

But at least part of the allure of the big yacht must be its power as a status symbol. Nothing says you’ve made it in quite the same way.

Firstly, there’s upfront cost. To play in the real big leagues of the super-yacht world, your floating palace needs to be at least 70 metres long — in a list of the top 100 super-yachts produced earlier this year by Superyachts.com, the smallest boat was 76 metres long, but increasingly the biggest yachts are over 100 metres long.

The biggest — and most expensive — yacht ever built was made for Russian billionaire Roman Abramovich, whose 164-metre monster called Eclipse was built in 2009 for somewhere between $600 million and $1 billion. But even smaller boats — take Frank Lowy’s 73.6 metre Ilona — can cost more than $100 million and a lot more, depending on how expensive the owner’s taste is.

But the purchase price only gets you into the super-yacht money pit. The industry rule of thumb says that annual running costs for a yacht is 10% of the purchase price; for owners like Microsoft co-founder Paul Allen, who owns the $200 million yacht Octopus (which includes its very own recording studio) it can cost up to $20 million a year to keep his palace afloat.

Fuel is a major expense (depending on the size of your boat, it can cost up to $2000 an hour just to go anywhere), staff are expensive (a big boat like Octopus could have as many as 50 staff at the height of summer) and just parking the things can cost a small fortune. At the recent Olympic Games in London, for example, prime berths in central London — where Frank Lowy’s boat was stationed — were going for as much as $15,000 a day.

Solomon Lew has not one super-yacht but two: the 54-metre Maridome and his other boat, Texas. The former — which reportedly sleeps 10, has a dance floor and once sported a mini-submarine — hit the headlines after a crash with another wealthy entrepreneur’s boat in a Florida shipyard. Wendy McCaw, a mobile phone billionaire turned media mogul, has sued Lew over the crash, which allegedly left a damage bill of US$500,000.

James Packer has bought and sold a few super-yachts in his time, but the family favourite remains the Arctic P, a former ocean-going tug boat that was purchased by James’ late father Kerry. The Arctic P was reported to have been docked in Auckland last week, but St Tropez and Sydney Harbour are its more regular haunts.

The Lowy family’s vessel, Ilona, was last spotted at the Olympics, but has travelled the world from Europe to Asia and all points in between. The boat has some nifty features, including a helipad that converts to a hangar, a special expandable table that accommodates up to 14 diners and technology that allows the boat to be refuelled by helicopter.

Reg Grundy’s 70.5 metre super-yacht Reborn (formerly known as Boadicea) has five decks and can accommodate up to 14 guests. Clearly Grundy loves to entertain — the yacht features a 14-seat cinema, a stage and a piano bar. When the boat was built in 1999, it even featured a real grass lawn where the Grundy family’s dogs could lounge in comfort.

Like most things in Clive Palmer’s life, super-yachts have caused him a bit of controversy. In 2009, he was roundly criticised for buying a $5 million yacht for his daughter as a 15th birthday present. Still, Palmer could end up dwarfing the likes of Lowy and Packer — the Titanic 2 ocean liner he plans to build would be the ultimate marine status symbol.

Britain has boats that stop themselves

Frank Lowy “technology that allows the boat to refuelled by helicopter”, that would be a neat trick if the boat was underway and the helo was hovering! Also, what civilian helicopter is equiped for refueling air to sea?
All I can add is, the whole crew above should not complain about productivity of the workers, with such expoensive toys (sure there is some tax dodge inherent in owning and running one). Seems to me they need to be paying more tax if they can watse money on such ostentacious wealth baubles.
What an immoral credo is capitalism.

Rich blokes trying to impress each other with the size of their yachts suggests overcompensation for something else. May as well wear a sign.

(sure there is some tax dodge inherent in owning and running one).

Buckley’s on that one.