Chinese activate ‘zoushuangai’ media: will it free the press?

The Chinese media landscape is changing, exciting and worrying local journalists. Is the firm hand of government control easing as proprietors are told to embrace commercialism and Western practice? 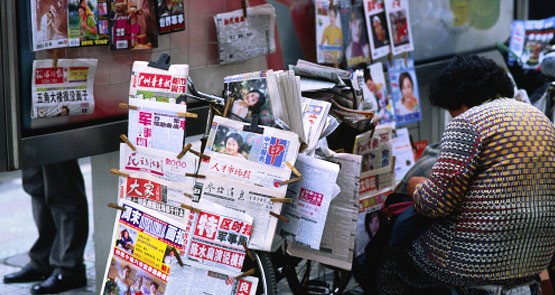 Sitting in the audience to hear News Limited CEO Kim Williams arguing against increased government regulation of media on Thursday were some guests who had a very particular, and in the Australian context unusual, perspective on what he was saying.

The Arts Faculty at the University of Melbourne was hosting four journalism academics from Fudan University in Shanghai to take part in a research round table, in which I was a participant with other colleagues. The morning after Williams’ address we were treated to a presentation from Dr Deng Jianguo, assistant professor at Fudan and a former copy editor at the Shanghai Daily, on the new policy of “zoushuangai” introduced by the government of China, and currently causing both excitement and confusion among journalists.

The policy — or “activity” as the government has tagged it — amounts to a change of direction for China’s state-controlled media. Whether it is a true opening — a move to Western ideas of a liberal press — or merely a more sophisticated type of propaganda remains to be seen.

Zoushuangai is an acronym. It stands for three core ideas: go to the grassroots; transform your work style and transform your journalistic prose style.

Viewed from Australia, Chinese media control can look monolithic. We outsiders are constantly at risk of oversimplifying and misunderstanding this country of rapid change and ancient traditions. Go to China and talk to journalists and you soon hear, as I did on a recent trip, about the frequent lists issued by the authorities about what must not be reported: lists that can include matters as serious as the disputes with Japan to as trivial as the doings of Kylie Minogue.

But this is the surface impression, and a partial one. Much more is going on besides, and over the last decade the media game in China has changed fundamentally. Zoushuangai is both a part of these changes, and a response to them.

The risk of oversimplification lies on both sides. The Chinese tend to view western views as monolithic as well — and they tend to assume that media reflects government policy. Whereas as anyone who was present at, or read the reports of, the Williams address will know that disagreement abounds, government and media bosses are engaged in a  constant dance of conflict and patronage, and two people looking at the same document, the same policy, even the same speech, might see two very different things.

Zoushuangai gives the lie to simplistic interpretations of what is happening in China. It is a serious change, and the government is clearly giving it high importance. As Dr Deng outlined, it has been propounded by the Minister for Propaganda at five different occasions between August last year and the present day, most recently last month. Terms like “media governance” are also being more frequently used in official announcements.

A team of researchers, of which Dr Deng is one, has been interviewing journalists and editors, as well as examining internal news media memos and policy documents, to try and work out what zoushuangai means for journalists and journalism in China.

Here is the background. Before 1979, the government had a monopoly on information reaching the public. Newspapers and television were government mouthpieces, and the propaganda was often crude. It is still the case that many of the big newspapers are relatively devoid of advertising — a clear sign they are not commercial ventures, but state-sponsored organs.

But as part of the introduction of a market economy, from  the 1990s news media has been encouraged to commercialise. China now has many newspapers that support themselves by selling advertising. In 1998, China’s media industry earnings totalled RMB 126 billion (US$16 billion). By 2005, that figure had nearly tripled to RMB 320 billion (US$40.5 billion).

The party’s newspapers were regarded as the “mainstream media”, in the official view. But the reality is  different. As alternatives have become available, government subsidised and party line mainstream newspapers have been shrinking and have become marginalised. The commercial ventures have become the new mainstream, in particular urban evening papers.

“As Dr Deng put it, China is attempting to make transitions in a few scores of years that took the West hundreds of years. This is true in media, as in many other things.”

Adding to this has been the phenomenon of Weibo, a Chinese version of Twitter (Twitter itself, along with Facebook, is blocked in China, but there are a number of local equivalents). On Weibo, citizen journalists are active, often commenting on and even giving the lie to government propaganda.

The combined effect has been that the party was losing its ability to use media as a tool of government and to set the agenda. Something had to change.

As in our own country, it isn’t all sunny in China’s commercial media world. For a start (and this may send a chill through the ranks of those recently made redundant from our main mastheads), journalists on some of the commercial papers in the mid 1990s were  paid as little as 300 yuan (about A$45) a month in salary, with other income depending on the number of news stories finished each month, with a minimum of one story a day. Meanwhile in a party newspaper in 1995, a reporter needed to write only three stories per month for a high and stable salary.

This meant that long-form journalism, or journalism that took in-depth research, was not possible in most of the commercial outlets. Journalists regarded as high calibre generally worked for the state subsidised media — which meant of course they were otherwise restrained. Journalists were caught between commercialisation and control. A recent Weibo post revealed that Xu Huaiqian, senior editor with the People’s Daily, killed himself earlier this year allegedly due to chronic depression. He once wrote that one of the major difficulties in his capacity as an editor was: “What I dare to think, I dare not to write; what I dare to write, I cannot find a place that dares to publish it.”

Zoushuangai, as the government describes it, urges a return to what we in Australia might call “real news”; that is, news of concern to the public. Journalists working in the official media have been encouraged to increase investigative reporting, to get out and interview people, and to boldly pursue the truth. For the first time, “beat” reporters, with contacts in industry and local government, are emerging. Weibo is a potent part of this mix.The research team of which Dr Deng is part has found that as of August 2012, the official government organ People’s Daily had 600 items a week of news that reflected this policy. The official television network, CCTV, has produced 217 items.

The prose style is changing too, with feature articles beginning to — so far as I can tell — more closely resemble the traditions of literary journalism that we practice in the west, with a “hook” to engage the reader and evocative rather than propagandistic prose. Examples Dr Deng showed to the research round table included news about the problems of rural doctors who had to travel long distances through hazardous conditions to treat villagers, and perilous journeys children in Xinjiang had to make to get to school.

Nothing is simple. As Dr Deng put it, China is attempting to make transitions in a few scores of years that took the West hundreds of years. This is true in media, as in many other things.

Nor should we assume this is a simple story of China becoming more Western. China invented paper, and the printing press. It has its own traditions, and will find its own way forward. Dr Deng told us that in the Chinese context, media governance is not about how to govern or control the news media, but about how to govern the country through the media.

Perhaps the most significant thing that has changed in Chinese media is that for the first time there is an overlap between what we might think of as journalistic standards and ideals, the demands of the market and the needs of the government. All require content to be relevant, interesting and, as Dr Deng put it, “somewhat truthful”. He says there is a new spirit and “celebratory ambience” among the journalists, including at state subsidised media such as The People’s Daily.

The research project continues to track the progress and impact of zouzhuangai. I suspect the question of whether it is merely more sophisticated propaganda or a move towards a different set of imperatives for journalism in China is one that has not been definitely answered in the mind of the authorities, let alone in the minds of practitioners.

Dr Deng referred to one obvious problem: what are the limits? Or as he put it: “What if journalists touch the red line?” There are of course many things the authorities will not allow, and the potential for conflict between journalistic ideals and government interests is immense. How will these conflicts be managed under the new policy? There will surely be limits. The problem is that in this experiment with greater freedom, nobody quite knows what they are.

In our own domestic debate about journalism, the idea of government-sponsored experiments with media freedom is almost a contradiction in terms. True independence, in the arguments of people such as Kim Williams, equates to and arises from commercial strength.

He talked about the primacy of the consumers, and the discipline that is imposed on news organisations which must compete for their attention. Yet, though he does not admit it, at a time when the business model for much of the Western news media is under strain, we may need to think through new ways of safeguarding the integrity of journalism, outside large and powerful companies.

Consumers, of course, are also citizens. It will be interesting to watch how China navigates the interface between those different roles.

*Declaration: I had a role in helping to organise and host the AN Smith Lecture, at which Williams spoke. Thanks for Dr Deng for the information on which this article is based.

Crikey Clarifier: what is Google doing in China?

Zoushuangai – is meaningless in Chinese. I think you may have possibly made a mistake – do you mean zou zhuan gai 走转改?