Rundle: 90 minutes is a long time in US politics …

From a debate week disaster, to the latest job figures "boom", Barack Obama is riding the yo-yo of break-neck politics. Guy Rundle writes from the US presidential campaign trail. 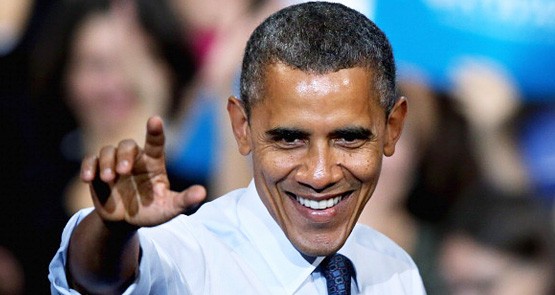 You keep having to recalibrate the old saying “a week is a long time in politics” — for Barack Obama, the 90 minutes he spent on stage with Mitt Romney last week might well qualify for the adage, as the less-than-stellar performance has become, in the public memory, a disaster of unutterable proportions.

The New Yorker took the opportunity for a rare-anti-Obama cover, showing Mitt Romney debating Clint Eastwood’s empty chair — and thus giving that moment something of a positive refashioning in retrospect. “Seventy people watched the debate, on TV, iPad and from one of the podiums,” said Saturday Night Live’s Seth Meyers in the “Weekend Update” section. And so on.

If Obama was ruffled by his own performance, he didn’t show it at rallies the next day, returning to the firebrand speeches with the civil rights cadences. Was this an admirable determination to get back on the horse, rule off and not get mozzed? Or part of the notorious Obama arrogance, an unwillingness to be struck by any negative information about himself coming from the outside? Whatever the case, his every move was jumped on by the Right, who had previously talked up his “fearsome” debating abilities, whip-smart intelligence, etc etc. This was then revised to “why the shock that Obama lost?” and “Obama’s emperor-has-no-clothes moment”, etc, revising the position to argue that Obama had never been any good, and was merely protected by a media bubble.

The position was nonsense of course. Obama was not being compared with Romney as a debater — Obama was being compared with Obama, the debater and speechifyer of yore. There has always been a distinction made between Obama, the teleprompter-fed speechmaker, who can be electrifying, and the debater, who is competent, but often less than stellar. In debates with Hillary during the 2008 primaries, Obama gave as good as he got —but a lot of the intra-Democratic debates (in contrast to the rallies) were wonkish and particular, over health-care models and foreign-policy. During the 2008 presidential debates, Obama was the able prosecution against McCain, who could neither separate himself from the Bush era, nor advance an independent path. Obama merely had to look competent and serious at that point.

Had the debate been attended by the Mitt Romney who has stumbled and bumbled through the past weeks and months, it would have been matched to a draw, or a slight Obama win. If Mitt Romney was ever relaxed in the game of politics, the rallies, and meeting-greeting, he hasn’t shown it this year. But he always been a competent debater, and he had weeks of intense preparation, to be quick on his feet. To this he added an extra layer of persuasion by outright, outrageous lying. The man who heads a party obsessed with repealing Obamacare and “getting government out of people’s health” now says that his plan will not remove the Obamacare provisions that ban insurance companies from refusing cover to people with pre-existing conditions. Since this has not only been corrected elsewhere, but by Romney’s own campaign, using it in the debate was audacious indeed.

Romney added to this by claiming that he could extend US$5 trillion in tax cuts to the wealthy without increasing taxes to the working and middle class, nor making cuts to ring-fenced funding programs in health, social security, etc. It was a blitz that left Obama in a tricky position — act as prosecutor rather than President, and give the impression that Romney is in charge, or ignore them and continue to mount his own case. He tackled the $5 trillion gap, and let other things through to the keeper. A more talented and/or less distracted politician would have been able to state grand themes, and then include a series of stunning refutations in the detail.

“In the wake of the debate, the notion of ‘skewing’ disappeared, and attention turned to the polls with laser-sharp vision …”

But Obama is not a street-politician of that order, a Clinton or a Keating, and there seems little doubt that he was under-prepared. There is no doubt that he was playing it low-key, for various reasons. But the idea that he was letting all these fabrications go unanswered is rather wishful thinking on the part of the Democrats.

But a week, a 90 minutes … and an overnight is a long time in politics, and the next day there was deliverance of sorts, with the release of the monthly job figures, which had fallen from 8.1% to 7.8%. Those are still pretty terrible numbers — given that they themselves under-report lapsed jobseekers, and the underemployed — but they took the figure below the psychologically important 8% figure for the first time. The announcement wiped Romney’s triumph from the news cycle, and the Republicans began a desperate campaign to counter them. By pointing out the underlying structural flaws, the tenuousness of the employment in question, etc etc? No they said the books were cooked. High-profile CEO Jack Welch was first out the gate, tweeting that the figures were unbelievable and that it was “Chicago” style — can’t debate so cook the books.

This was yet another example of the extraordinary mix of wiliness and delusion that characterises the Right at the moment. As Obama’s poll numbers had climbed in the wake of the conventions, the Right had begun a long campaign trying to “expose” the poll figures as “skewed”. “Skewed” became the word-du-jour, an accusation that they tried to argue by … well I could barely follow it. The gist seemed to be that because polling asked questions about voting intent, and party identification, and because Democrats came out with a higher figure on the latter question, then any advantage enjoyed by Obama was illusory. That people may simply identify with the Democrats more in the wake of the Romney’s serial debacles, was not mentioned.

In the wake of the debate, the notion of “skewing” disappeared, and attention turned to the polls with laser-sharp vision. Then the jobs figures came out, and a whole new conspiracy theory was launched, with the dourly correct Bureau of Labor Statistics suddenly accused of being part of the Windy City mob. The Right may well stick to that latest ADHD meme, as the post-debate polls coming in suggest that Romney’s post-debate bump has not been massive. The Gallup seven-day poll out today stretching across the before-and-after period of the debate has Obama holding a lead by three points, while the Rasmussen three-day poll taken after the debate has Romney in the lead by two. This has been presented as a huge turnaround, and sounds striking until you compare it to Rasmussen’s last poll in September, which had a lead of two points … to Romney.

Since Rasmussen has to be shifted three points to the Democrats to render it accurate, that suggests that Obama retains a narrow lead. Should that hold, we’ll see a return of skewing before you can say “delusion reactionary dittoheads”. Whether this malarkey is to any advantage remains to be seen — the Right has become so slippery that even independent voters are beginning to notice. With the vice-presidential debate ahead, we’ll see a cease of the Joe Biden is “dumb-and-dumberer” rhetoric and more about what an old-school bare-knuckle political fighter he is etc etc, can’t expect too much of poor old Paul Ryan, hitherto constructed as the towering intellectual genius of Congress, etc.

One thing, however, is certain, no matter who says it: Obama will have to win the second presidential debate on the 16th, which is in a town-hall format. Otherwise, he will be in deep trouble. Ninety minutes is a long time in politics, but four years, as opposed to eight, has the terrible air of a flash-in-the-pan.

This is all very well but what about the more important political debate ie: Stewart vs O’Reilly?

Of course the Obama media won’t mention that Obama didn’t have his teleprompter on the night of the debate and without it he can’t speak. The man is a fraud and needs to go. I am not sure if Romney will be a better leader but he will be better for America.