Poor little Tony. The macho man is looking decidedly un-macho these days. What a plaintive plea he made at the weekend for Julia Gillard to stop picking on him.

From an AAP report:

He says Labor ran a similar smear campaign against Campbell Newman, who led the Liberal National Party to a landslide victory over Labor in Queensland’s state election in March.

“We saw in Queensland before the state election up there a nasty, personal campaign against Campbell Newman and his family,” Mr Abbott told Network Ten on Sunday.

“This is typical of the contemporary Labor party. When you can’t defend your record, when you’ve got nothing of substance to say, you go personal and that’s what they’ve been doing.”

Asked who was behind the campaign against him, Mr Abbott pointed the finger at the prime minister.

“In the end the person who’s got to take responsibility for what happens with any political party is the leader.”

Poor little fellow. Quite pathetic really to see an Oxford blue in boxing hiding behind his wife’s skirts.

A Deep Purple lot. And the choice of snippets readers for the Rock n Roll Hall of Fame is … Deep Purple. 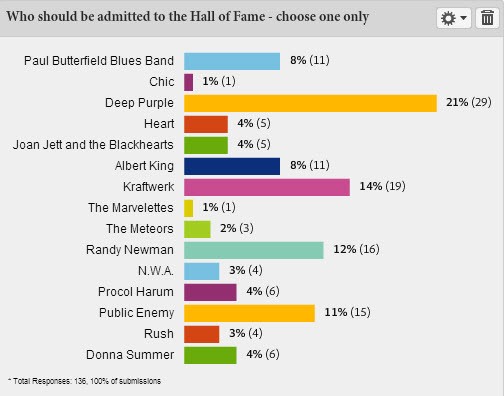 And over at the voting site proper the early leader is Rush with Deep Purple in second place.

It’s a dog’s breakfast (and dinner), as Bluey wins all day long

Quite like Abbotts Line””In the end the person who’s got to take responsibility for what happens with any political party is the leader.”

As Jones was speaking at a formal LP function and used the term “we” in the sentence about being soft on the PM does this now mean that Abbott will take ownership andc responsobility for Jones’ remarks ?

….. what happens when a “swingin’ Dick” has to go out into the cold?

“This is typical of the contemporary Labor party. When you can’t defend your record, when you’ve got nothing of substance to say, you go personal and that’s what they’ve been doing.”

How the hell can Tony sleep at night?

He probably delivered that line with a big fat “I can’t believe the media lets me get away with this shit” grin?

I’m with you tinman

If I was Gillard I’d say if you want a debate about policy & substance bring it on. Let’s see if Mr Abbott can do more than just utter slogans and wear Hi Visability Vest and safety hats