Margie and Tony Abbott are more than welcome to join the ranks of the feminists. And the fact that they want to do so speaks volumes for the comeback of a movement written off by John Howard.

I believe that feminism is a broad church (I have occasionally joked it is a broad’s church) and that almost any political, religious or world view is compatible with feminism, except a belief in restricting reproductive rights for women. That, to me, given that it hands agency over a woman’s body to others, is a bridge too far. It’s the equivalent of saying you are a Christian but don’t believe in God.

But, apart from that proviso, in the spirit of the more the merrier, I will cheerfully accept anyone who claims to be a feminist as a feminist.

So I was delighted to read that Margie Abbott has publicly declared her husband to be a feminist. A result, she says, of raising three daughters and being surrounded by strong women. All of whom have dutifully trotted around in his wake in the last few days touting his previously well-hidden feminist credentials.

To give him his due, I was impressed to hear from Margie that he recently raised $140,000 for the Manly Women’s Shelter by cycling some absurd number of kilometres. (Can’t help wondering if anyone has thought hard about the name “Manly Women’s Shelter”. It is hilarious.)

I do not intend to debate here whether Margie Abbott’s worse half — he called her his better half, after all — actually is a feminist or not. To me, that’s not what’s important. What has rocked the world on its axis, as far as this old feminism-watcher is concerned, is the claim should be made at all about an avowedly right-wing prime ministerial hopeful and, moreover, claimed proudly. Quite frankly, that’s bloody revolutionary.

Only 10 years ago members of the last Liberal government, including PM John Howard, claimed feminism was done and that we were in a post-feminist era. (The first time the word post-feminism was used, I believe, was in 1911. Women are always being told that feminism is past its use-by date.) Feminism was the movement that dare not speak its name. Women’s conferences died in the bum in the ’90s — I know, because I make a considerable part of my income speaking at them and the work dried up — and hardly any women were prepared to identify publicly as feminists, let alone men. Departments for women, ministers for women were shut down or absorbed into other portfolios. Women were equal, damn it, and anything they did or didn’t get was their own fault.

How the world has changed. Politically, it began with the election of the Rudd government, but it really ramped up when Julia Gillard became our first female PM. After the initial euphoria, however, it started to look rather depressing. Expectations were so high that Gillard could do little but fall short of them. There was also the whiff of illegitimacy about her government given her failure to secure a parliamentary majority in her own right and the deals she was therefore forced to do (Abbott would have done them too, given the opportunity).

For a good two years, we saw a level of political invective and scorn that — while Australian political debate has always been robust — seemed somehow more personal than before. For the first time, largely because it was the first time we’d had a woman leading the country, many of the most vitriolic comments were focused on Gillard’s gender. Jockeying for power is always about amplifying perceived weak spots and being a woman was quickly seen by her opponents as a weakness to be exploited; just as it commonly is in business. And for a while, it looked as if her critics had found a seam of gold.

Hubris, however, is always risky and the tactic of unremitting and nasty pressure on Gillard started to get out of hand. For every legitimate scandal — Craig Thomson, Peter Slipper, etc — there was an equal amount of plain misogyny. Women, in particular, began to feel uncomfortable with the level of abuse that seemed to be based around our Prime Minister not being a man. She may not have been any great shakes as PM, but the “worst Prime Minister we’ve ever had”? That always sounded shrill and hysterical, particularly to female ears.

The extreme fearmongering around the carbon tax also — eventually — played into Gillard’s hands. That strategy must originally have been predicated on the Gillard government falling long before the tax was implemented, but the gamble did not pay off. The sky having failed to fall in as predicted, the Liberals and the doom-laden anti-carbon taxers now not only look a bit silly, but all their other fearmongering, including dog whistling to anti-women prejudices, has been called into question.

As a result, the tables have turned a little more in Gillard’s favour. She’d still lose an election held today, but no longer would it be a wipe-out. The very fact that the Abbott females have been wheeled out proves she’s got her opponents rattled.

But there is something else that may be the most powerful and uncontrollable element in the revolution we are seeing in the growth of women’s political power and influence. After all, this isn’t just an Australian phenomenon. Republican presidential candidate Mitt Romney also has a problem with women voters (again, probably due to his views about reproductive rights) and has also wheeled out his wife to try to woo them.

Social media is giving all sorts of people access to the public square in a way that they have never had before, but women — just because of their numbers — are benefiting disproportionately. Men are still overwhelmingly the gatekeepers of traditional media, bricks and mortar business and the powerful end of town, but the conversation is rapidly moving elsewhere. Women have flocked to the internet and they are making their presence felt. They no longer have to seek male approval to get the job, the article published, their face on the telly or their voices heard. They just need to attract readers, customers, purchasers, friends, followers and views. And they are.

If feminism is about women’s equality of opportunity and right to participate in every aspect of life, and I think that it is, then it is not surprising that as women have found a vehicle which gives them equal access to the public space, feminism has correspondingly risen from what some may have fondly hoped was the dead.

If Tony Abbott needs to be seen as a feminist before he can have a shot at being our next prime minister, then we’re winning.

Religion v feminism: which has done more for humanity? 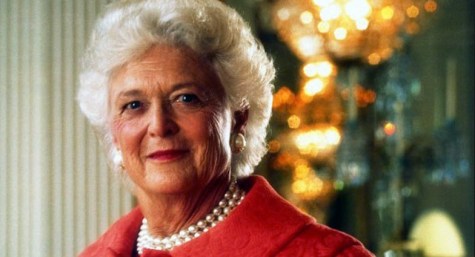 Razer: feminism doesn’t mean we have to be nice about Barbara Bush

Jane, this is a fantastic article and contains an astute analysis of current politics and of the changing political dynamics in this country. One thing I don’t agree with is your assertion that JG is no “great shakes” PM. I think she is very good PM and has the opportunity to be a great PM, particularly if she wins a second term to pave and cement the way for her policy agenda. I think the few political (political not policy) stumbles that she has made earlier on in Rudds and in her own term are beginning to be negated by her policy achievements. She’s a domestic doer, in a truly progressive sense. What other leader can compare to what she has actually done in a policy sense, with a hung parliament, no less. There is no way that Abbott would have been able to do that. JG is also scoring runs on the board as a better saleswoman for the govt’s policies (which is needed in her role as PM) as well as a more politically astute communicator and media performer more generally. Her communication strategies, including when to remain silent and when to come in, is beginning to pay dividends. She is not ‘personal’ and she handles herself with grace, unlike Abbott who can’t seem to be anything other than be personal (not a good look as an opposition leader, let alone leader of this country). Don’t write JG off, she is a force to be reckoned with.

Jane – I’m inclined to agree with pretty much everything you’ve written. I’d like to think of something to add – but I think you’ve nailed it. PS i’m a bloke.

Is this what happens when one side lists too much to the Right, “for votes”?

Excellent piece Jane. The fact that women are benefiting disproportionately from the growing power of social media, is one of the things that make this particular revolution so much fun.
I haven’t enjoyed watching heads explode like this since the late 60’s and early 70’s.
Long may it continue.