Women aren’t destroying the joint, they’re deciding who runs it

Women voters could make or break the US presidential result. Tanja Kovac takes a look at gender-based campaigning in the US, and gleans some lessons for Australia.

With its soft colours and pretty script, everything about Women for Obama has been designed to appeal to women. The campaign was established in 2007 to lure feminists away from Democrat rival Hillary Clinton, then to shore up the female vote on the presidential campaign trail. Women for Obama is back in 2012 — and it’s working.

Gender-based campaigning is no side issue in the US election. According to the Pew Research Centre, Obama has a 20% lead over rival Mitt Romney among women voters. More than one million people like Women for Obama on Facebook, while Romney’s version — Women for Mitt — manages only a quarter of that. The gender gap could be seen in yesterday’s presidential debate; the CNN’s female “worm” was keener on Obama than the male worm.

So what is Obama doing right, and Romney doing wrong? And what lessons could be learned on winning the female vote for political strategists in Australia?

The issue seems to be at a high-water mark domestically. Tony Abbott’s wife Margie staged an unusual intervention in the gender debate today, writing a column for New Limited on how “Tony gets women”. This comes in the wake of debate around Tony Abbott’s treatment of women while at university, and questions over his ties with broadcaster Alan Jones, accused of s-xism against Julia Gillard. And a Newspoll in The Australian today found voters were sharply divided on leadership: women think Gillard would make a better PM (41-36), while men prefer Abbott (42-34). Those kinds of margins can win — or lose — elections.

Turning to the US, the first thing Obama said in yesterday’s debate, when asked about the all-important question of the economy, was:

“There are a lot of points I want to make tonight, but the most important one is that 20 years ago I became the luckiest man on earth because Michelle agreed to marry me and so I just want to wish, sweetie, you a happy anniversary and let you know that a year from now we will not be celebrating it in front of 40 million people.”

Romney, for his part, countered by talking of his wife Ann’s encounters with people on the campaign trail.

The use of images and diagrams to explain complex social problems to time-poor women voters is critical.  This is a visual age where almost everything has an app; political visuals explain systemic issues quicker than a thousand speechwriters. Both the Obama and the Romney campaign have been using visuals with women, although Obama seems to nail it more. Obama’s campaign tends to use not policy or vitriol, instead cultivating a sense of community amongst women. Cartoons, humour, memes and e-cards are used, with a broad, soft-feminist appeal.

Here’s Women for Obama on Romney’s policies on birth control: 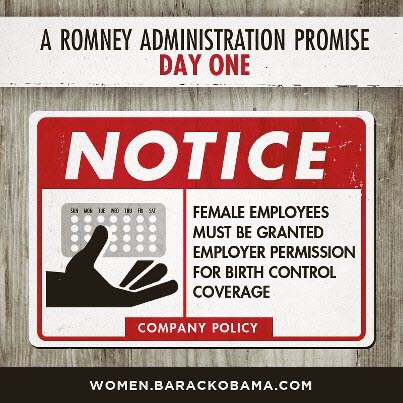 And Women for Mitt use this on Obama’s economic policies: 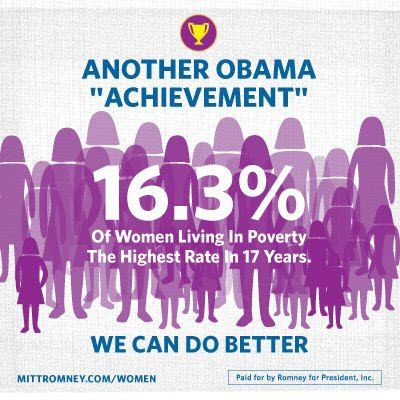 Romney’s campaign relies on photographs of women; he’s had success with moving images too. His Dear Daughter ads have been viewed by over 174,000 people on YouTube and given prime time slots. While the overt message of these “baby ads” is on the intergenerational consequences of Obama’s debt, the dog-whistle is on abortion. Dear Daughter aligns Romney to the economic rights, as well as the right to life, of the unborn.

From the Obama camp comes the political cartoon Life of Julia, while the pro-life movement gives us The Life of Maggie.

Women pay attention to what celebrity women do. Many men have inbuilt recall of sports stats and cars; many women know the details of the Katie and Tom divorce. Women for Obama masters this. Natalie Portman, Ashley Judd and Beyonce have all recorded videos for the campaign. Scarlett Johansson, Eva Longoria and Mary J Blige appeared at the Democratic Convention 2012. Sarah Jessica-Parker fundraises.

Obama’s campaign has integrated women’s policy into its central messages — selling Obamacare, and promoting a role for government in economic management and wealth redistribution, appeals to many women, who often carry the caring burden for the young, old, disabled and veterans. When a campaign promises to deliver equal pay for women and to shift the healthcare burden off individual families and onto the state; women listen.

Women for Mitt suffers from the Republicans’ long-term disconnection to the feminist movement. This is a big challenge for Women for Mitt (and neo-liberals and conservatives in general) — they fail to recognise that macro-economics is understood by women through the prism of micro-economics, the politics of the household budget and their own sphere of influence. When historically so much women’s work has been unpaid and not “economically valued”, it’s no wonder reducing everything to monetary terms disconnects with women.

The Democrats embody a care economy; the Republicans a laissez faire economy. The Democrat campaign is feminised around the care principle — whether it’s Obamacare, support for veterans or funding for education. Care is not a natural narrative framework for hawkish, pro-business, pro-military, pro-tax-cut Republicans.

Escaping the confines of this political typecasting is not easy. This is why Romney spent the majority of his time in the debate yesterday selling himself as Republican Lite, committed to healthcare and education. It was a strong performance, but unlikely to overcome the long-term alignment of his party to individualism and self-sufficiency.

Other interesting lessons on gender-based campaigning include the importance of merchandise (see: Women for Obama Campaign merchandise) and the use of gendered displays of love and devotion; the political equivalent of the popular book, P-rn for Women.

*Tanja Kovac is a writer, lawyer and research fellow at Emily’s List

Why did Mr Abbotts wife have to come out and say how wonderfull he is with women. Having your wife comment about you doesnt matter.Of Course she would say that.Could you imagine what would have happened if Tim came out and and did this for Julia.Give me a break.Sorry to break it to some Liberals ,But Tony is not God. He likes to dish it out but the minute sombody says anything slighly disparaging towards Mr Abbott the Liberals panic in disbelief.

Thanks for the interesting analysis, Tanja.

Isn’t this a little like getting your sister/ mum to fight your school ground battles. Come on, how busy is this woman going to be, trotted out everytime someone has a slap at Tony. After years of snapping and snarling at everyone like a junkyard dog and now some are calling his bluff. He runs and gets his missus to back him up.

The stuff from the US is interesting also. Women over there have undergone a “war on women” on the terms described by Tanja Kovac: namely attempts to put women back in the kitchen at precisely the time they are compromising access to contraception and pursuing an anti welfare/ go easy on the rich election platform.
Most people here would similarly identify the Coalition’s policies as less egalitarian than Labor’s.
Therefore it would be interesting to see if a similar leaning towards Labor is occurring amongst Aussie women.