Journalism legend AN Smith could scarcely have foreseen the lecture series devised in his memory could have warped -- 76 years later -- into a brow-beating session equating Rupert Murdoch's business interests with those of the Australian public.

Journalism legend AN Smith could scarcely have foreseen the lecture series devised in his memory could have warped — 76 years later — into a brow-beating session equating Rupert Murdoch’s business interests with those of the Australian public.

But last night’s sermon from News Limited CEO Kim Williams at The University of Melbourne was all that and more.

Hacks, Kim said, were “the last bastions of idiosyncratic public individuals who say what they want without fear of favour”. Sadly, the louche allusions were rapidly betrayed by his prissy pronunciation of the “digital revoluuuution”, and its “illuuumination” of modern life.

It was all downhill from there. The torturously-titled “Media futures: observations through a rather frosty crystal ball” suggested Williams, rather than being on the outside looking in, was in fact trapped inside the ball, flailing about in the fog (or frost?).

Early on, the freshman CEO setup his “Chekhovian moment” — taking the loaded gun of government regulation off the rack — before launching into a celebration of whatever-it-takes ratbaggery. “Rude behaviour” from “downright rude” journalists needed to be encouraged, he said.

But the examples Williams gave of top-notch reporting — Caroline Overington’s AWB takedown, Watergate and The Australian‘s “160 major” recent exclusives — bear little resemblance to the main complaint of Murdoch haters: the reverse-engineered stories that begin with a target and seek out “facts” to fit the prejudice.

He was similarly orgiastic about advancements in microchip technology — the “unprecedented shifts of power from producers to consumers” means “the news agenda is no longer controlled by press barons”. “There is more media diversity than at any time in our history”, he reckoned.

But as Crikey has previously demonstrated, the rise of the web has actually tightened News’ squirrel grip on news consumers though its control of 15 of the country’s top 22 journalism websites. That’s on top of the heaving print base — of the 17.5 million capital city papers produced each week, 12.3 million emanate from Rupert’s presses.

Williams added his own helpful stats — News sells 11 million newspapers each week, read by more than 13 million different people. The Sunday tabs sell over two million copies, and each week five million community papers hit letterboxes. Over eight million people visit digital properties every month, some as often as five or six times a day. News.com.au has 2.5 million unique browsers, the Herald Sun 2.13 million, the Daily Tele 1.1 million and The Australian just over 1 million. There are 40,000 paying subscribers to The Oz‘s digital subscription offering (tellingly, there was no mention of how many people had paid to get behind the Herald Sun‘s paywall.)

An empire in anyone’s language. But amazingly, Williams somehow thinks that the “creeping” regulators of the Finkelstein and Convergence Reviews, the “descendents of the Luddites who were conveniently transported to Van Diemen’s Land in the 1830s”, were about to break up the party while simultaneously protecting the status quo.

“The new Luddism of the digital revoluuuution,” Williams said, “only protects the strong, the big old media companies who want to deal in political favours from the government of the day”.

The bespectacled son-in-law of Gough Whitlam might have had a point if he was talking about the Government’s blatant regulation for the free-to-air channels over Foxtel. But in a nation of one paper towns, the claim seemed naive in its lack of self-awareness.

Chekhov returned — “regulating for diversity is my hung pistol”. The proposed public interest test was “a solution in search of a problem” and actually a “government interest test”, and the Fink’s News Media Council was “nothing more than a star chamber”.

But as Matthew Ricketson told the Centre for Advanced Journalism in May, such “jailing” claims are close to pure fantasy — the current government-appointed broadcast regulator ACMA has been such a damp squib that frequently-investigated identities like John Laws and Kyle Sandilands laugh each time it breaks out the wet lettuce.

According to Williams, the regulators “pine for a return to old-fashioned journalistic gentility and politeness complete with its own set of gentleman’s club rules that is not possible in the real world of truth telling”.

These alarming threats to press freedom are piloted by the new Luddites — one of whom, Denis Muller, was in the audience and would later attend a secret after-party dinner held under the Chatham House Rule. Crikey understands the atmosphere over beef with jus was one of seething resentment.

In the question and answer session, Williams was asked whether it was in fact Finkelstein who had impelled the decision to increase funding to the Press Council. Nup, he said, News has been in favour of bolstering support for the last “two years”.

But it wasn’t always this way. It’s worth casting an eye over Murdoch (and Fairfax’s) hysterical response to the arrival of the Press Council in the late 1970s. Times may have changed, but the feral reaction stays mostly the same. 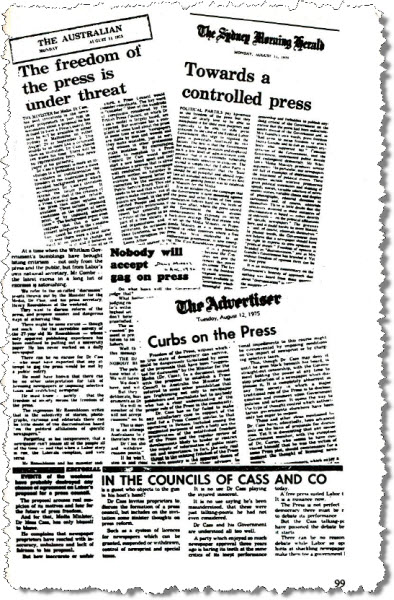 “Kim O’Saaby, don’t eat the yellow snow while you’re stuck in there!”

As for “star chamber”?
Is that anything like Limited News in partisan high dudgeon at full flight – editing the news (we get served – the way we get to see their version of it) to suit it’s views?
Like “Tony’s Make-over” today?

For true masochists,…here’s a link to the Kim Williams speech. https://www.youtube.com/watch?v=FsgGiqVHO8k&feature=youtu.be Via @MargaretSimons on twitter