Yesterday it was the Australian Bureau of Statistics’ figures for engineering construction activity. The two southern states most dependent on manufacturing saw a decline in trend terms while in every other state the trend was up. Today the retail sales figures from the ABS show Victoria and South Australia lagging behind most of the rest. 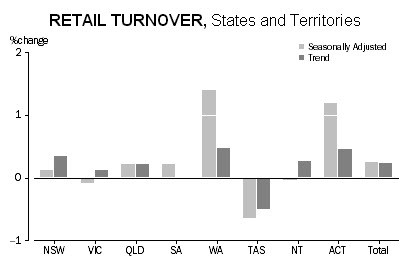 On the same wave length. Australia’s Reserve Bank and the Asia Development Bank based in Manila are delivering similar messages about economic conditions. This week the Reserve Bank cited weakening growth prospects in China as a reason it was lowering official interest rates. Overnight, the ADB reported that dimming global growth prospects and soft domestic demand in the region’s two largest economies — China and India — was slowing the pace of developing Asia’s expansion. Growth is now expected to slide from 7.2% in 2011 to 6.1% in 2012, with a bounce back to 6.7% in 2013.

The key messages in the ADB’s report: