Some 50 sponsors have now quit Alan Jones' show and activists are now targeting the board ... Rupert Murdoch will face angry shareholders at News Corp's AGM ... could Fairfax merge to save itself? ...

Media analysts have valued the impact on 2GB owner Macquarie Radio Network’s bottom line at $80,000 for each day sponsors stay away — however, they also claim they’ll crawl back when the storm subsides. But as Crikey reported on Tuesday, many of the same names who fled 2Day FM’s Kyle & Jackie O Show over Sandilands’ notorious “fat slag” comments late last year are yet to return.

Tate also chairs Collins Foods — which runs Sizzler in Australia and KFC in Queensland — and the NSW Central Coast’s Bluetongue Stadium, home to the Mariners. Incidentally, the stadium is leased by ad man John Singleton, who controls 70% of the shares in MRN. Jack Singleton has his own advertising firm, Jack Watts Currie, and has founded three businesses — 1300 Flowers, Phone Names and LastTix. Donnelly is a partner at Ferrier Hodgson, the Asia-Pacific’s leading corporate advisory firm.

Former Channel Seven executive and board member Plavsic is a director at Bestest, a children’s charity fund-raiser. Thompson, appointed in March, is chief legal counsel at investment banker Mark Carnegie’s firm MH Carnegie and Co and is a director at Lazard Pty Ltd and Text Publishing, while Loewenthal, promoted to MD from COO in March, does not appear to hold any external positions.

Carnegie himself resigned from the MRN board in March, well before the latest Jones controversy hit home. However, he remains MRN’s second biggest shareholder with a 15.7% stake through his private company PEC Nominees. — Andrew Crook

While other Labor MPs such as Wayne Swan have assailed Alan Jones and Tony Abbott for “filling our national debate with bile, aggression and needless personal abuse”, their own Senator and Parliamentary Secretary for Defence has been repeatedly tweeting an unflattering Milne photo with the facetious tagline “the different emotional states of Christine Milne” — the hilarious joke being that while the caption changes (“Euphoric”, “Elated”), the picture doesn’t. The first tweet came 12 days ago and he’s kept up the barrage ever since.

The attacks have now prompted an open letter, slamming the senator on behalf of “all sensible Australians”. Feeney, not exactly the prettiest picture himself, is third on the ALP’s Victorian Senate ticket, and is up for re-election next year. He narrowly beat the Greens’ Richard Di Natale in 2007, though the latest polls suggest he’s headed for political purgatory. But as Crikey has previously reported, his national factional heft is such that he’s likely to secure a lower-house chop out before his term expires in mid-2014, possibly in Julia Gillard’s seat of Lalor. — Andrew Crook 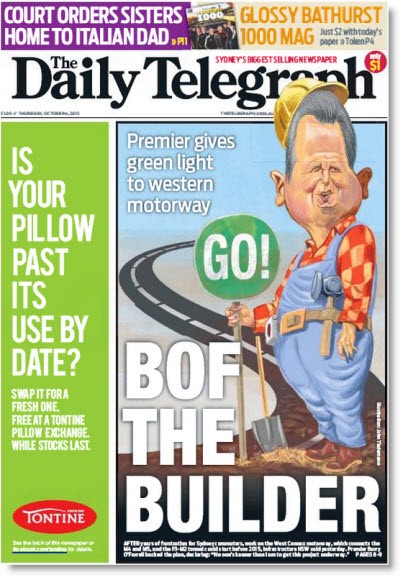 “Shareholders have stepped up their campaign to remove Rupert Murdoch as chairman of News Corporation ahead of the media company’s annual meeting this month. Hermes, a British fund manager that controls £24.8bn assets, joined an action on Wednesday launched by dissident shareholders seeking to oust News Corp’s chairman in the wake of the phone-hacking scandal.” — The Guardian

“Fairfax Media’s second-biggest shareholder has urged the company to consider a merger and reiterated calls to sell assets to maximise shareholder value.” — The Australian

“Pearson Chief Executive Marjorie Scardino is to step down after 16 years, departing earlier than expected in a move that could clear the way for the global education and media group to sell the Financial Times newspaper.” — Reuters

“The Bulldogs’ report into the Mad Monday disgrace is in the hands of the ARLC — now Channel 9 wants the foul-mouthed individuals responsible for the s-xist abuse to ‘man up’ and apologise to their female reporter.” — The Daily Telegraph

I can’t understand why Woolwoorths have “pulled the pin on that silly grin” – when it’s executives seem to think so much of his sort of politics – if the actions of one of them – by donating a jacket made of a chaff bag to such a cause – is what they stand for?
Another PR stunt?
If that’s not indicative of their “values” – why keep him on?

He has gone – “under his own stream”?