Peter Slipper and Campbell Newman zoomed up the charts of media mentions this week. But nobody had more attention than a certain Sydney shock jock ...

Speaker Peter Slipper zoomed up our coverage chart this week, as media reported the latest in the s-xual harassment case against him, and his former staffer James Ashby pursues civil action after the Commonwealth case settled last week for $50,000.

Federal Court Judge Steven Rares ordered the pair to attend mediation, slamming Slipper for failing to appear in court yesterday. Slipper was obviously tied up with speaker duties. Ahem. Attorney-General Nicola Roxon suggested the case against Slipper should be dropped and brought to a speedy conclusion, angering her opponents.

Roxon, along with Trade Minister Craig Emerson and Transport Minister Anthony Albanese — who took a pot shot at Campbell Newman and the federal implications of Queensland transport cuts — responded emphatically to comments made by radio host Alan Jones about PM Julia Gillard and her late father at a Sydney University Liberal Club event.

In media coverage terms, the outpouring of sentiment towards Jones has been unprecedented. Our comparison below shows the arch conservative received more coverage than the PM in the past week — which takes some doing — including unparalleled social media coverage in response to his public vitriol. 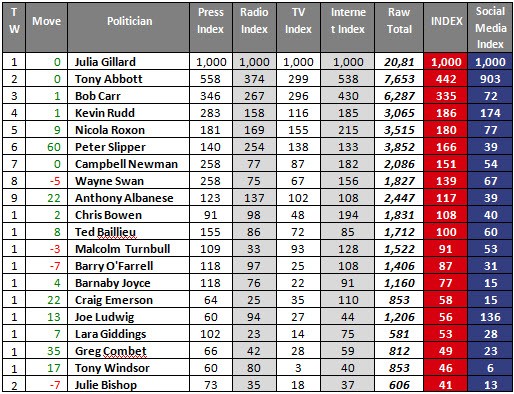 Agriculture Minister Joe Ludwig garnered a huge social media response from animal rights groups this week for defending Australian sheep exports to Pakistan in the face of slaughter claims. But not as much coverage as K-Rudd who has been more actively maintaining his love affair with the public.

Australians have never been so vocal in calling for an end to hate-mongering in the media. The karma kops are knocking at Jones’ door and it looks like they’ll “pick and stick”.