Labor leadership challenge on hold ... Health back on the agenda ,,, Opinion polls in the US ...

Not this year for Kevin. The prospect of a challenge to Julia Gillard’s Labor Party leadership is declining by the day. The mood for change is disappearing as the pollsters report an improvement in both her personal standing and in that of the government she leads. The Crikey Leadership Indicator reflects the change. From the majority opinion of the market two months back being that she would be replaced, the indicator now has her as a 62% chance of still being Prime Minister come election day. 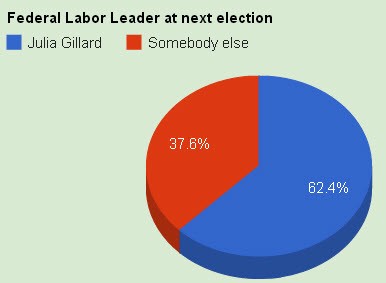 Doing less not more — partly by choice and partly forced by circumstances — seems to be working to Gillard’s advantage. And if that is true then with only 11 parliamentary sitting days (Note – mistakenly written as weeks originally) scheduled for the rest of this year, it is hard to see anything changing.

If Kevin Rudd actually does fancy another attempt at leadership, he will just have to wait.

Health returns as the weak link. If limiting public appearances is working for the Prime Minister, then perhaps the Leader of the Opposition would benefit from a change of strategy as well. Starting to talk again about health seems an obvious new starting point. This week’s news about not enough places for new medical graduates to receive their training in is ready made for an examination of those ending the blame game boasts.

What we think of polls. From National Public Radio in the United States comes a report that whether people think an opinion poll is partisan or not depends on whether they agree with the findings or not. Naturally enough, the story itself is based on an opinion poll — everything about politics these days seems to be — where people were asked if they thought pollsters were rigging their results to show President Obama leading Mitt Romney.

The poll found respondents virtually split, with 42 per cent saying “yes” and 40 per cent saying “no.” Eighteen per cent weren’t sure. The poll was conducted for the Daily Kos, the liberal blog, and the SEIU, the service workers union.

Not surprisingly, given how polarised the national psyche is, how one responded to this question had almost everything to do with one’s political party identification.

Asked if there was any partisan funny business in the polls, Democrats said “no” 65 per cent of the time, versus 14 per cent who said “yes.”

Flip that and you just about had the Republican view, where 71 per cent said “yes,” 13 per cent “no.”