‘Mitts off my muff’: the debate on female genital mutilation

It's difficult to say how common the illegal practice of female genital mutilation is in Australia -- but depending how you define it, it may be more widespread than many realise.

Female genital mutilation has been in the news after the arrest of seven people in NSW in relation to the alleged mutilation of two young girls — the first time anyone has been charged with undertaking the practice in Australia. But the issue may be culturally closer to home than many think, as critics of Western-style cosmetic genital surgery draw parallels between the practices.

NSW police recently charged a Sheikh, a nurse and another with the alleged genital mutilation incident; four more women were later arrested. FGM has been illegal in all Australian states and territories for several years; removing a child to another county for the purposes of FGM is also illegal.

Those charged in NSW are all reportedly Muslims of South Asian descent — where the practice appears largely restricted to the small Bohra community. Female activists within that community have recently launched an international online campaign to overturn it. Similar campaigns have been under way for many years in parts of the Middle East and Africa, where the practice is far more prevalent. A less extreme form of FGM (the WHO lists four forms, ranging from clitoridectomy to infibulations to excision to pricking) is practised in South-East Asia.

While FGM is frequently represented as an Islamic practice, it is practised across the religious spectrum in parts of the Middle East and sub-Saharan Africa (including by Christians, animists and Ethiopian Jews), and is virtually unknown in Muslim societies in South Asia.

The extent to which FGM is practised within Australia is unknown, with most information coming from health services which deal with the after effects. A study published in the Australian and New Zealand Journal of Obstetrics and Gynaecology recently, based on a survey conducted late last year, concluded:

“There is no conclusive evidence of FGM/C being performed in Australia and New Zealand, either from direct reports or children presenting with complications. Re-suturing post-delivery is being requested and performed by practitioners in Australia and New Zealand, although it is not clear that this involves re-infibulation. Anecdotal evidence suggests that FGM/C may be occurring, most likely by people other than registered health practitioners.”

As the study points out, it’s unclear whether re-suturing is illegal (arguably it may serve a medical purpose), but re-infibulation is illegal. (Terminology is important; some refer to FGM as “female genital cutting”, a less judgmental term which focuses on the practice rather than labelling the woman as “mutilated”.)

Sydney’s Auburn Hospital provides a specialised clinic for survivors of FGM. In some cases, patients have undergone the practice before migration to Australia, but in others it is suspected that it has been committed during return visits to the family’s country of origin. And while FGM is regarded as a patriarchal practice, it is perpetrated by women — mothers, aunts, midwives — who were themselves subjected to it. 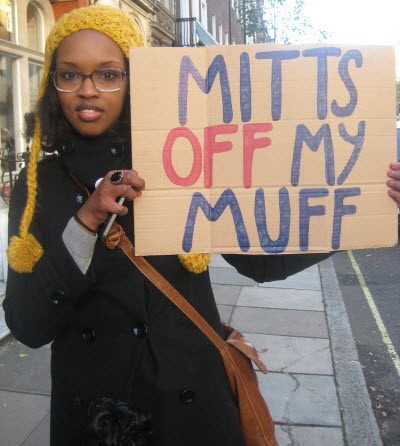 Nimko Ali wears her merkin to protest female genital mutilation at the Muff March in the UK (photo: Lisa Worthington)

“Western” protests against FGM are complicated by the recent boom in cosmetic genital surgery in the US and elsewhere. This point is generally howled down with protests that cosmetic labioplasty is undertaken on consenting adult women, while the prohibition of cultural and religious FGM is a child protection issue (as per a recent debate involving Germaine Greer on Q&A).

However, the legal prohibition of “cultural” FGM extends to adult women as well as to young girls, regardless of consent; although the procedure is generally undertaken in childhood, adult women may seek to have it repeated after childbirth or other damage. This policy is justified on the grounds that autonomy is not miraculously bestowed upon one’s 18th birthday and that young women living in the family home may still be susceptible to family pressure.

Cosmetic genital surgery, on the other hand, supposedly empowers those who undertake it by boosting their self esteem. Yet it can also be seen as women mutilating their bodies to conform to cultural norms and male expectations, just as surely as the “other”, prohibited forms of FGM which is the subject of the NSW charges.

Last year, I interviewed Nimko Ali, a young woman of Somali background and campaigner against FGM (a practice that she herself survived), at the “Muff March“. UK Feminista organised the Muff March down Harley Street to protest the pornification of women’s bodies, and in particular the growth in cosmetic gynaecological surgery.

While some commentators saw the Muff March as belittling the experience of survivors of “real” FGM, Ali saw it as very much connected to her own struggle. She described labiopastey as “FGM by another name”, and said that Somali community leaders in the UK were considering lodging a racial discrimination case on the ground that “their” form of FGM was outlawed, while “ours” had found a place within the British health system.

And so Ali donned a glitter merkin alongside UK Feminista supporters, and shook her muff before a band of Fleet Street photographers.

Hang on a minute! Neo-con half-truths under the microscope

There’s an extraordinary parallel between Female Genital Mutilation and the old Chinese habit of foot-biding. In the case of the latter it was a senile old Emperor who saw a dancer put scarves on her feet in order to dance on her toes. Apparently this caused the victims to adopt a swaying movement in their hips. Generations of Chinese women fell over themselves to inflict this agony and the smell of putrefying flesh on their daughters. An inheritance which saw women in old age suffering arthritic agony.

Doubtless it was another man somewhere in Africa or the Middle East, who waxed lyrical over the perfection of a very young female’s pudenda. Once again women rushed to perform this operation on their daughters, usually with the nearest sharp stone and the concomitant loss of life.

The late Christopher Hitchins was emphatic that FGM was the result of religion; Islam, Christianity, animist, whatever. He declared it to be a female version of male circumcision. Be that as it may, the practice, whether religious or not, is barbaric.

The last thing women in the countries concerned, whether Australia, Egypt, Sudan, wherever, should do is to point to Western women as an example of being comme il faute is merely an attempt to justify a stone age practice.

Because so many Western women are bird-brained, any attempt to use them as an example merely re-enforces the stupidity of the women who would practice this repellent procedure on their hapless daughters.

Male circumcism probably originated from medical reasons which became integrated with social & religious norms. FGM or whatever you want to call it seems to be purely another way of reminding women that they are chattels that has become associated with certain religious and cultural groups. As for the modern “fashion” of labioplasty amongst adult women – well who exactly is saying that a certain look is desirable? I have never heard of any men saying so. I’d suggest that it’s more likely insecure women who have seen other women via porn, and think they are not normal rather than any man telling them so.

MIKEB: I wasn’t trying to buy into the male circumcision debate-there’s a limit to the amount of heat I can take in the one day.

As with rendering males into castratos and or eunuchs there were/are different degrees of FGM. One rips out the clitoris another takes the labia majora as well, and so on.

“”FGM or whatever you want to call it seems to be purely another way of reminding women that they are chattels that has become associated with certain religious and cultural groups.”” Could not agree with you more.

The modern “fashion” of labioplasty {sic} probably came about as a result of a female needing the operation for medical reasons, together with the fact that she had a couple of sisters who talked about it. Result…””fashion”” The plastic surgeons concerned probably couldn’t believe their good fortune. Also, there are an awful lot of insecure people out there.