Marshall applied to attend the $100-a-head event from his personal email and did not identify himself as a journalist on the night. The SMH also published a piece by Damien Murphy raking over Marshall’s colourful past as a journalist in New Zealand.

“I find it extraordinary that the Herald would question the ethics of the Tele when they stole our story on Sunday night for their second edition, promoted it as if they had found it out and didn’t make any mention of where the story had come from,” a furious Breen told Crikey this morning.

He says he has sent Fairfax a breach of copyright letter over Heath Aston’s Sun Herald story on Jones’ controversial comments. “The Sun Herald are repeat offenders when it comes to stealing stories,” Breen said.

Breen, who will depart the paper in October, says Marshall had attended the event as part of an investigation into student politics rather than to catch out Alan Jones: “It was not a private dinner. He was entitled to go to that dinner and listen to what was said and report on it.”

As for his post-Tele future, Breen would only say: “It will definitely be in TV.” — Matthew Knott

Digesting Epicure, Good Taste relaunch. The unveiling of the new-look Fairfax foodie liftouts has many restaurant lovers breathing a sigh of relief, with most local content remaining — although clearly focused on reviewing. 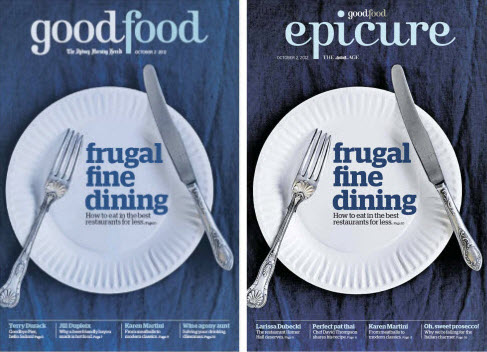 From the outside, both looked very similar. Yet the cover story was written by two different journalists, aimed at the cheap fine-dining options of their respective cities. Shared content between the two publications today includes recipes by Karen Martini, an introduction to po’boys (the hipster snack of the day) by Jill Dupleix, reviews of the latest Yotam Ottolenghi book, an interview with chef David Thompson, an article examining the craft beer of London and a “these are a few of my favourite things”-style piece with Movida chef and owner Frank Camorra.

But reviewers remain strictly city-based and plentiful, as do the wine writers. Fourteen of the 24 pages of the publication had local content (including ads). Epicure — of course — has more of a coffee and wine focus. Sydney’s Good Food ran an article about organic farming. Will the same-cover-story-rewritten-for-their-city theme continue? We’ll have to wait until next Tuesday. — Amber Jamieson

Along with boosting the share price, Joye used his AFR column today to offer some advice to his new colleagues on editorial independence: “Fairfax has only one purpose in life: to make money for its owners. Editorial independence is nothing more than a brand dimension. And if you don’t like the idea of maximising shareholder wealth, you should work for a public broadcaster.” The man is clearly on board.

Department of Corrections. An odd correction (of sorts) on The Australian‘s media diary yesterday from News Limited stablemate Piers Akerman. On Monday, Nick Leys told the charming story of Rupert Murdoch attending the 1990 AFL grand final won by Collingwood and on Sunday was in the newsroom for the launch of the merged Herald Sun the next day. Leys said Murdoch saw Akerman, the first editor, was going to run Kerry Packer’s heart attack on the front page but demanded it be “ripped up and a new one marking Collingwood’s win” designed.

Which is not how Akerman remembers it. Leys quotes him:

“He [Murdoch] sketched out a poster, which he subsequently discarded. He didn’t rip up any front page. There was never any doubt as to what the biggest news story of the day was. It ran under the splash headline ‘Packer Fighting’. But footy remained the dominant theme. The other first edition front page stories were related to the GF … Mr Murdoch did suggest we change the Shaw photo for a more dramatic picture on the back page (the first sports page) for one taken Saturday at quarter time.”

“Let that be the final word,” Leys writes. Indeed.

Front page of the day. The Courier-Mail in Brisbane splashes with the search for the “Dragon”, with fears its six passengers may have perished in a crash. 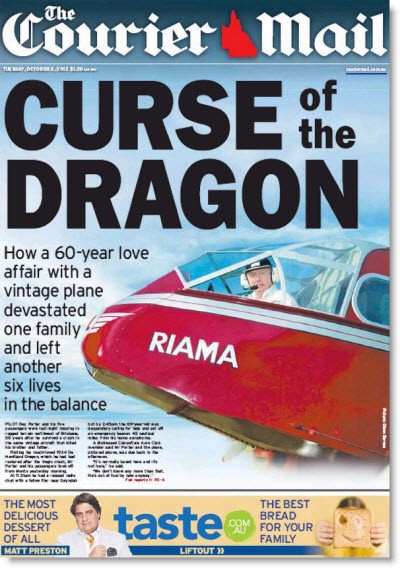 “Australia’s advertising market is ‘uncertain and volatile’ with print and television under continued pressure and only 0.7% growth expected for next year, according to ZenithOptimedia’s global adspend forecasts.” — mUmBRELLA

“Remember Al Jazeera, the network that was supposed to be an Arab CNN, offering a counterweight to Western cable news? That plan appears to have been scaled back as the Qatari government-controlled network makes deep cuts in its English-language news-gathering operations and shifts its focus to sports.” — Bloomberg

“New Orleans is famous for marking death with a celebration, and this was no different. More than 300 current and former colleagues, family members and well-wishers gathered to raise a final glass to The Times-Picayune’s 175-year run as a daily newspaper.” — The New York Times

“Swedish furniture giant Ikea has landed itself in hot water in its home country after women and girls were airbrushed out of some of the pictures in its Saudi Arabian catalogue.” — AAP

Is Peter Blunden the most thin-skinned editor in Australia?

Joye will clearly go far, particularly with Gina as a major Fairfax shareholder.