It doesn't look good for Mitt Romney and the Republican Party. And there's a host of excuses why. Crikey previews the race before landing stateside this week. 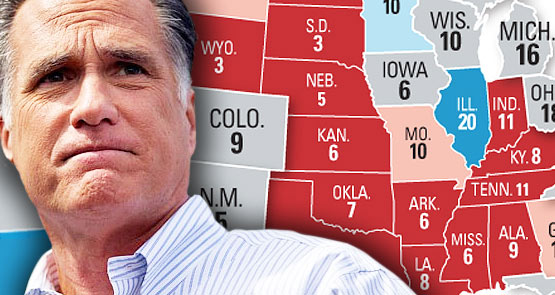 With just under six weeks until the November 6 election, all portents and omens bode ill for Mitt Romney and the Republican Party. Having failed to gain any sort of post-convention bump in the polls at the end of August, the Right has also suffered badly after the Democrats gained a 2-3-point boost at their end of their shindig in Charlotte. Usually, such boosts dissipate after a week or so.

In this case, it didn’t, leaving Romney with a two-point gap — which was exacerbated when a tape emerged of him telling a group of fund-raisers in Florida that 47% of the population were scroungers and parasites, whom he didn’t particularly care about. After that, and with a new range of ads in swing states focused on Romney’s wealth, low tax payments and involvement with predatory outfit Bain Capital, the numbers have started to widen considerably. Gallup daily tracking has Obama with a 5% lead, 49-44 over Romney, and Rasmussen — a right-shifted outfit that biases an average of three points towards the Republicans — has Obama at two points ahead, thus essentially agreeing with Gallup.

In the swing states, many of which were running at virtual evens until a week or so ago, Obama’s lead is solid: up 6% in Ohio, 3.2% in Florida, Colorado by 3%, Iowa by 3.7%, Nevada by 3.8%, Virginia by 3.9%. The only close state is North Carolina, where Obama leads by 1.1% — yet two weeks ago, the state was clearly in the Romney camp by about 2%. Missouri is in Romney’s camp by 7% — but that was a Republican win in ’08 in any case. GOP hopes that it could pull Wisconsin and Michigan into contention have come to nought — after dipping towards a 1% lead for Obama, they have now widened out to 7.8% for Wisconsin, and 8.8% for Michigan. Indiana was a Democrat win in 2008 — it remains the only state that Romney is virtually certain to win back.

These new results mean that most pundits have re-sorted the swing states list, leaving few in contention. North Carolina is now the only genuine toss-up state, and the 538 electoral college votes have been sorted out into a cool 332 to Obama, and 191 to Romney.

The scenario leaves Romney with no real path to victory — there’s no soft states that would offer the GOP an entry point. It was difficult for the Right to track a victory that was not a landslide, winning  Ohio and Florida, and gathering small states around them. Dick Morris, the sleazebag former Clinton adviser, and now desperate anti-Obama pundit, has argued that Romney has “11 paths to victory” without winning Ohio. He fails to mention that that is “11 paths” out of a total of two to the power eight, i.e. 256 possible results.

The dismal results appear to have made the Republicans worse rather than better. At the moment it is literally impossible to keep pace with the GOP gaffes. Over the weekend Ann Romney said that her greatest fear was that being in the White House would “drive her husband mad”, while Paul Ryan refused to explain Romney’s tax plan to an interviewer, saying it would take “too long”. There is no real theory to explain the ineptitude of the Republican campaign, save that it is doing absolutely everything wrong: cruelty, obtuseness, and a deep, deep desire not to win, and doing it all simultaneously.

Meanwhile, Republican loyalists have developed a new theory — that the polls are skewed towards the Democrats, run as they are by the liberal media. All sorts of theories are floating around, from the idea that registered republicans are under-sampled in the polling (they aren’t), to the idea that Democrats are more likely to be polled, because Republicans have too much to do to answer pollsters’ questions.

Such opinions have always been part of the Tea Party/Republican undergrowth — even when it was clear that averaged polls are increasingly accurate, the closer one gets to the election. But now the “skewing” story has become part of the official story, pumped out of places such as National Review. This is partly necessary of course to get the vote out — involuntary voting, likely defeat makes it harder to get the vote out, and becomes self-fulfilling. But it may also be genuine delusionality on the part of the GOP.

You couldn’t blame them — at the moment it looks likely that they will not only lose the White House race, but won’t get the Senate either — indeed, with Elizabeth Warren now leading by five points in Massachusetts, the GOP vote may go down in the Senate, losing them a seat. There’s still plenty of time for it to turn around, and four debates over the next four weeks … and on past form, eight more Romney gaffes.

[There’s still plenty of time for it to turn around, and four debates over the next four weeks … and on past form, eight more Romney gaffes.]
Delicious stuff Guy.

There are only three presidential debates: October 3, 16 and 22. There is also one debate between between Biden and Ryan on October 11.

This is all very basic stuff and not hard to get right. Presumably Guy’s estimate is now 6 Romney gaffes and an unknown number from both Biden and Ryan, both well-known gaffaholics.

There is nothing in this article that a bit of reading of online American magazines (New Yorker, Atlantic, Salon, Slate, Politico etc) wouldn’t get you in a more readable and coherent form.

Dont forget the Diebold factor, In Ohio in 2004, Diebold machines produced some very strange results especially in previously democrat booths. They appealed, but of course it was too late. Diebold corporation donate to the republican party.

What is happening with the push by the Republicans to pass legislation on voter registration- you know where a person needs the appropriate identification to be able to vote? Can anyone update where it is at?