One thing is certain from the weekend grand finals for the AFL and NRL: rugby league has a much stronger following in Melbourne than the AFL has in Sydney. Plus, The Australian's price rise and other media news.

NRL in Melbourne beats RL in Sydney. One thing is certain from the weekend grand finals for the AFL and NRL: rugby league has a much stronger following in Melbourne than the AFL has in Sydney, despite the Swans’ winning ways since 2005. The Melbourne Storm’s win last night was watched by a record 751,000 in Melbourne (two third the 957,000 who watched in Sydney, the heartland of the game). In contrast, 609,000 watched the Swans win in Melbourne (the record for Sydney was back in 2005 for the win over West Coast when 991,000 watched).

The $100 million or more the AFL claims to have ready to spend on promoting greater Western Sydney in Sydney might very well be the biggest waste of money in Australian sport if a team in its third grand final in seven years can’t get to the previous record TV audience. The NRL, Nine and News Limited (which owns the Storm) have had to ride the salary cap-cheating scandal with the Storm and a seemingly indifferent media at times and public. Nine in fact has not helped a lot by burying Storm games in the dead of Friday night or early Saturday morning. — Glenn Dyer (read the full story here)

Oz price hike. The Australian’s weekday cover price went up 18% today, from $1.70 to $2. Quite a jump, but well behind The Australian Financial Review at $3 a pop, and the same as The Age (which hit $2 in August). Although when reading the announcement in The Weekend Australian, it sounds more like an Alan Kohler tax than a standard price rise … 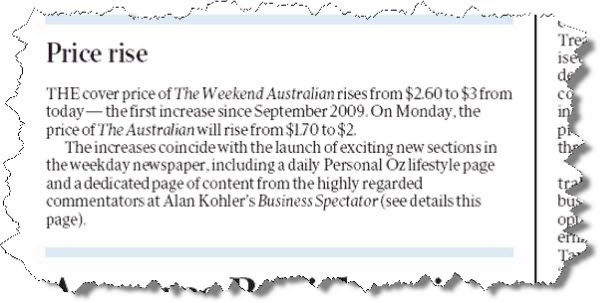 The Weekend Australian rose 11% to $3, pitching it at the same price point as the weekend edition of The Australian Financial Review. The price hike means The Australian is now twice the price of its Sydney cousin The Daily Telegraph and 67% more than the Herald Sun‘s $1.20. In other hard cover news, printers will protest outside Fairfax’s Media House in Melbourne at noon against job cuts at the Tullamarine presses. — Crikey intern Sally Whyte

Front page of the day. Mitt Romney’s personal wealth has become one of the biggest issues in the US election, explains the latest Washington Post. 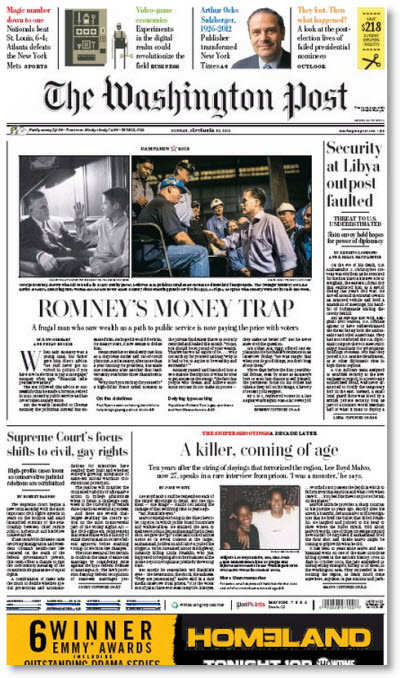 “There is a real danger that, because some newspapers allegedly behaved in a criminal manner, efforts will be made to reduce the whole press to an emasculated cipher of high-minded opinion.” — The Telegraph

“Apple’s plans for an internet radio service have hit a snag over the licensing of music controlled by Sony/ATV, which recently became the world’s biggest music publisher.” — The New York Times

Is it OK for videoed suicides to be playable online as news stories?

“Live coverage of a car chase on Fox News turned into a grisly spectacle Friday afternoon when the suspect got out of his car, stumbled down a hillside, pulled a gun, and shot himself in the head. As the scene unfolded, Fox News anchor Shepard Smith grew increasingly apprehensive, then yelled “get off it, get off it!”, belatedly urging the show’s producers to stop the live feed as it became obvious the man was going to do something rash. The station cut awkwardly to a commercial just after showing his death.” — Slate

“Ted Baillieu has foreshadowed possible legal changes to address the impact of social media on jury trials, after Victoria Police asked Facebook to take down one page which could influence the Jill Meagher case.” — The Australian