Vietnam's pursuit of a seat in the UN is not being helped by its mistreatment of journalists and bloggers. A number have been intimidated and even jailed, writes Monash University's André Dao. 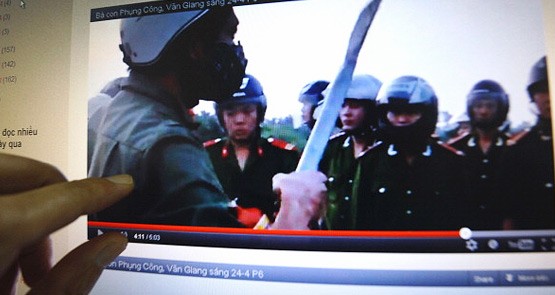 On September 24, 2012 — exactly 30 years to the day after Vietnam became a party to the International Covenant on Civil and Political Rights — three Vietnamese bloggers were convicted and sentenced to lengthy jail terms for “conducting propaganda against the Socialist Republic of Vietnam” after a short trial that lasted only a few hours.

“Their crimes were especially serious with clear intention against the state,” Ho Chi Minh City People’s Court president Nguyen Phi Long said, adding that “they must be seriously punished”: “They abused the popularity of the internet to post articles which undermined and blackened (Vietnam’s) leaders, criticising the (Communist) party (and) destroying people’s trust in the state.”

The decision stands in stark contrast to Vietnam’s avowed interest in pursuing a seat on the UN Human Rights Council for 2014-2016. In light of the government’s official stance that it is actively involved in protecting human rights, it’s worth examining what these bloggers actually did to warrant sentences (in two of the cases) of a decade or more in prison.

All three bloggers were founding members of the Club for Free Journalists, which was founded in September 2007 to promote freedom of the press, freedom of expression and human rights.

High-profile blogger Nguyen Van Hai, 60, who blogs as Dieu Clay (Peasant’s Pipe), was sentenced to 12 years in prison, with an additional five years of house arrest upon release. In 2009, he was awarded the prestigious Hellman Hammett award for writers who have shown commitment to free expression and courage in the face of political persecution. He used his blog to call for democracy and an end to corruption in Vietnam. He also reported on protests held against China and a call to boycott the Beijing Olympic torch relay when it passed through Ho Chi Minh City in 2008.

That same year he was sentenced to two-and-a-half years in prison on trumped-up tax evasion charges. When his prison term finished in October 2010, prison authorities refused to release him and he has remained in prison until his trial and sentencing this week. In 2007 Nguyen wrote on his blog: “Vietnam does not have the rule of law; it only has the rule of the party. The law was compromised to protect police officers and party members who abuse power.”

Former police officer and Communist Party member turned dissident, Ta Phong Tan, 44, was sentenced to 10 years in prison, also with an additional five years of house arrest upon release. She was awarded the Hellman Hammett award in 2011 for her work as a freelance journalist and blogger. Since 2006 she wrote regularly for the website of the BBC’s Vietnamese service, which led to her Communist Party membership being revoked. In November 2006 she started her blog Cong ly & Su that (Truth & Justice), which contains more than 700 articles about the mistreatment of children, official corruption, unfair taxation of poor people and the widespread abuse of power by the police in Vietnam.

In 2010 she wrote on her blog: “An article I posted on my blog which retold a dream I had (‘Last night I dreamt of meeting the old Marx’) was accused of ‘distortion.’ This Vietnamese state even controls people’s dreams. The people only have the rights to dream as they are told.”

Phan Thanh Hai, 43, was the only blogger to plead guilty. He received a four-year sentence, with an additional three years of house arrest upon release. He was also awarded the Hellman Hammet award in 2011. He blogged under the name Anhbasg, or Anh Ba Sai Gon, about the need for government transparency, freedom of expression and freedom of association.

In 2007 he wrote on his blog: “Blogging is an escape route for those whose ideas and actions are imprisoned. It allows one to express resistance against injustice and violence. Blogging is where an individual can express his/her desire for freedom.”

The convictions and sentences were roundly criticised by NGOs, including Reporters Without Borders, Amnesty International, and Human Rights Watch. A friend of the bloggers, lawyer and activist Le Quoc Quan, said that the sentences were worse than he expected. In May, on World Press Freedom Day, US President Barack Obama said: “We must not forget others like blogger Dieu Cay, whose 2008 arrest coincided with a mass crackdown on citizen journalism in Vietnam.” And less than two months ago, Ta Phong Tan’s mother Dang Thi Kim Lieng reportedly committed suicide by setting herself ablaze in protest to the government’s treatment of her daughter.

“Vietnam does not have the rule of law; it only has the rule of the party” — jailed Vietnamese blogger Nguyen Van Hai.

The bloggers were convicted under article 88 of Vietnam’s Criminal Code, which provides a punishment of three to 12 years imprisonment for acts as vague as “defaming” the government, fomenting “confusion among people” or making documents “against the Socialist Republic of Vietnam”.

Yet, as Nguyen Van Hai said in court before his sound was cut off: “According to Vietnamese laws, citizens have the right to freedom of speech and it is in accordance with international treaties to which Vietnam is party.” In fact, article 69 of the Vietnamese constitution expressly says that citizens are “entitled to freedom of speech and freedom of the press”. Article 19 of the International Covenant on Civil and Political Rights, to which Vietnam is a party, also guarantees freedom of expression, subject to lawful and necessary restrictions. In their general comment on article 19, the UN Human Rights Committee expressly stated that the penalisation of a journalist solely for “being critical of the government or the political social system espoused by the government” can never be a necessary restriction of freedom of expression.

So where does that leave Vietnam’s record on free speech? Reporters Without Borders ranks Vietnam 172 out of 179 countries in its Press Freedom Index for 2011/2012 and includes the country in its list of “internet enemies”. It’s not hard to see why. On September 12, Prime Minister Nguyen Tan Dung took personal responsibility for the suppression of free speech by ordering the Ministry of Public Security and Ministry of Information and Communication to shut down political blogs that the government disapproved of and to punish the people behind the blogs. A proposed decree on management, provision and use of internet services has drawn sharp criticism from the global network initiative and the US embassy for being too vague in its prohibitions on acts of expression.

The shocking severity and arbitrariness of these convictions can only further add to the evidence that Vietnam is going backwards when it comes to protecting freedom of expression. It should also prove an insurmountable stumbling block to their bid for a seat on the UN Human Rights Council — but then again, Gaddafis Libya was once elected chair of the council. If nothing else, it should mean that Australia, which engages in bilateral human rights dialogues with Vietnam, uses its influence as Vietnam’s eighth-largest trade partner to secure the release of all bloggers and journalists currently in prison.

It’s very 1984 isn’t it? “Winston dreams about meeting O’Brien in a place “where there is no darkness”… Through brainwashing and shock treatment, the Party ultimately controls Winston’s dreams. Only then do they truly control Winston”.

I figured Vietnam’s record was always going to be dubious given it censors its Internet so thoroughly.

From the Universal Declaration of Human Rights (UDHR):
http://en.wikisource.org/wiki/Universal_Declaration_of_Human_Rights

“Article 19
Everyone has the right to freedom of opinion and expression; this right includes freedom to hold opinions without interference and to seek, receive and impart information and ideas through any media and regardless of frontiers.”

From the Universal Declaration of Human Rights (UDHR):
http://en.wikisource.org/wiki/Universal_Declaration_of_Human_Rights

“Article 19
Everyone has the right to freedom of opinion and expression; this right includes freedom to hold opinions without interference and to seek, receive and impart information and ideas through any media and regardless of frontiers.”