New data released by the Australia Council confirms stagnating audiences for the nation's largest performing arts organisations. But companies say it's not as bad as it looks.

The Australia Council has released a report detailing flat growth in audience numbers for the nation’s largest performing arts organisations. On the upside, the finances of the sector appear to be in good health.

The report, a snapshot of key trends in the best-funded part of the Australia Council’s responsibilities, covers 10 years of data for the 28 so-called “major” performing arts organisations, such as Opera Australia, the Australian Ballet, the major orchestras, and the state theatre companies. Collectively, these organisations reach more than three million Australians annually and employ over 8540 artists and cultural workers.

Importantly, Australia’s major performance companies are doing well financially. The report says that financial reserves have quintupled in the past 10 years, and box-office revenue has increased by 51% to $176 million. Sponsors and donors have also been more generous, with sponsorship and philanthropic revenue more than doubling to $66 million. Governments have played their part too, with government grant funding increasing by $53 million in the past decade, to a state and federal total of $157 million last year.

However, the report is not all good news for the big arts companies. Audiences were essentially flat across the decade, with attendances either levelling out or only slightly increasing from 2001. That means the increase in box-office revenue was largely the result of rising ticket prices, rather than growing audiences. 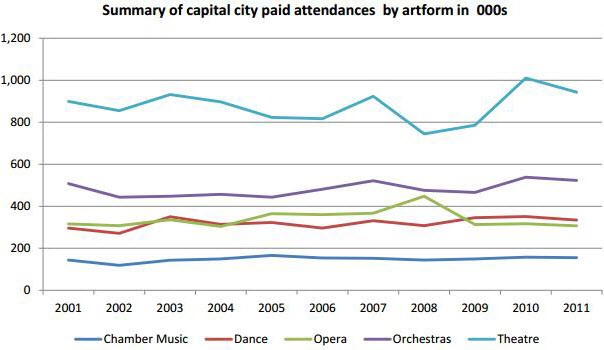 The report confirms recent analysis here in Crikey of audience data from 17 major performing arts organisations, which revealed stagnating audience totals across a range of different artforms. Given the population of Australia has increased by 3.1 million people in that decade, audiences are actually going backwards in per capita terms.

AMPAG, the main lobby group for the major performing arts companies, puts a much rosier interpretation on the data, arguing in a media release the sector is “stable and well-managed”. According to AMPAG’s Bethwyn Serow: “Despite the sort of shock waves companies have navigated recently such as the GFC, floods in Queensland and the two-year refurbishment of Hamer Hall in Victoria, they have shown strength and maturity in continuing to deliver strong results.”

The Australia Council’s Tony Grybowski also stresses the stability of the sector. Speaking to Crikey yesterday, he argued the aggregate figures disguised some strong performances by individual companies.

“The aggregate figures are flat,” he conceded, “but when you look at the individual companies, there are some real success stories.” Grybowski points to the improvements made by the Sydney Dance Company in navigating a difficult period that included a federal bailout, the departure of star choreographer Graham Murphy and the death of Murphy’s replacement, Tanja Liedtke.

Grybowski is upbeat about Opera Australia’s prospects in particular, with next year’s Ring Cycle in Melbourne expected to provide a huge boost in attendances. “Lyndon Terracini [Opera Australia artistic director] is completely changing their business model, from 19 operas down to 10, but in a  different format,” he said.

This confidence may be disguising some concerning trends, however. As mentioned, the majors do not appear to be keeping up with population growth, and orchestras in particular remain highly dependent on government grants. Across the sector, grants last year represented about 58% of total orchestral revenue. This compares unfavourably with the major theatre companies, for whom government grants make up less than a quarter of their income.

In a recent spray, Terracini rather cheekily cautioned against high public subsidies for performing arts companies. “A very high percentage of government funding in an overall budget does not necessarily produce a better or more creative outcome,” he told The Australian. Terracini points out the company is less reliant on government grants due to increased box office and sponsorship revenue.

However, given the huge increases in competition for the attention and wallet of the average punter, it could also be argued that performing arts companies are holding their own. Total cinema attendances in Australia, for instance, are down about 8% between 2001 and 2011, while circulations for newspapers and magazines have collapsed.

The costly disease in our backing orchestras